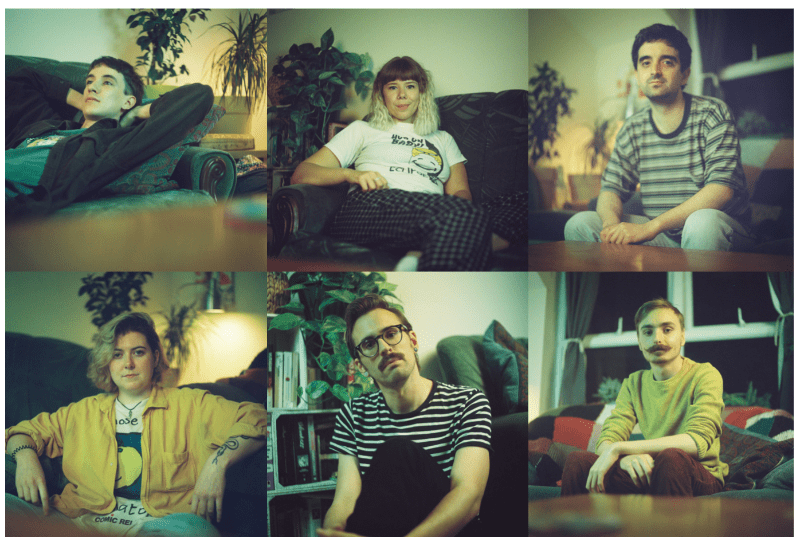 Bristol indie pop band Hamburger closed 2020 by releasing debut EP Teenage Terrified. The band consists of six friends who formed in 2018 after a chance encounter at a vegan fast-food place.

I’d been following their first single releases throughout 2020 and was hugely excited when their EP was launched. It did not disappoint, collecting a strong selection of songs that touch upon the shift and confusion that can be felt as we move from being a teenager into an adulthood.

The sonic forms of these songs are also gorgeously changeable, with ‘Agatha’ being quite low-fi, ‘Seafood’ embracing dream pop, and ‘All Hail Zebulon!’ the slacker anthem that we can all sing along to.

The beautiful and reflective feeling of the Teenage Terrified EP was a perfect way to end a challenging 2020 and shift into an uncertain 2021 – an experience which lends itself well to the confusing and often trepidation filled feelings of being a human that are reflected in these songs. Hamburger are making the music that we all need right now.

Just to give us a sense of where you are at right now, what have you been doing today? How are you?

Katie: Working for the man, wishing that I wasn’t whilst really feeling the cold in my fingers!

Fearghall: Procrastinating from language practice via Julie Doiron and crumpets.

Liv: I sat patiently waiting for my Christmas gift to myself, new headphones, to arrive. Praise be for the Argos clearance eBay store.

What music influenced you when you were growing up?

Katie: Dad’s music of course! A lot of ELO, Adam and the Ants, Beatles, David Bowie – classic stuff. I went through a Top of the Pops stage when I was really young, followed by a mini hip hop/RnB stage influenced by my brother. Then like all teens, I did the whole emo/pop-punk thing.

Tom: I pretty much had the same deal as Katie. The music my parents played when I was growing up most certainly instilled me with an affinity for guitar-based pop songs.

Fearghall: I was lucky to have an older sibling to mooch music from. So pretty early into my teen years I was getting obsessed with Elliott Smith & Joanna Newsom. I remember sneaking into my older brother’s room to “borrow” Beck’s ‘Sea Change’ and managed to break the CD case. 11 year old Fearghall was not smart enough to swap the case with one of a less loved album. I got in shit for that.

What artists do you admire right now?

I love that the band formed over a chance meeting at a vegan fast-food place – could you tell us more about this and how the band came into fruition? And what is your favourite vegan fast food?!

Fearghall: Myself and Tom had met through Katie at a Frankie Cosmos show a week earlier. I was buying a very hungover burrito and 100% looked like shit and suddenly this very pretty boy was talking to me about all the bands I liked. Mike and I had been throwing some ideas around but Tom was the spark that kicked the Hamburger into life. From then it was all about peer pressuring our pals to play music with us and thank Zebulon they did.  Fave fast food is a cheapy vegan hot dog with many onions atop.

Your music is so beautiful and reflective (for example, ‘Supersad’ is about a superhero whose powers are of no help to them after a breakup) – could you tell us more about your song-writing process and the topics that you are inspired to write about?

Fearghall: We birth our songs in many different ways.  Some of them need a long time in the chrysalis before they emerge, some of them pop out fully formed and wriggling, lots of the poor things never make it at all. Invariably the chords and melody are the beating heart of the songs. Lyrically the initial feeling behind the songs are almost always personal. ‘Supersad’ was written when a close friend was going through a difficult breakup. I think finding that supernatural parallel for a very earthbound experience is partly an emotional amplifier and partly an excuse to have fun with language. So, when we play the song I don’t think of a superhero I think of my friend.

Your music releases this year have been amongst some of my favourites of 2020.  As a listener, it’s been so exciting seeing each of these coming out, with each of them being quite different but equally striking. How has it felt, as musicians, releasing your first material as a band? What are your main thoughts and feelings as you put your music out there?

Katie: To be honest it feels all very fast. It feels like only a few months ago we were sitting nervously in Fearghall’s house singing our first songs together. So, the whole process of making this EP has been so exciting.

Tom: None of us are naturally that confident so there was an inherent apprehension to putting music out into the world. We’ve had to throw away all our imposter syndrome doubts and believe that people are listening to our music the same way we listen to others’. The really warm feedback we’ve received has been heart meltingly lovely.

You have your first EP, Teenage Terrified, coming out this month – could you tell us more about this, such as how you selected the songs for it?

Fearghall: Yeah, so it’s out now through the lovely Specialist Subject Records and it’s all come together over the last year. The song selection was half meticulous planning, half working within one’s means during a pandemic and half complete chance. Our songwriting influences are diverse, our feelings in life are diverse and so I guess it makes sense the songs we write are diverse too. I find the idea of finagling all the various misshapen moods into something coherent very appealing and I think it will be reflective of the material we make in the future. I hope with ‘Teenage Terrified’ we’ve made something that sounds whole.

I love the vibrant cover art for your singles and the new EP – could you tell us how you select these and who designed them?

Tom: All of our artwork was made by our one and only Doug Hayman. We all came up with a bunch of vague ideas at the beginning but pretty much everything was down to him. He did such a wonderful job of translating the aural aesthetics into cool shapes and colours. There’s a bunch of little Easter Eggs he snuck into the cover so 5 points for every one you find.

What TV shows and books did you enjoy most this year?

Tom: I’ve reverted to my 12 year old self this year by re-watching Naruto and reading The Edge Chronicles. Zero regrets.

Katie: I set myself a 20 book challenge, which when it came to November I had to shrink to 15. I’ve been reading a lot of classics and graphic novels. I have also smashed through all of Adventure Time for the millionth time!

Liv: I watched through seasons 1-9 of The Simpsons for the blursteenth time. Perfect comfort TV during this trying time.

How are you coping with everything during the pandemic, and the lack of live physical shows?

Katie: Most of my social life revolves around band practice and live music events so that has really taken a hit. I have kept up with friends with the occasional walk and watched a few livestreams but I find most evenings I am really antsy to get out. Can’t wait to get a pint from a sticky bar, catch up and chat with the usual gig crowd/friends and then go towards a stage and stand swaying or bobbing to live music.

Liv: Cyberspace blows. I miss my buds. However, I do find livestream gigs mega cute. I just absolutely cannot wait until we can all comfortably stand around and listen to some sweet sweet live tunes in one room.

You have been doing some virtual live concerts – how have you found the experience of doing these?

Tom: We’re hoping to get recording new material safely and playing some shows but I’m staying sensibly pessimistic until things are looking better. As long as we’re back together, hanging out and playing music at some point in the near future then I’m gonna be happy.

Teenage Terrified is out now on Specialist Subject Records.