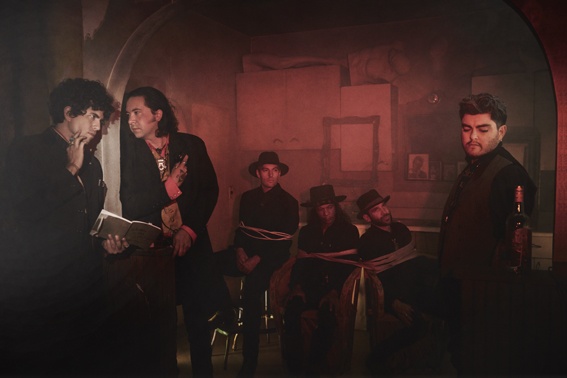 XIXA, the acclaimed six-piece band from Tucson, Arizona, have just released their brand new single, ‘Eclipse’. It is taken from their forthcoming album Genesis, which is out 19th February this year via Jullian Records.

Speaking about the new single, co-bandleader Brian Lopez says “…the chorus is intentionally written in a chicha-inspired major key, to give a sense of lightness and hope: ‘…Eclipsed by the wounds on my brother, eclipsed by the love we must find.’ A far departure, lyrically, from some of the darker themes that populate our music…But a fitting song and message for the time.”

His joint bandleader Gabriel Sullivan adds: “‘Eclipse’ explores what XIXA is about: dark and haunting landscapes as well as the uplifting and catchy melodies of Chicha music.”

The song is accompanied by a stunning video, filmed by Rebecca Noble, edited by Andrew Shuta, and directed by XIXA. The video is set in the band’s colourful, vibrant neighbourhood of Barrio Viejo in their home city of Tucson and reflects their heritage and the Chicano culture in which they grew up in the ‘80s & ‘90s.

Brian Lopez says about the video “it was important for us to visually tell a story of where we come from, where this music comes from. Given that the song is a cumbia, we wanted to showcase all these colourful mementoes that make Chicano culture so vibrant and unique to this part of the world. We grew up with all of it.”