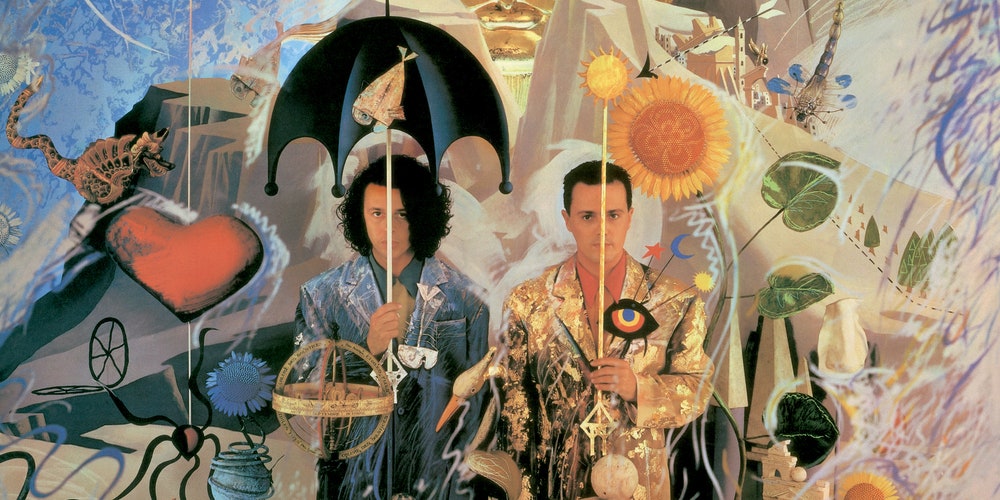 It’s the late 80s, I’m at an acid house club with my mates having the time of our lives. My memory says we were at the Shoom nightclub though that’s fuzzy to be honest. We did go there a lot but I can’t remember what club we were in, but I certainly do recall that the DJ behind the decks was the amazing Andrew Weatherall.

Among all the blissful house music pumping out, out of the blue he drops Tears For Fears‘ ‘Sowing the Seeds of Love’, the first time I had heard it and it sounded absolutely epic, with echoes of The Beatles ‘I Am The Walrus’ but reimagined for a fresh psychedelic acid house generation during the second summer of love – it blew my tiny young ecstasy-enabled mind.

Andrew Weatherall had a delightful habit of dropping big pop songs in his set as a cheeky surprise – surrounding by the beats, the bleeps and the power of the hedonistic sounds it somehow gave them more strength.

I remember him dropping other big pop tunes too – the Balearic leanings of Fleetwood Mac’s ‘Big Love’ being another, as well as the ridiculously joyous pop of The Style Council’s ‘Shout To The Top.’

An eternal image etched into my mind of one of those moments is of Kevin Rowland of Dexy’s Midnight Runners taking the knee footballer-style with a beer in his hand, smack bang in the middle of the Shoom dancefloor, whilst joyous mayhem went on all around him he managed to look so calm, drinking in the moment and maybe thinking about searching for the young soul rebels. The rulebook was being torn up before our eyes and we were delighted to be witness to it.

Hearing Andrew play ‘Sowing the Seeds Of Love’ – alongside the near religious experience of hearing Danny Rampling play a set, where the beckoning call would go out beforehand around Shoom “It’s starting, Danny’s on, it’s starting everyone” – taught me much about the power of the DJ and their amazing abilities as social communicators and who, with an active imagination and no little skill, could not only keep a venue full of people dancing in total ecstasy to tip top gorgeous dance music but also educate them on how to live a happy life.

The Dale Carnegies of dance music used the power of exciting music to totally move people, to delight them, and to give them something to go home and feel brilliant about AND to think about. This was our community, this was our football stadium, this was our home.

By the time ‘Sowing The Seeds Of Love’ arrived in 1989 Tears for Fears were an enormously popular internationally-known band with a string of big pop hits behind them.

And eight years on from forming in the city of Bath maybe some cracks were starting to appear in the relationship between Roland Orzabel and Curt Smith?

Certainly the album The Seeds of Love – from which ‘Sowing The Seeds Of Love’ was the first single to be taken – was in the main written by Roland Orzabal and keyboardist Nicky Holland and had supposedly cost a million pounds to complete.

1989 and the years leading up to it were a time of a politically divided country and ‘Sowing The Seeds Of Love’ does sound (at least in part) like a reaction to that. It certainly feels like a rallying cry for everyday people to get involved and help create a better world following three terms of Prime Minister Margaret Thatcher and her insensitivity to the suffering of working class people through her destruction of hard working communities, and her enabling of a massive divide between rich and poor. There may have also been influences in the song from Arthur Janov‘s book Primal Scream, from which Tears for Fears took their name and referenced throughout their career.

The thing about Tears for Fears is their music has lasted over time, often becoming more powerful and meaningful as the years pass. Certainly there have been a lot of people covering their songs in recent years and installing an update.

Great songs like ‘Sowing The Seeds Of Love’ give you – pound for pound – one of the best value for money items that you will ever own. They don’t break, they don’t need repairing, but they do have a magical power to translate their formation of notes and sounds into a feeling and an emotion to lift you or soothe you or, just simply, make you dance.

Memories of music have such power. They help you reference people, times and places once known and if they are good they can take you back and provide sweet tingly feelings of happiness as if you are back in the original moment.

Music once loved are like maps to a life well-lived, to stumble upon and cherish again and again.

I heard ‘Sowing The Seeds Of Love’ again tonight and it sent shivers down my spine, hearing the outro of ‘time to read all your words…’ caused me to pause writing this post – as out of the blue it has brought salty tears of love to my eyes.

I’m glad you are in my life, I cherish you as I do a friend, and in the meantime I’ll keep sowing those seeds.

2 thoughts on “Pop Classics #54: Tears for Fears – Sowing the Seeds of Love”