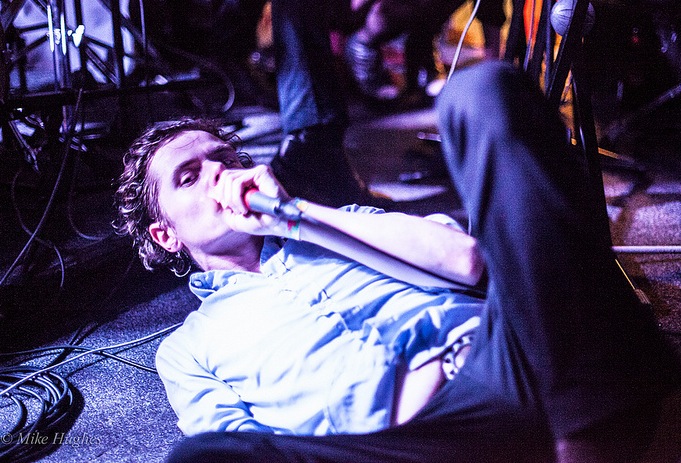 Based in and around Islington Mill, in the real and gritty bit of Salford that sure ain’t the glitz of the Quays or Media City, this was a fantastically vital event; for and by musicians and very far removed from corporate appropriation of our art form.

After dashing up the motorway and dumping the car in the street, I got there in time to spend 20 minutes drinking beer in Islington Mill’s sunny urban garden. I made sharpie notes in the programme, before it was time to schlep down to the end of Chapel Street to see The Cosmic Dead, who bill themselves as “Scotland’s foremost Hawkwind tribute band. And no less mind.” They were joined today by Manchester’s Karl Astbury, currently a member of Nine Black Alps, and also apparently myriad other projects. Considering they are not therefore a regular band, what happened next was fairly mind blowing. I can only describe it as a massive psych-fest all contained within one single 40 minute  jam. They never paused for breath. It was all very 2013 vs 1969 experimental, and despite having used the dreaded ‘E’ word, entirely engaging and great fun. After 35 minutes or so the stage manager was trying to give them the signal. Keyboard player gestured helplessly at drummer as if to say “it’s him you’ve got to stop“, and there appeared little chance of that. Having thus failed, the venue then turned the amps off. Karl picked up a wine bottle to sing into instead, rolling around amongst the feet of the tight packed crowd. By that time, the guitar was down to 3 strings.  James McKay ripped the remaining strings off the Fender. And no, he didn’t indulge in that trick of loosening them first, just ripped them off. Totally exhilarating. And you’re telling me they don’t regularly play together? Wow 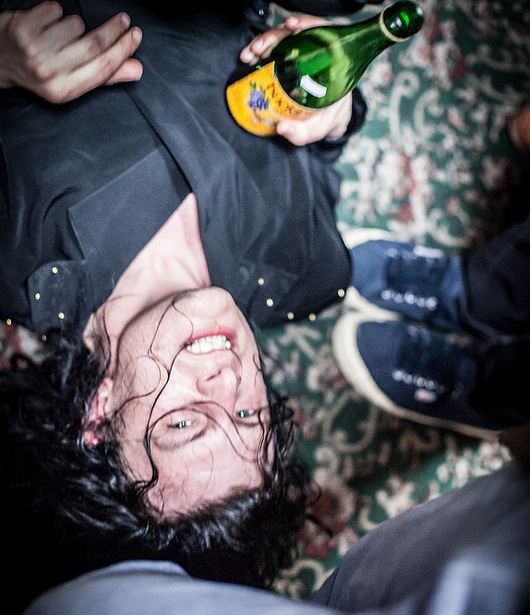 I was on adrenaline over-run already, so it was odd to stumble out into the bright early evening, and up the road to an arts centre. The draw here was another very avante-garde act, Die Hexen, who transpired to be just as gothically brooding as the name might suggest. Singer D Lucille Campbell performed from under a shimmery cloak, and as is her wont, peered at us through a mask made of lace. Slow building soundscapes coming to stuttering climaxes, very nice indeed.

Musicians seemed as evident in the crowd as on stage: I had chance for a chat with Phill Young, the man who has so impressed me recently in his Moses Gold guise. We agreed on how knocked out we were by the left-of-centre offerings to be enjoyed. Later in the night, I found myself standing next to sundry members of PINS who’d been playing elsewhere but were here to check out the goings-on.

Hunger took hold and I took solace in jerk chicken, served in the same community centre. Sated, it was then round the corner to the poshest venue of the day, the enchanting St Philip’s Church, in whose pews I’d last sat several years ago to watch Florence Welch when she was on the cusp of greatness. It’s a lovely venue, verging on the austere.

The band on here were Still Corners. I’d seen them before, in a much more sweaty Hoxton Square. Tonight they were atmospheric, helped by playing in total darkness, lit only by their own projections. I’m in two minds, it felt remote, but perhaps they suit an icy chill. Ultimately it engaged mentally but not so much in the heart as other bands that day.

Next up, and headlining St Phil’s, were Stealing Sheep. They are a band whose music it is easy to fall in love with. Tonight I was smiling to see Becky sat quietly on the stage beforehand getting in some last minute recorder practice.

They were late on though, granted taking as much time as was necessary to get their quite complicated stage set up. Next thing was, they disappeared outside. What’s this? I could hear the distant sound of a marching band, suddenly louder as the church doors opened and the girls led the troupe in, Lucy banging on a big bass drum. All of them, marching band included, came down the aisle scattering those who had decided to sit there instead of the pews, and wound their way onto the stage. The audience, having been got to their feet, stayed on them and crowded up as the Sheep got into their stride. The staid atmosphere was broken and the party started.

I stayed for one song but scheduling (and that 40 minute delay) was getting the better of me, so I made a dash across the road to the wonderfully down-at-heel Crescent pub, replete with minuscule stage and even smaller stage lighting. It was a busy weekend for Post War Glamour Girls, they’d also been playing a hometown set at Live At Leeds. Here in Salford, they’d just taken the stage as I pushed my way to to the front. I’ve never seen or heard them before and was riveted by their delivery; straight forward post punk, delivered with sincerity thankfully devoid of schmaltz. As they finished up, they offered to sell us broken Ken dolls from their car boot round the back of the pub. I was tempted but decided instead to cling to the stage and wait for Parenthetical Girls. (I don’t know if it was a theme night, but September Girls had also played the same venue earlier.) 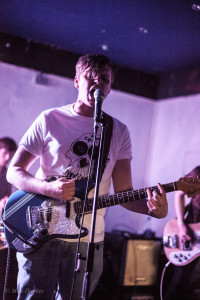 Parenthetical Girls are out of Portland, Oregon and had been the deciding factor in my decision to make the drive to Salford today. They surveyed the stage dubiously and by the time they’d crammed all their gear on, had to climb through and under things to get to their places. They graciously said this was just the sort of venue they loved, and were I think telling the truth. Despite the name, they are one girl and three guys led by Zac Pennington. Theatrical, affected and effete in the best possible way, typified by ‘The Common Touch’ off their latest album which includes quavery lines about “coming out of my mother“; it all  sounds as though it might have been first performed by a Victorian society for the promotion of melodramatic theatre. In the hands of, say, Rufus Wainwright, it would have been wrist-slittingly bad, but here it was glorious. Zac literally climbed the walls, balancing precariously along a ledge over the audience, before taking on a lone heckler, who Zac insisted was a lovely person and deserved to be heard.

Yes, there was a whole band there, but it was Mr. Pennington who spent most of his time in the audience on the end of a long mic lead, thereby utterly and completely stealing the show. We knew the show was over when he walked, still singing, right out of the pub into the street and shut the door behind him. Best band of the day by a country mile, I came away with one of their drugs-referencing tee shirts. I was in two minds when they later tweeted that this might be their last trip to the UK ever – saddened if that turns out to be the case, but oh so glad that I’d had the chance to see them. 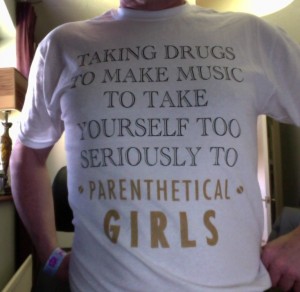