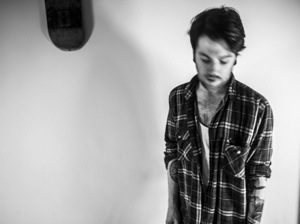 This week saw the release of the second album from Glasgow’s gloriously miserable Ewan Grant AKA Algernon Doll. If you’re a fan of Elliot Smith you’ll find it easy to get where Grant is coming from with his dark take on life. Where his debut was more acoustic and introspective his new album Citalo-pop is more upbeat and choc full of scuzzy electric guitar riffs.

I caught up with him last night just ahead of his album launch gig in Glasgow tonight to talk music and the still taboo subject of mental-health.

Thanks for talking to GIITTV. How are you?
I’m good man, pretty tired but good!

It’s your album launch tonight at Glasgow’s 13th Note, excited, nervous?
I’m really excited! I look forward to playing a lot more these days and, especially with the band, I don’t get nervous like I used to.

When did you start writing songs?
It’s hard to put a date on it but I started playing guitar when I was 11 and through my mid-teens I would write riffs and hardcore punk stuff. When I was 17 I started writing more structured songs, closer to what I do now.

How would you describe your sound to someone who’s never heard Algernon Doll?
Passionate, melancholic, dynamic pop songs. I’m still very inspired by the bands I grew up with in the 90s and early 2000s.

Where does the name Algernon Doll come from?
It’s from a short story called, “Flowers for Algernon” by Daniel Keyes. It’s about a mouse who gains intelligence through testing and the human that undergoes the same experiment. It works but then the mouse dies and all the human has experienced with his new found intelligence withers away. My idea was to create a guise to write under that described a human (myself) as a sort of life-test dummy, writing about my experiences and how helpless I am in this world.

What about the album title Citalo-pop?
Citalo-pop is forced pop music due to the anti-depressant, “citalopram”. I have a lot of struggles with bipolar
and anxiety disorder but recently I’ve been on this medication which allows these things to have less of an effect
and I find myself having the same depressing thoughts but they come out more as anger and frustration. The songs often sound more upbeat but I talk about the same bleak truths ha.

There’s quite a difference in styles (although definitely a link) between your debut album Camomile and Citalo-pop, was that a conscious decision?
I just feel that to be an artist I have to change and try new things. This new sound expresses how I feel right now much better. I also felt that I took the stuff on ‘Camomile’ as far as I could take it and I couldn’t do it justice live.

Are you working with a full band line-up now to accommodate the bigger sound? Is it a permanent group of musicians?
Yeah, it’s great being able to recreate every track perfectly. They all have their own projects too but I’d like to think so…
If they can put up with me being a benign dictator for much longer.

The last album was based on your battles with depression and anxiety, is the more upbeat sound of Citalo-pop related?
It’s mainly a different outlook on the same themes, more frustration, anger and angst involved ha. I’m getting to understand these things a bit more. It’s still a bit of a faux-pas to talk about mental illness but it’s really important to get it out somehow. It’s kind of tongue-in-cheek to see if anyone actually believes there’s some happiness on this record. It might be my process of luring people in to weed them out again, I do things like that. 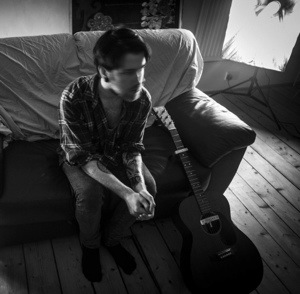 With such difficult and personal subject matter how does it feel to perform live?
It’s pretty liberating spitting it all out when a year or so ago I couldn’t be on stage without having some sort of panic attack. It might make other people uncomfortable but people take what they want from these things I think.

Do you have any other gigs coming up?
I have a house show on the 21st in Partick and I’m headlining in Edinburgh on the 4th of July.

What are your plans for the rest of 2013?
I think I’m going to do a UK and France tour in September whilst figuring out where I go from here musically.

Good luck with the album and tonight’s launch.