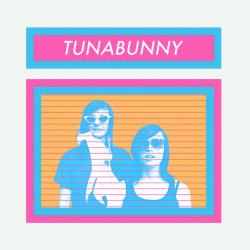 Athens-based-Girl-led-slacker-popsters Tunabunny have a UK tour coming up! They arrive in Cardiff on July 20th, but the tour starts July 17th(see full run dates below).The kind people at their label have given us the video exclusive to ‘Slackjawed’ the new single off the album ‘Genius Fatigue’!

” Five years in, Tunabunny find themselves getting a little attention. Bigger labels begin to sniff around. Journalists nervously describe the band as Riot Girl, apparently never having heard of the Swell Maps, or the Raincoats, or even Electrelane. Or even the goddamned Breeders, apparently.

Tunabunny continue to insist that being misunderstood is a compliment. But then what other choice do they have?

In less than two weeks, Tunabunny leaves for the UK. Will it end in stardom, or will it end in chaos? Does the band even care? What does success even mean? Is it Yoko Ono? Is it Grizzly Bear? Is it John Denver? Is it Teddy and the Frat Girls? Maybe success is having the freedom to do what you want the way you want to do iit without hurting anyone else in the process.