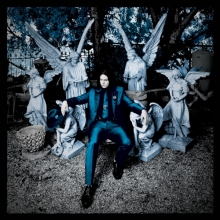 Lazaretto, the title of Jack White’s second solo outing comes from a place where sailors were kept in quarantine or Lazarus, a leper, or person god has resurrected. Jack White, ‘the king of comebacks’ probably intended the latter.

Lazaretto took eighteen months to record compared to The White Stripes’ most celebrated album, Elephant, which was recorded in only three days, for a Jack White album this is the equivalent of Brian Wilson‘s ‘Smile.’ For our first introduction to Lazaretto he showed his love of capturing the moment by creating the fastest-ever single release for this year’s Record Store Day. Jack White recorded the title track at Third Man Records in Nashville at 10am direct to acetate, the masters were then taken to a record plant who made the 45rpm single and created a sleeve from live photos of the show. The singles, which included a cover of ‘Power Of My Love’ by Elvis Presley as the b-side were on the shelves at Third Man Records just three hours and fifty-five minutes later.

The product of this is ‘Lazaretto’ which opens with a funk bass before tearing into the chaotic guitar riffs, his most recent project The Dead Weather can be heard through its dark and threatening keys, the song then morphs into a psychotic country fiddle hoedown. The Dead Weather grunge continues on ‘That Black Bat Licorice’, with a guitar intensity not unlike ‘I Cut Like A Buffalo’ along with sharp hip-hop induced vocal stylings and frantic breakneck drumming. ‘Three Women’ and ‘Just One Drink’ capture the essence of The Rolling Stones’ Exile On Main Street, through the honky-tonk piano, blues-inspired slide guitar and dusty harmonica.

Lyrically ranging from loneliness in ‘Alone In My Home’, sexual arrogance on ‘Three Women’ and the dry humour of ‘That Black Bat Licorice’, Lazaretto only crawls back to the lyrical influence of 2012’s Blunderbuss on ‘Would You Fight For My Love?’ Inspired by his work with Danger Mouse and Daniel Luppi on Rome, the musical arrangements move the song in a different direction, with its rolling percussion, driving piano and operatic backing vocals that evoking Ennio Moricone’s The Good, The Bad, And The Ugly.

With all the scorching guitars, anxious shrieks and looming keys, most notable on the Jimi Hendrix loving ‘High Ball Stepper’, it’s surprising that he found the time for the usual alternative country inspired rhythms and melodies. However it can be found on the Nashville country stomp ‘Temporary Ground’, ‘Entitlement’s Gram Parsons inspired harmonies and ‘Want And Able’s playful guitar, reminiscent of The White Stripes ‘We’re Going To Be Friends’.

With Lazaretto Jack White continues putting excitement, fun and freshness back into modern music. With help from the usual elements of garage aesthetics, sweltering blues riffs and timeless melodies, as always delivered with a sly smile in the corner of his mouth. From The White Stripes’ debut album to Lazaretto Jack White continues his work as a musical preacher, delivering a reinterpretation and manipulation of the past sixty years of musical heritage.