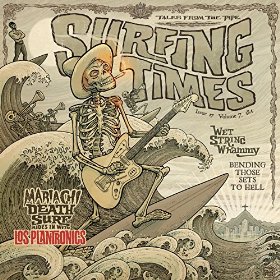 Unorthodox is the best way to describe wild Oslo nine-piece Los Plantronics. Firstly, it’s not music you’d expect to hear whilst sailing through the glacier fjords of Norway. Secondly, lead singer Kjetil Jakobsen calls himself the “Slim Slammer” and wears a Mexican Lucha Libre wrestling mask. Thirdly, they perform music that’s marinaded in Mexicophile spices yet is comical and pastiche. And finally, their new umpteenth album (they’ve been performing in their current line-up since 1996) had a music production process that is somewhat reversed. Flicking through a magazine one day, they inadvertently stumbled upon an intriguing illustration; a skeleton riding a wave with the headline “Surfing Times” arranged typographically behind. The slogan became the name of their new album and the skeletal comic book picture not only became the album artwork but a source of inspiration musically.

Los Plantronics have labelled their music “marachi death surf” but that doesn’t tell the whole story of an album that’s both spontaneous and stereotypical. Since the band is well populated, it’s no surprise that they have a large arsenal of instruments at their disposal, that ends up creating multi-national arrangements: stylophones, flamenco guitar, theremin, hammond organs, guiro, fuzzy guitar, trumpets, saxophone etc. This creates an album that although has a Mexican vibe at it’s core, freely teleports into other exotic environments.

Dramatic opener From Mecca to Mescalito is a good prototype of this concept even from the title alone, considering that Mecca is a city in Saudi Arabia and mescalito is a stimulant drug to intoxicate North American Indians in their ecstasy ceremonies. It begins by painting a spaghetti western standoff complete with non-diegetic whistling, the town bell and cowboy boots walking. A whip transition introduces an identical rendition of Dick Dale’s Misirlou (known in movie culture as the Pulp Fiction theme), in the surf guitar. This is not entirely surprising when you read that the band intentionally wanted to “rearrange six tunes from the golden era”. Thus formulating a musicologist’s dream quiz of “name that tune.” On a side note, it’s development into Arabic territory, could relate to Misirlou’s original origins as a traditional Egyptian song.

There are many other cases of sound-a-like tracks. Golden Dawn Surf Patrol’s staircase notes powered by the trumpet are reminiscent of Ray Charles’s Hit The Road Jack, but explore creativity in the vibraslap hits, fluttery piano, woodblock taps and theremin swirls. Zapatista Surfista will bring back memories of Jack Marshall’s The Munsters Theme and is made particularly creepy by wavy stylophone and a nervous Middle Eastern flavour. It adopts one of their idiosyncrasies of cinematic soundbites and like most of the tracks builds it’s energy faster and faster until a crashing climax. Red Hot is somewhere between Elvis’s Jailhouse Rock, Chuck Berry’s Johnny B.Goode and , in it’s authentic rock n’ roll stops and shred guitar. In this case, the Slim Slammer’s voice is distorted by a megaphone, which is a wise move considering that his voice isn’t particularly pleasing to the ear and requires one hell of an acquired taste. On an album dominated by instrumental improvisation, vocals are applied to Shortnin’ Bread Part II (which are throaty like a metal frontman), So Say You Lost My Baby (crooning passionately in a Las Vegas style performance complete with a water fountain finale), Mary Lou (punk rock shouting of Iggy Pop)

Lyrics aren’t a crucial addition to the festivities because they tiptoe around grouchy mediocrity and broken stories, whilst occasionally being incomprehensible. Lines such as: “Took my diamond ring, saw the gap. Took me keys and my Cadillac” won’t win any songwriting competitions. However, it is easy to get lost in the party atmosphere of space-surf (Moon Dawg), congo rainforest euphoria (Montezuma’s Revenge) and suspenseful Robert Rodriguez soundtrack (T for Terror). The historical and cultural hints suggested from the title names are a pleasant insight and display a richness, and n appreciation for traditions outside Norway. Shawnee is the name of a tribe in North America, Montezuma could relate to Apache activist Carlos Moctezuma or Moctezuma II (an Aztec emperor, killed during the Spanish conquest of Mexico), Zapatista is an insurgent group involved in the Mexican revolution and El Jeffe is a Spanish term for “chief”.

A mix of familiar hooks and exciting adrenaline should be a sign of success but unfortunately Los Plantronics and Surfing Times, in particular will be remembered for being knock-off copycats.