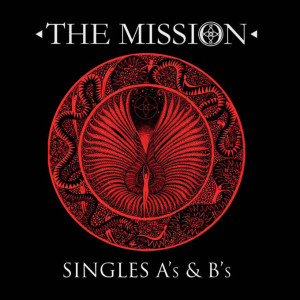 “I still believe in God, but God no longer believes in me”

It’s 1985, The Sisters of Mercy have recently imploded with uber-Goth Overlord Andrew Eldritch in one corner and his minions Wayne Hussey and Craig Adams aggressively snarling in the other. Inbetween them is a fog of legal wrangling and lawyers fees. Goth, like Bela Lugosi, is dead.

A year later Hussey and Adams have found reinforcements and come crawling out of the Batcave as the newly crowned saviours of the dark art and national sales of cloaks, wide-brimmed hats and Boots No7 go through the roof. The Mission are born(e). It is at this precise point that the 19 year old me forsakes his credibility and quite frankly, his dignity, by diving headlong into this murky, dark world although I did draw the line at make-up. I’m from Lincolnshire after all, we simply don’t countenance such behaviour.

No, it was that simple opening refrain to ‘Wasteland’, whispered in typical laconic fashion and swiftly followed by a soaring guitar riff which sucked me in and didn’t let go until Nirvana turned up and blew the cobwebs (some of them literal) away. I was a Goth and this is my story.

I find it scarcely believable that for many reading this, The Mission mean nothing. If they feature on your musical compass at all then it is merely as an amusing footnote, a pantomime bunch of northerners who got lost in the dressing up box and somehow regularly adorned the front cover of every musical publication known to man. The Mission were goth royalty and the press lapped up the Dark Prince of the Soundbite as if he were The Second Coming. But they weren’t alone, the band had the most devoted legion of followers with a hardcore known only as ‘The Eskimos’ who would travel the country and latterly the globe in a drunken pilgrimage, laying waste to each venue in a frenzy not seen since the last Viking 18-30 holiday.

In short, The Mission were big business and their career probably peaked in 1989 when they headlined the Reading Festival to an adoring black throng drenched in dry ice and eye-liner. How do I know all this? Well I was there wasn’t I? Every step of the way. Freud would probably have something to say about this time of my life, an era when belonging to The Mission family almost seemed more important than my own. Actually Freud would probably just say “You’re bonkers mate, get a life” and he would eventually be proved correct. I just had OCD when it came to The Mission.

‘Singles A’s & B’s‘ is a chronological collection of the bands’ releases throughout their initial years of popularity coupled with some B-sides and cover versions which were often more entertaining than their own material. We kick off with their first singles ‘Serpents Kiss’ and ‘Garden of Delight‘, full of talk about “shimmering skies” and “worshipped ways“, all standard goth fare back in those days swiftly followed by a cover version of Neil Young’s “Like A Hurricane“. Devotees of the great man may want to give this track a wide berth. This was The Mission formula back then, pen some weird anthems and back them up with the occasional left field cover.

Which brings us neatly onto ‘Stay With Me‘, their first bona fide ‘hit’. Nearly 30 years on, it’s shocking. Hussey was oft accused of hiding himself in Welsh hillsides, highlighting ethereal words in the dictionary from which he would then attempt to construct a song. It was almost goth-by-numbers. He was never going to get an Ivor Novello for writing “stay with me, lay with me, lay down by my side…stay with me, lay with me, take me deep inside“. I cringe as I type this knowing I have, on many occasions. bellowed these words back at him. What was I thinking?

All the hits are here, the previously mentioned ‘Wasteland‘, ‘Severina‘ and the percussive stomp-athon ‘Tower of Strength‘, always a live favourite as it provided the perfect opportunity to wave our arms around and construct a human pyramid. How I long for the days before the Health & Safety Executive came into being.

The first two albums ‘Gods Own Medicine‘ and ‘Children‘ provide the bulk of the genuine goth-fodder on show here before the third studio album ‘Carved in Sand‘ moved them more into the mainstream at the fag-end of the decade. In ‘Deliverance‘ you not only have the finest track The Mission ever recorded but it is a perfect template for the whole genre. It’s packed full of anthemic bombast, pseudo-meaningful wordplay and you get to throw your hands wildly in the air repeatedly. It’s what we did, don’t judge us..

The remainder of ‘Singles A’s & B’s‘ does little more than chart their downward trajectory, yet ‘Afterglow‘ appears to have weathered better than much of their material and cover versions of ‘Tomorrow Never Knows‘ and ‘Mr Pleasant‘ are nothing if not fun. If only they had included their cover of The Stooges ‘1969‘ too, always a live favourite. Taken as a collection, this must appear a confusing mish-mash of musical styles for the newcomer. It starts life as a spooky mansion on a storm-ravaged night and 36 tracks later it’s morphed into a bouncy castle at a kids summer birthday party.

So has history been kind to The Mission? Well, no not really. You will appreciate that it’s very difficult for me to be objective about a collection of songs which hold such memories for me, whether it be driving through the sparse Cretan countryside with The Mission blaring from a tinny 80s ghetto-blaster or badly twisting knee ligaments during the opening 30 seconds to their Reading 87 set. But deep down, on reflection, I know that much of what is on display here is no longer relevant to you young people. It’s a sub-standard Halloween party of an album. Safe, fun and utterly disposable.

Unless you’re an ex-goth in which case: