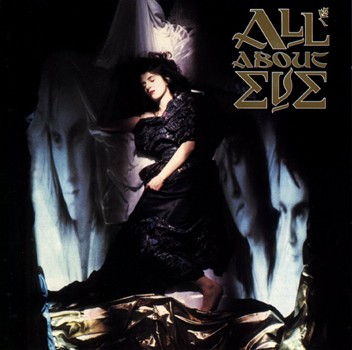 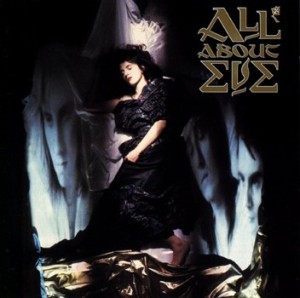 Been missing All About Eve? Well, miss them no more; here is a total of 72 tracks – count ’em – covering the band’s first two albums with the obligatory extended mixes, b-sides, live romps, radio sessions, the lot! You name it, it’s here and spread across four CDs of gentle Gothery.

With such a volume of material to plough through, one approaches this epic undertaking with keen trepidation and no little preparation. “No one here gets out alive” said Danny Sugerman in his truly terrible biography of Jim Morrison, and faced with such an overwhelming behemoth of whimsy – oxymoronic though that may appear – it seems a distinct possibility. However, requisite patchouli oil applied and sympathetic cat duly suited and booted with bangles and lurid purple lippy… We’re off.

And you know what? It’s not actually half bad. It’s not as good as I remember – we are here, dear reader, as All About Eve were the first proper band to ever fling themselves in front of my starstruck eyes – but still, not bad at all. It does sound exactly as you’d expect it to sound, looking at pictures of them – pastoral and bucolic and a plethora of terms invoking an England long gone, but then, so what? They looked like that, they sound like that… You can’t say you haven’t been warned.

The eponymous debut was originally released on Phonogram after being recorded principally at Manor Studios in Oxford.  The seeping in of that most gentle part of our green and pleasant land is laid across the entire effort. Folky strums, emotive and evocative vocals from Juliane Regan, an atmosphere of countrified whimsy, and a good job it is a sedate affair. Swaying Along to something like top ten hit ‘Martha’s Harbour‘ is one thing when you’ve still got 68 tracks to go, having a pop at a Motorhead marathon of the same magnitude may be beyond even this intrepid listener. To say nothing of the reluctant Catto the cat.

Next up, ‘Every Angel‘ takes us further into the territory of the Goth. There’s no getting away from it, though at the rather more commercial end of the spectrum than madmen like Fields of the Nephilim say, the Eve were (are) associated with such goings on. Nothing to be ashamed of, of course. Well, a bit, maybe. On the other hand, that meant my first gig was surrounded by women in black lace flinging their hands about, so one can’t complain.

Reissues of the expanded variety like this are clearly for the fans as opposed to drawing in new acolytes, but my feline friend and I enjoy the velvety drama of it all. None of it goes mental, but being entreated to “shelter from the rain” together whilst twelve-string guitars are caressed is romantically pleasurable. Note: I am not having an affair with the cat.

I’ll confess, listening to all this at once may not be the best idea, or even how it is intended for the less than entirely devoted, but the presence of ‘Devil Woman‘ looming in the distance at track 23 keeps things ticking along. Cliff Richard via black eye shadow is a prospect to keep anyone enthusiastic.  One thing is for sure: doing this review as a real time, chronological event would, by sheer magnitude alone, be a literary depiction of endurance, a mental breakdown, or the emergence of Ironman Criticism as a new sport. With a number of songs occurring in multiple versions, it all becomes quite disorientating after a while. Not necessarily in a bad way, mind.

Such digressions do the band, and the whole project, a slight disservice. For the devotees, this mass of material is a treasure trove. Though there were two later albums, Touched By Jesus and Ultraviolet, these first offerings mark the zenith for the group, both creatively and commercially. And for those less acquainted? Well, they fit easily into an English tradition including bands like Jethro Tull and Fairport Convention (whose Cropredy festival they headlined) whilst updating and occasionally giving a more spunky edge appealing to the black-clad throng. Though oft overlooked, they deserve their place far beyond being a mere side road in Gothic history.

It’s attractive stuff with the yearning simplicity of ‘Lady Moonlight‘, for example, being an exercise in lilting poetry. And there’s a sensuous purity about Regan’s voice, no doubt about that. Attaching itself with mellifluous ease to harmonious goings on.  Which is certainly not the case when the energetic cover of Mr Richard’s most baffling offering does eventually appear. It’s hard to know what to make of it.  It’s spirited for sure. By now madness has crept in, so a break is required. 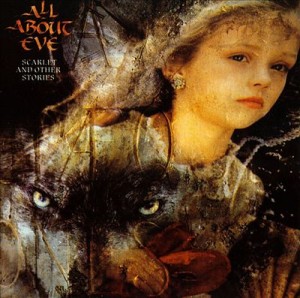 Regaining composure and marching on to the reissue of second album Scarlet And Other Stories we get the band sliding off their commercial peak. Although some years lay ahead, with various line-up changes, the numbers from the debut were never matched. This despite Glastonbury appearances, Royal Albert Hall gigs and support slots with The Cure amongst others.

Though Scarlet is again produced by Paul Samwell-Smith it’s possible to see why. A bigger sound, more populist, sounding almost tailored to the American market – slightly dubious guitar solos and all. Dare one say it, it touches on daytime rock in the first track ‘Road To Your Soul‘. A similar course was followed fellow travellers The Mission – who I was there to see the night All About Eve flounced onstage in support. It didn’t work out too great for them either.

As always, in pursuit if bigger dreams, there’s the risk of leaving fans behind. T’was ever thus and always will be. Regan’s voice still shines, shimmers even, but it jars slightly against the gloss. Sometimes bands don’t realise what they have until they lose it. And it’s rare to be able to grasp it once again.  For that reason it’s true there is perhaps less to say about Scarlet And Other Stories. It illustrates the direction of a band and indeed the faith of the record company; a record company that presumably helped stump up for David Gilmour (a choice telling in itself) to appear on the next, again less successful, album. And therein lies the rub. Be careful what you aim for. And who you listen to.

Notable perhaps is ‘The Dreamer‘ which rather incongruously features an almost funky drummer-esque backbeat and some enthusiastic abuse of the wah-wah pedal as was so beloved at the time; notable also for showing conclusively there always wasn’t a dance element to their music but still, an interesting curio.

The closing live material – recorded in London, Glasgow and Glastonbury – captures the essence of the group more than that which emerges from a studio lined with cash and misguided company largesse. Though it does at times take an unusual diversion into raggle-taggle territory, we can forgive them for that. They did tour with a nascent Wonderstuff at one point, and any band that shares a billing with Miles Hunt and doesn’t immediately resign from the record industry deserves a Brit Award for that alone. And our deepest sympathy and all the slack we can cut.

These performances reveal All About Eve in simplicity, showing more of their souls than when umpteen takes and added bells and whistles are required. As noted, far from a unique trajectory in the merry world of pop unfortunately.  This a comprehensive overhaul of the earlier parts of their career, though, for the uninitiated, I can’t say I recommend listening to the whole whack in one sitting. The cat is still sulking and jangling about in his cheap jewellery. Much like myself all those years ago now I think about it.