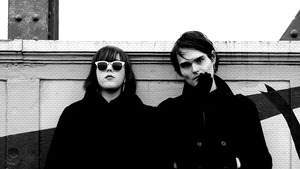 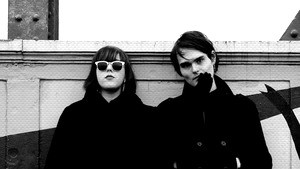 Ghostly London doom pop duo You The Living (Aidan James Stevens and partner Natasha Stevens), recently released the cavernous sound of their debut album ‘XXXI’.To celebrate we asked one half of the You The Living partnership guitarist/vocals/programming Aidan James Stevens(whose year of severe ill health informed the albums sound and anguished themes)to talk us through each of the album’s tracks:

This was the first song I wrote for the album lyrically, but the last I wrote musically. I had the lyrics sat in my orphaned lyrics folder until I decided that the album was lacking an opener, and these lyrics were perfect to set the tone for the whole record. I love openers that build up from nothing to a massive crescendo – Dir En Grey’s Conceived Sorrow, Muse’s Take A Bow, and Nine Inch Nails’ Somewhat Damaged were all huge inspirations for Grief.

It’s about my recovery from seizure-causing mould poisoning, and how I was simultaneously glad to get rid of it, but drained by the process of ascertaining what the problem was and getting rid of the flatmate that caused the problem. When I found these lyrics after the whole painful ordeal that inspired most of the record, I couldn’t resist the delicious irony; it HAD to be the first track!

Naked was the first song I wrote for You The Living. I was angry about the direction of the band I was in, and agitated by the situation surrounding its last single and video release. I needed to pursue my own artistic goals, and I needed catharsis. After seeing Nine Inch Nails’ half electronic/half rock set at Reading, I felt like it was a funeral to my rock band, and the birth of the electronic project I always wanted to pursue. You The Living was born at that moment.

Naked is our most popular song, by far. I wasn’t expecting us to get away with something so poppy AND noisy. I was worried that we’d only be able to get away with one or the other, as the fans of the poppy stuff wouldn’t like how noisy it is, and vice versa. Luckily, I was very, VERY wrong! My proudest moment of my career so far was when I noticed that the crowd was singing along for the first time. I cried! The “how’d we get this high?” line is ironic, but if people like singing it when they’re off their faces on plants, pills, and powders, I’m okay with it – as long as they’re having safe, happy fun.

The title has nothing to do with the “emperor’s new clothes” line, by the way. I was so excited when I wrote the first song for my new project that I ran to show Natasha. She had her earphones in and was ignoring me. She was so engrossed in whatever she was doing that I just couldn’t grab her attention. Eventually, I resorted to stripping naked until she noticed – it worked, and the incident named our first song.

This was going to be the title track before it was cut from the album, but it was re-added when Jake (mixing/mastering engineer) insisted that it’s one of our strongest tracks. It’s now one of our favourites! “Xylocopa” is the scientific name of the carpenter bee, and the lyrics concern the importance of bee conservation; if they go, we go!

The motorik beat and the Peter Hook-esque riff in the verse make it really great fun to play; it’s a nice change of pace from all the funeral dirges. The beat in the pre-chorus is a cheeky nod to Just Like Honey by The Jesus & Mary Chain – it’s one of many Easter eggs that I’ve hidden throughout XXXI. Another one is the solo at the end, which was lifted from a song from my previous band’s first EP; I wanted to reward fans of that project who have followed me to You The Living.

I wanted to create something with a grandiose, Baroque feel to it that would be more at home on the organ than the guitar. In doing so, I ended up finding THE You The Living guitar sound – that orchestral sounding, octave-jumping thing. I’m very proud of the chorus riff, for that reason. It almost sounds like a reggae-infused Toccata and Fugue in D Minor.

Lyrically, it’s about my fear of hospitals, and worrying that every admission would be my last. The nurses would always seem to mock me for my squeamishness and fear of needles when taking blood samples, and I’d become acutely aware of the fact that my life was in the hands of something (the illness) or someone (the hospital staff) else. I just quietly accepted that I may live, or I may die – but I wouldn’t have any control over the situation. The underlying theme of the five stages of acceptance pops up a lot over the course of the album, but it’s particularly obvious here.

The following three tracks (XXXI, Poly, Rituals) form a trilogy, and they were written concurrently. XXXI is about when Natasha and I met, fell in love, and got married over the course of a year between Halloweens. She was disappointed that I’d never written a love song for her, so this song was my gift to her. Naturally, we’re both very fond of it.

It’s the fastest and most aggressive song on the record, and I think it works well when you consider its place in the storyline of the album: I’m recalling the start of my marriage to Natasha, when I was happy, healthy, and full of life. It sounds lively and vigorous, compared to the funeral marches that accompany it. I think it contains my best guitar work, melodies, and songwriting – I wanted it to be perfect.

This is where things took a dark turn in our lives – you can HEAR it. My illness had escalated to intestinal failure and we were told to make plans for my funeral, so I became bitter, angry, depressed, and guilt-ridden. I told Natasha to leave me to die and live the happy, normal life I’d denied her, and I attempted suicide a number of times – but I was too weak to succeed. Completely resigned to death, the album became my “legacy project” – something I’d leave behind.

I haven’t been able to recreate the outro screams – I was in a LOT of pain when I recorded those. That isn’t why we haven’t performed it live yet, though; it’s a difficult one – both technically, and emotionally. One of the concerns I had during the making of this album was – if I were to survive – whether I’d be able to detach myself from the emotions associated with this song, Rituals, and Sleeper when we perform them live. I’m still asking myself that question.

Rituals took a lot of work, but I was determined to perfect it. Eventually, adopting a “less is more” approach (VERY unusual for us) nailed the empty, emotionally drained feeling I was trying to express. The “anti-drop” was well worth the effort, too – I was aiming for something similar to Muse’s Butterflies & Hurricanes, but it wound up becoming this different beast, setting the tense, dramatic tone for Wax. I’m very proud of this track, musically speaking; if this track was instrumental, I’m confident that the listener would still understand what it’s about. That’s my goal with every song I write.

I love it when bands sneak their name into lyrics, so I did exactly that: “this is me, the living end – this is you, the living”. I’m considering doing it on every album; it would be fun to figure out ways to hide it. It’s in The Monster Mash, too – we may have to cover it!

I’m a big fan of Mew’s “…And The Glass-Handed Kites”, where every track blends into the next. I didn’t want the whole album to be one big track, but I wanted to create a bit of theatre. Rituals and Wax are very dramatic tracks, after all. It’s the piano motif from Wax, played over sounds from outside our flat on a cold Autumn night.

The lyrics in the verses are based on a poem on a tombstone that a strange woman my Mum knew in Worksop showed to me to try to scare me out of chewing gum. It really stayed with me, disturbing me right through to adulthood. This girl’s legacy was her death, and that’s how I felt about this album – this song’s about wanting to be remembered, even if it’s for dying horribly and tragically.
It truly sounds like that one last struggle before death tightened its grip on me, and it builds and builds from a whisper to a scream – one last “I’m here! I’m alive!” before the silence – which comes with the next track. Wax is morbid, theatrical, and very loud – which is why it works great as a set closer when we play it live.

When I was at my sickest, I would stay awake in bed, working on the album for as long as I could. Every night, I would listen out for one unique sounding train that would let me know that I could let myself give up on the day and go to sleep – The Caledonian Sleeper. When the pain and suffering grew too much, I planned to wait for a day when I had enough energy to go outside and walk to the bridge, where I would then throw myself in front of the Sleeper – that’s what the song’s about. Happy, eh?
It’s important to me that an album has a great last song – it has to feel final. Appropriately, Sleeper is the complete embodiment of finality – I couldn’t be happier with it as an album closer.
Speaking of all things “final”, there’s a lot of inspiration from Final Fantasy IX on this track: the solo is inspired by the You’re Not Alone theme, the chorus riff is supposed to have a similar ambiance to the Pandemonium theme, and the line “everyone’s grudge” is an ability that the Tonberries have that deals damage to you depending on how many Tonberries you’ve killed. Nobuo Uematsu was my biggest musical inspiration on this record, and I’d love to collaborate with him one day.

The last track – a found sound piece – is all Natasha. I was “killed off” in Sleeper, so this is the sound of the Sleeper passing over me: the first sound in a world without me. It’s macabre, but I wanted to see if I could turn the simple sound of a train into something deeply harrowing. Given the right circumstances, anything can trigger an emotional response in you.