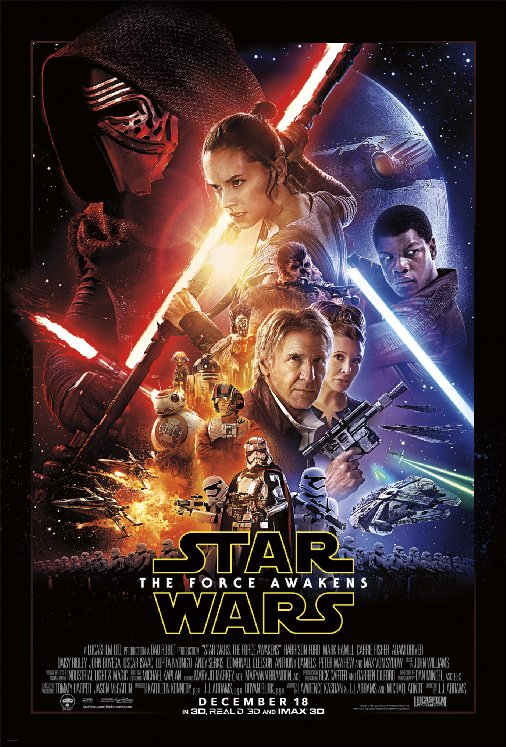 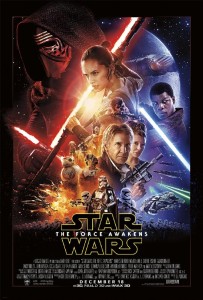 Warning: this review contains spoilers. I figured that anyone likely to be concerned about spoilers has seen The Force Awakens already, and anyone who hasn’t seen it by now probably couldn’t give a flying Ewok about spoilers. Anyway, consider yourself warned.

I was one of the lucky generation who saw Star Wars the first time around. Back in those days, you could sit in the cinema all day and watch the film several times, and my dad and I watched it twice. It was utterly magical, even more so given that, as a 9-year old, I was oblivious to the occasionally wooden acting, the often dreadful dialogue, and the fact that the stormtroopers were incapable of shooting anyone. I’ve since seen it, ooh, at least 15 times, at a conservative estimate.

Quite rightly, The Force Awakens isn’t aimed at my demographic. It panders to us – after all, our money is as good as anyone else’s – but director JJ Abrams’ brief is clearly to reboot the franchise and give a new generation of kids their own 1977 moment. It’s a noble aim, so it’s such a shame that he executes it so crassly.

The plot? A member of the rebellion entrusts the secret plans of an Empire (now called First Order) space station to a cute droid. Said droid ends up in the hands of a young orphan eking out a living on a desert planet. Said orphan, with the assistance of Han Solo, Chewbacca and the Millennium Falcon, takes the droid to rebel HQ so they can use the plans to launch a final assault on the space station. Sounds familiar, huh? There’s even a scene set in a sleazy cantina, complete with alien band, and a villain in a black cape and mask.

So calling this Episode VII, and implying that it continues the story, is downright dishonest. This is a thinly disguised remake, and you can imagine the conversation at Disney HQ:
“JJ, this treatment sounds almost identical to Episode IV.”
“Yeah, I know. But I plan to blow stuff up every couple of minutes so noone will notice”.

Yes, this is the biggest flaw with The Force Awakens. The original Star Wars was released at a time when Hollywood was still in the business of making films for intelligent adults – in fact it was pipped to that year’s Oscar by Woody Allen’s Annie Hall, and the following year’s winner was The Deer Hunter (you could make a strong case for Star Wars marking the rise of the big-budget blockbuster and the infantilisation of the film industry, but that would be like blaming Suede and Pulp for Sterephonics and Toploader). Watching episodes IV-VI now you’re struck by the slow pacing, the lengthy scenes of dialogue, the time taken to develop the characters.

The Force Awakens is aimed very much at modern attention spans, with all that that entails. It’s like listening to a classic 1970s soul tune remixed by David Guetta. Characterisation is non-existent; dialogue is minimal; people, things and planets are noisily blown up every couple of minutes; and the excessive use of CGI makes it look like a cartoon. At one point, the First Order test out their new space station by blowing up four planets, yet unlike the destruction of Alderaan in Episode IV, we’re not told what these planets are or encouraged to have any sympathy for their late inhabitants. It’s just another layer of meaningless sound and fury.

The new characters are straight out of the pop culture handbook. The orphan with a touch of the Force, Rey, is an ass-kicking riot grrrl type aimed squarely at the Hunger Games demographic; Finn is the wisecracking black guy without whom no Hollywood blockbuster is currently complete; and most ridiculously of all, the film’s baddie, Kylo Ren, is a black-clad Vader fanboy who, sans mask, is revealed to be a whining emo kid – it’s never explained how he, or his equally weedy sidekick General Hux (Domnhall Gleeson in a truly woeful bit of miscasting), managed to rise to the top of the First Order ranks.

We nostalgic old Star Wars heads are thrown a few bones in the form of Han & Chewie making a fairly unrealistic intervention, and by the presence of Princess Leia as leader of the rebels (and various subsequent genealogical complications), and a new R2D2-esque droid in the form of BB-8. But otherwise, The Force Awakens is barely recognisable as a Star Wars film, and comes across as a generic 2015 Hollywood action film, and an unremarkable one at that. It’s hard to imagine anyone sitting through it twice in a row, let alone watching it a dozen times. There was a young boy, of about the same age I was when I saw the original, a couple of rows in front of me. When the lights came up at the end, he was fast asleep. There’s your one-sentence review.