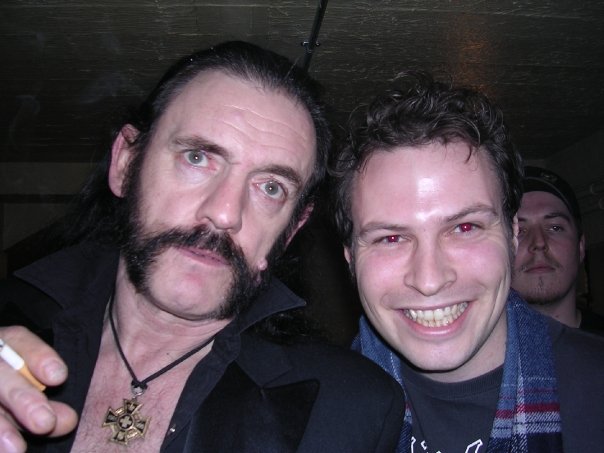 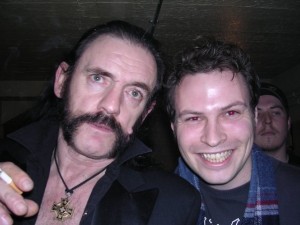 I’ve tried to prepare myself for this for a while now since Lemmy’s health has declined, I tried to think of some perfect eulogy in my head that could sum up what Lemmy meant and how I could possibly react, but largely it has left me dumbfounded and feeling a very real grief that I’ve only ever felt from the death of a relative…

To any true Motörhead fan Lemmy is a relative. For 25 years of my 36 years, Lemmy’s music has been there for me, through good times and bad. How can anyone make sense of a 50 year career and a giant among men, especially when you can’t think straight? I could write a thousand books and not capture how much Motörhead mean to me, so here are some late night off the cuff ramblings instead… I love you Lemmy and I don’t know how or when it will sink in that there will never be another Motörhead record to buy or concert to go to. Lemmy, you were the ultimate; you were rock and roll.

I wasn’t there at the start. In fact I was born in 1979 – the year of the Jimmy Miller produced double whammy of Overkill and Bomber. Even before Motörhead, Lemmy was already a legend, cutting 3 singles and touring hard with The Rockin’ Vicars, working for Jimi Hendrix as a member of his road crew, making a fantastic album in one night with Sam Gopal and appearing on Hawkwind‘s space rock classics Doremi Fasol Latido, Space Ritual, Hall Of The Mountain Grill, Warrior On The Edge of Time and of course singing lead on the band’s classic single and biggest hit Silver Machine.

My friend Frazer’s dad had a cassette copy of Overkill and in 1991 I bought a CD of Orgasmatron along with Judas Priest‘s British Steel from Sam Goody in Woking. I had to get my Dad to come in the shop to vouch for me that I could buy this music at my young age. The shop assistant looked in disgust that my Dad could allow me to buy such disgusting music.

It could have been any Motörhead album but I was drawn toward this one for some reason, maybe it was the big snaggletooth train on the cover, but nothing could have prepared my tiny little mind for the dirty dirty sound that came out of the speakers. I was and have never been the same again. Recorded in 1986 and produced by jazz bassist Bill Laswell at the height of hair metal, it displays the contrary nature of Motörhead, no compromise and never any sell out ever.

I can’t really add to what will be said about the early Fast Eddie Clarke and Philthy Animal Taylor line up except to say that every record they made together was a stone cold classic (Motörhead, Overkill, Bomber, Ace Of Spades, No Sleep Til Hammersmith and Iron Fist) these albums are rock and roll taken to its natural conclusion. Lemmy’s melodic yet aggressive high treble way of playing bass was built from years of being a failed guitarist; you can really hear the basis for Motörhead underneath those Hawkwind records. Combined with Philthy’s double kick drum and ridiculous hi-hat, and Fast Eddie’s hi-end Stratocaster madness, they were a force of nature and punk rock in all but a haircut. Certainly the attitude was entirely the same.

After the early struggles with Larry Wallis and Lucas Fox (which yielded an album On Parole with Philthy overdubbing nearly all the drums and shelved by the label until they hit success and rush released, it’s a great bridge between Hawkwind and the Motorhead sound), they were on a constant upward trajectory until the constant touring and excess meant a studio row about a Wendy O’ Williams collaboration led to Fast Eddie leaving the band after Iron Fist… Ex Thin Lizzy guitarist Brian Robertson joined the band for the adventurous and lead guitar heavy album Another Perfect Day in 1983. Commercially it was a disaster and sales wise the band would never ever recover.

By the time I was into Motörhead, 1916 was the current album and considered a creative high point for the band. Lemmy, Philthy, Wurzel and Phil Campbell were like superheroes to me so it was a shock that by the time of March Or Die, Philthy was relieved of his drum stool and had got himself in such a state that he was ‘trying to climb through the dressing room mirror’. It was at this point that Mikkey Dee joined the band and although he arrived too late to play most of the drums on the album, he really made his presence felt on Bastards, one of the finest Motörhead albums, released on a German dance music label ZYX and arguably the hardest album since Overkill. In fact I remember Lemmy remarking that “Burner makes Overkill sound like a ballad”…

It’s typical Motörhead that one of their greatest records was also one of the hardest to find in shops… I remember having to order it in from my local record shop Rainbow Records and enjoyed having to say Bastards down the phone to Woolworths. I rang round several of the local record shops not just to annoy them but I felt it was my civic duty to alert people that Motörhead had a new album out because press coverage seemed fairly minimal. Other than a great interview with Wurzel on Krusher’s Noisy Mothers couch at 3am… Being a Motörhead fan was hard in this era, but it made you connect even more with the band, a commercial nadir, combined with a creative high benchmark that continued for the rest of their days.

The next album Sacrifice arrived in 1995 and I remember the 5K review in Kerrang! I also remember with sadness that Wurzel had made a decision he would apparently regret for years after… He left the band and brought them back into the three piece line up that they would remain forever after. It was another hard album and also the first Motörhead tour that I attended; I remember a punk swinging his crutches about in the mosh pit and as Lemmy sauntered onto the stage a lit cigarette hit him. He said ‘Don’t throw fags at me. We are Motörhead and we are going to kick your arse” and with that the audience turned into a washing machine, half of the time I wasn’t even facing the stage but I left with my first ringing Motörheadache of many…  The power was like no other, it was pure wind coming from the speakers, you cannot explain the awesome power of Motörhead at full tilt.

The three man line up of Lemmy, Phil Campbell and Mikkey Dee carried on, delivering the most consistently brilliant set of latter career albums achieved by any band. Period, I think. Overnight Sensation, Snake Bite Love, We Are Motörhead, Hammered, Inferno, Kiss Of Death, Motorizer, The World Is Yours, Aftershock and Bad Magic. It was in this later period that I think Lemmy really did peak as a lyricist, expanding on his fantastic historical knowledge, tackling religion, war and even politics with razor sharp wit and often great humour. It’s not always acknowledged that he was a writer of surprising sensitivity and depth especially when he tackled songs of love, alienation and even his own mortality. I believe Lemmy is one of the great British poets and I know that time will see him as one. Also vocally he began to experiment with vocal harmonies in those later albums and really did capture a vulnerability and melodic sensibility rarely seen in such loud aggressive music.

Lemmy was the perpetual underdog; Motörhead often existed in chaos, Lemmy was not a businessman, he was too honest for that. I know he did think a lot of Todd Singerman who did a great job of managing the band since 1992 and it was a pleasure to watch the band rise and rise as a live attraction and to see Lemmy gain more and more presence, even garnering some respect from the mainstream media.

One of my favourite Lemmy lyrics is ‘ambition makes us whores’ and I always remember him saying ‘good business is theft’. Lemmy was an artist; he was a pure man with no agenda. Many choose to remember him as a hedonist and he was those things but he was also a man of principles who dedicated his life to rock and roll. Lemmy was also an old school gentleman of my parents era, despite the debauchery he was surrounded by – and creating – he always had a debonair aura and always conducted himself with dignity over a variety of subjects. There are so many great Lemmy quotes. When Joey Ramone died Lemmy said ‘he understood rock and roll’.

Seeing Lemmy look so frail recently was very hard and particularly the Hyde Park show with Black Sabbath, where he looked to be struggling, was emotional for the wrong reasons, but thankfully the last time was at Wembley Arena when he delivered a very strong performance. It will never be enough; everyone wanted him to go on forever.  My thoughts go out to Mikkey and Phil and all of the Motörhead family. Of course we must also remember Lemmy’s dearly departed brothers Wurzel and Philty Animal Taylor.  I can never thank you enough Lemmy. A job well done. x.

Built For Speed
You know the rules, you all know the game
Try and do what’s right
And I swear I can’t complain
If I die tonight
But I don’t think it’s in the stars
For me to go that way
I’ll be here for a long, long time babe
I’m here to stay
[Chorus]
I was born to rock’n’roll, everything I need
I was born with the hammer down
I was built for speed.
Bet your life it ain’t no easy money
But you won’t hear me bitch
Spent a long time wrecked and funny
I’ve got the ten year itch
See me running all around the world
Trying to make some time
A million miles, a million girls
A million real good times
[Chrous]
Don’t you listen to a single word
Against rock’n’roll
The new religion, the electric church
The only way to go
I don’t give a good goddam
My life’s been alright
I’m going crazy out of my mind
Every single night.