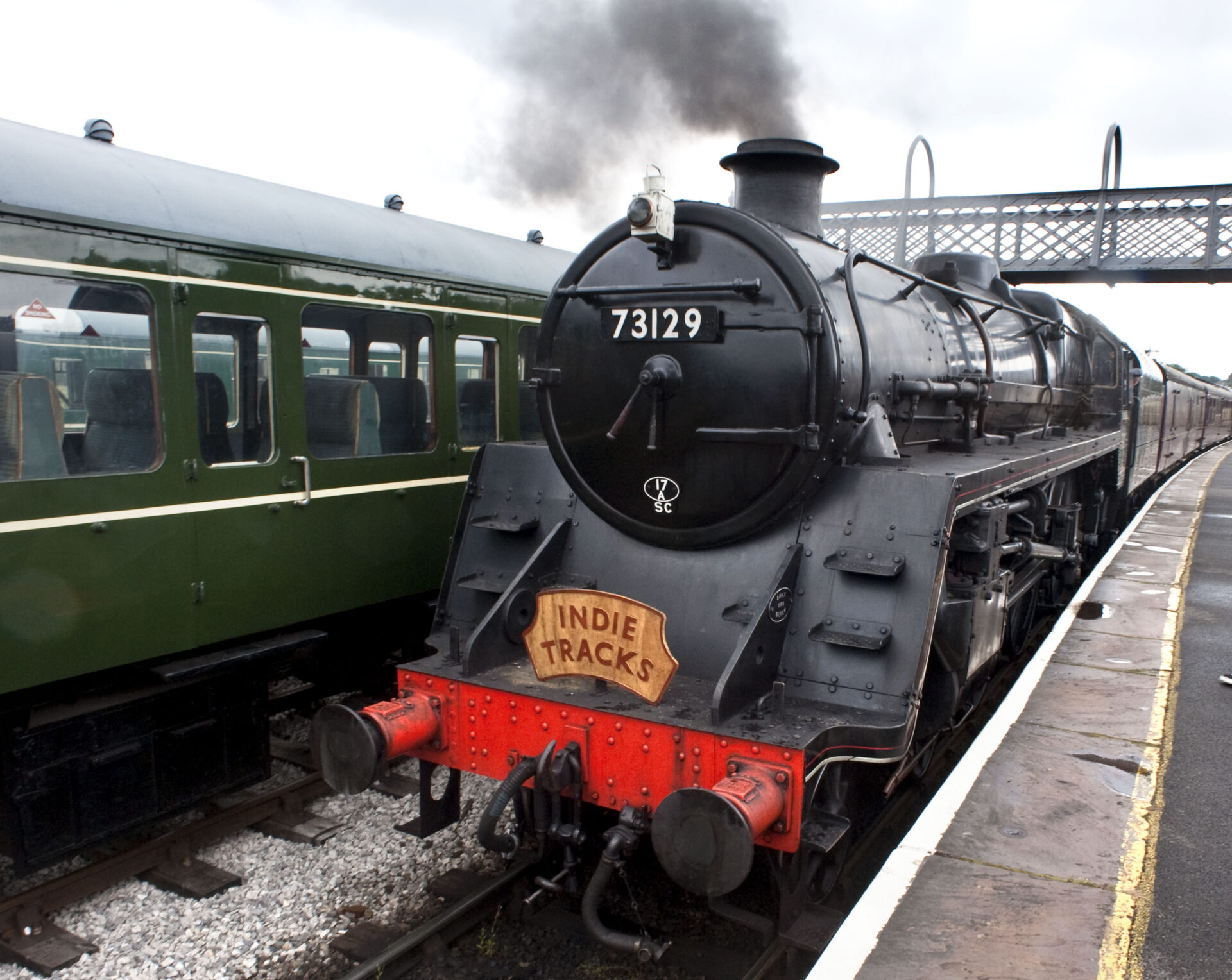 It’s been a decade since Indietracks arrived on the UK festival scene and at The Midland Railway in Derbyshire it was full steam ahead as indie kids descended for the weekend of anniversary celebrations.  To commemorate this important occasion, a 30-minute film about the festival and railway site was played out on the church stage.  Containing some amusingly stilted comments on the music from the railway workers, the film also highlighted the freedom Indietracks enjoys, owing to its independence from big sponsors.  Thus, the eclectic line up of indie sensations was brought together in the same slapdash, DIY manner that the genre itself is modelled on.

On Friday things kicked off on the outdoor stage with Simon Love and The Old Romantics and The Spook School.  Whilst Love’s somewhat ill-advised all-white outfit and quiet crooning didn’t seem to stir the crowd, The Spook School ended things in a rousing fashion.  The Edinburgh foursome can certainly churn out a toe-tapper and songs like ‘Burn Masculinity’ seemed to get at the central unifying theme of the festival: everyone is welcome in all their glory.  As for their drummer Niall, he turned into a proper Indietracks legend, seen throughout the weekend clad in Jack Sparrow-esque garb and hosting a Saturday afternoon “Life Coaching 2.0” session.

Each night after midnight, campers headed back to the upmarket sticks of the Golden Valley campsite where a disco played out into the wee hours.  This gave the charming feel of being out on a rebellious school trip, with revellers watching the sunrise amidst playground accessories and luxury family camping facilities.  Indeed, the possibility of being able to have a hot shower each hungover morning before heading back to the Railway Centre was a definite perk and certainly made paying a separate camping cost seem worth it.

Sustained by the vegan delights of Manchester’s Teatime Collective, we enjoyed the midday Saturday sun on the grassy slopes of the main arena before heading off towards the quaint church stage to see Chrissy Barnacle and Songs for Walter.  Chrissy is a Glaswegian singer who spins a great yarn between fantastical crooning.  Her debut EP Hazelnuts describes her difficult time with love and relationships surrounding an ethereal hazelnut eating experience in a friend’s car!  A great raconteur, she had her audience hushed during her songs and in fits of giggles as she told them of the spectre of Tina Turner was advising her “what’s love got to do, got to do with it?”  On a rather more earnest note, Songs of Walter’s Laurie Hulme told musical stories about his grandfather Walter.  The creation of a distinct memory in place and time was strongly felt with each song that passed.  His set served as a beautiful homage to a loved relative, amidst other great eulogies for the likes of Nick Drake.

Owls were definitely another special feature.  Birds of prey sat perched on the bar of the indoor stage, to be stroked by ornitho-enthusiasts waiting for real ale ahead of The Lovely Eggs.  Hardcore fans held up their ‘Fuck It’ football scarves.  Whilst their twee subject matter might be an acquired taste, it was clear that the band gave an empowering sense of can-do to audience members and younger bands alike.

When the evening chill grew, many opted to shelter from the outdoors on the Booze Train.  This provided a refreshingly stationary way to sit down on padded seats whilst enjoying a tinny.  Not to mention an excellent viewpoint to observe the eponymous can crusher.  Who knew using Victorian machinery to aid recycling could be such an inexplicably exciting sight to behold?

More regression ensued on Saturday during Saint Etienne’s giant-balloon filled performance.  Pumping out classic 1990’s hits like ‘Join Our Club’ and ‘Only Love Will Break Your Heart,’ it was clear that 20 years on Sarah Cracknell’s voice still packed a punch.

A sunny Sunday dawned.  The day contained a few musical clashes to contend with.  Trust Fund and Haiku Salut forced die-hards to sacrifice half of one for the other.  Whilst the electronic musings of Haiku were an interesting foray into something quite different, Trust Fund’s frontman seemed to endear the masses with his vulnerable smile.  As his voice cracked through tunes, such as ‘Seems Unfair,’ he may as well have been wearing a big sign saying ‘in need of hugs’ for the cooing reaction he got.

Back outside, Darren Hayman performed a more self-assured set of folkish melodies.  With 16 studio albums and counting, his latest selection of songs kept with his usual thought-provoking subject matter by telling the story of “thankful villages” where every soldier returned alive from the First World War.

Stepping back in time again to another set of old favourites from the 90’s, White Town were aboard the steam train stage on Sunday afternoon.  With a capacity of only around 20 people, this stage was reserved for lesser-known emerging artists.  Having White Town perform their set there proved a little frustrating as a train full of people showed up and only a handful were able to get into the first carriage to see the band.  Despite this, sitting elsewhere with the dim hum of ‘Your Woman’ playing through the smoke and moving views had a very special ambience.

San Franciscan group The Aislers Set rounded off the weekend in equally memorable fashion.  With Indietracks being hailed as their only UK gig of the year, it felt a real privilege to bear witness to their lucid sounds washing over the Butterley Farm landscape. The six piece seamlessly went from the bluesy songs, such as ‘Mission Bells’ from their 2002 album How I Learned to Write Backwards, to the soulful rendition of ‘Mary’s Song’ that had everyone glued to the spot.  An exceptional headliner, it was touching to see how much it meant to the band to be a part of Indietracks.

It is rare to find a festival where fans are so devoted both to the bands and the event as a whole.  This makes for a different sort of atmosphere that’s at once intensely appreciative and more relaxed.  As one festivalgoer commented: “I can come here one year and spend pretty much all weekend in the booze train, and another year I go and see every band playing.”  This melting of approaches and experiences is definitely something contagious.  No wonder Indietracks has been able to pull in more devotees with each passing year.  Long may it continue!