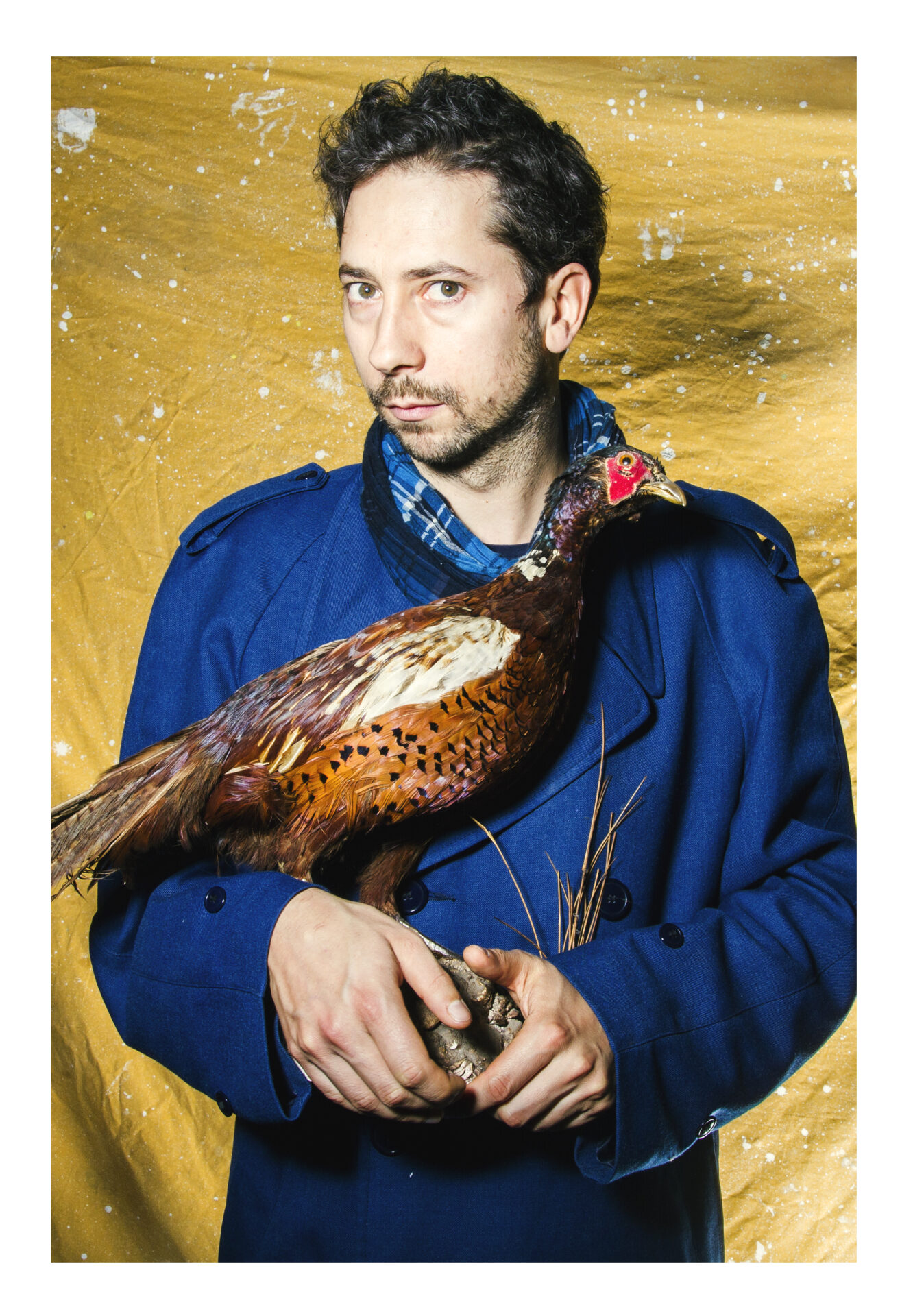 Berlin based, Belgian electronica artist Manu Louis releases his debut album ‘Kermesse Machine’ this month.A multicultural bricolage of found sounds, gleeful instrumentation and creative vocal samples:stitching together his influences of pop, classical, experimental music and jazz. Watch his new video for the track ‘My Life is Riding to Strike’ below.

To celebrate the release we asked him to write about his ten favourite albums. So that we could get under the skin a little of some of the musical influences that inform this most eclectic of artists.

“A couple of years ago,
I started to consider that old music wasn’t influencing me in a good way.

Duchamp said about his ready-mades that they had to be recent because the danger with ready-mades, after a few years, was that the eye got used to the object and start to find it acceptable and beautiful.

I think the same thing also applies to music. What was originally a fragility with enough time may turn into a special charm with which no recent work can compete. Vintage isn’t a good thing, not only because it makes all the old things look better than the new ones – a bad picture from the thirties will often have more charm than a good contemporary work, it’s also that your ears aren’t ready for the new sounds if you live too much in the past.

With that discovery, I decided 5 years ago that 90% of the time I would listen to music that is less than 2 years old and not to look back too much (I just allow myself 10% for consulting the masters from time to time).

I decided to organise my favourite top ten albums into two categories based on what I remember (I haven’t played back any of these albums before writing this):

1. Important memories – the older stuff that I think has been highly influential.
2. Recent memories – those I remember as my favourite recent albums

I bought it with my parents at a flea market when I was 9 years old. It was my first ever Cd. I’ve probably listened to it hundreds of times and I’m sure when I write stuff now a bit of this music wants to get into the songs I’m writing
An amazingly eclectic album (as everything I was about to do later), it certainly turned me more into someone who listens to music and started to give me the desire the play myself.

I love this piece, but it could have been any other Feldman album or composition.

I have the impression that more people today listen to Feldman’s albums rather than to Stockhausen or Xenakis, this is because it’s great music on record. It’s played very quietly, without many dynamics, so you can play it loud, and it’s full of space for the listener to do other things while they’re listening.
It could also be a good example of how to make a good pop album. My friend Sylvain Chauveau tried to mix this kind of music with pop songs and I think he succeed in making the kind of album you want to hear often.

It could be Mingus in general rather than this album, but it’s certainly a good example of the stuff I like in his music: the joy and humour in the band, the playing and the compositions, it’s literally saturated with enthusiasm. He is also a very lyrical composer and I like his orchestrations too.

It’s highly important for me to go back to jazz regularly and to remember that special spirit, in particular the mixture of spontaneity and organisation.
Also, it’s played by a big band, plus two guitar players, which is pretty unusual.

Sorry to repeat myself again, it could have been any other Wyatt album (I have never heard a bad one).

Wyatt is absolutely brilliant, weirdly original, and with a different sound on every album. Like with Feldman, the dynamics don’t change much and it’s full of space which, as I said before, makes this music work great on record.

But I think the great thing about Wyatt could come from what he hasn’t done.
Being from that seventies generation, and as weird and inventive as he was, he could have made what most of his colleagues of that time did: hundreds of releases that would feature hours of jam sessions, Rock Operas, Requiems, Jazz albums, Symphonic Gothic, etc… But he never did.

He always stuck to the old fashioned tradition of making songs and it looks like he didn’t have to prove to himself that he was a composer.

One day, with him, I realised that using the traditional structure of a song, rather than inventing everything, (as Wagner) can sometimes make the work deeper.

In a metaphorical, but also really concrete way, renouncing to create a part of the work, and use instead traditional structures brings into the piece the voices of the past civilisation. It’s not anymore the work of a single genius that we hear but the humble contribution of a person (as weird as he is) to the traditions of the past.

As a lot of jazz may have proved too, when the soloist is singular and talented, this particular combination of originality and tradition, of collective invention and individual genius may bring the work to a deeper level.

I’m a child of postmodernism, I grew up with no respect at all for traditions, I always believed in individual invention as the only valid thing on Earth, but as much as I love XXth century classical music, I always felt that somehow jazz succeeded in being a deeper music and maybe the reason could be this one, the collective part of the work mixed with innovation.

Zappa is of course an incredibly creative and unique voice in rock and any other style, but he was also a great business man and managed to find an audience for a music that should have never had one.

I think the craziest and most unusual thing he did was his commercial success.

A group from Brussels led by Carl Roossens. It’s poetry/slam mixed with bricolage and fantastic lyrics, brilliant songs and excellent visuals. Most of the group members have limited musical knowledge, but they all are solid comic artists, with a very advanced vision of art.

When I discovered them, I belonged to the world of highly trained musicians (such as jazz, classical, contemporary music); it was really a shock for me to hear people developing such an elaborate and original music with so little technique involved. They used all the ideas about art that they had developed in their comics, in their music. That doesn’t replace ability stemming from practicing an instrument, but it can bring to the table fresh and new ideas that a musician would never think of.
That turned me onto electronic/bricolage music.

Philippe is now a very well-known French songwriter. He has this unique way of mixing intelligence and great dumbness at the same time.

I always perceived it as a natural auto-sabotage turned into grace.

He writes extremely beautiful songs that could be related to conceptual art in a very uncommon way.

A fantastic discovery, amazing songs with very simple production (just acoustic guitar with an amp and voice).
The thing that shocked me most was the length of the songs. They are very, very long – 6-12 minutes, but they never seem long, just normal sized. They don’t have long introductions or repetitive tricks, the songs are similar to those of Wyatt or Katerine, but just 3, 4 or 5 times longer. I have no idea how he does that.

The second thing I found brilliant is this fresh and new type of avant-garde/noise/free improv mixed with songs. When I first listened to it I had the impression he succeeded where maybe Chadbourn had only half-succeeded in the past. With Chadbourn, you would always hear him switching from one tradition to another, while Dawson seems to always to play one thing.

I hope to meet him someday.

This album is a compilation of extracts from various works by the American composer.

Almost any of those tracks could be the beginning of a new music trend (related to Sound art and Contemporary music).
It features Pittura fresca, where in the middle of a free improvisation he starts to play a recording of Mozart’s requiem (playing a recording of classical music in the context of a contemporary music piece is something I’ve never heard before).

It also features pieces for live ship horns, chorus and shofar (an ancient musical horn made of ram’s horn).

Even though Momus has been active for more than 30 years, I only discovered him 3 years ago. This album is a 3 CD ‘best of’ and was released last year. I think there are songs from every album he made (about 30) on it.

Momus is an absolute virtuoso songwriter. He is the Picasso of Pop and can do any type of song someone else has done and he would make it better (a better Gainsbourg, Bowie, Kurt Weil, Léonard Cohen, Beck…).

This triple album sounds a bit like a revue (because it’s a ‘best of’) but I think his albums generally sound like that too. We travel in different moods in general, but it’s funny, touching, really smart, impressively creative, always with great lyrics and vocals.”