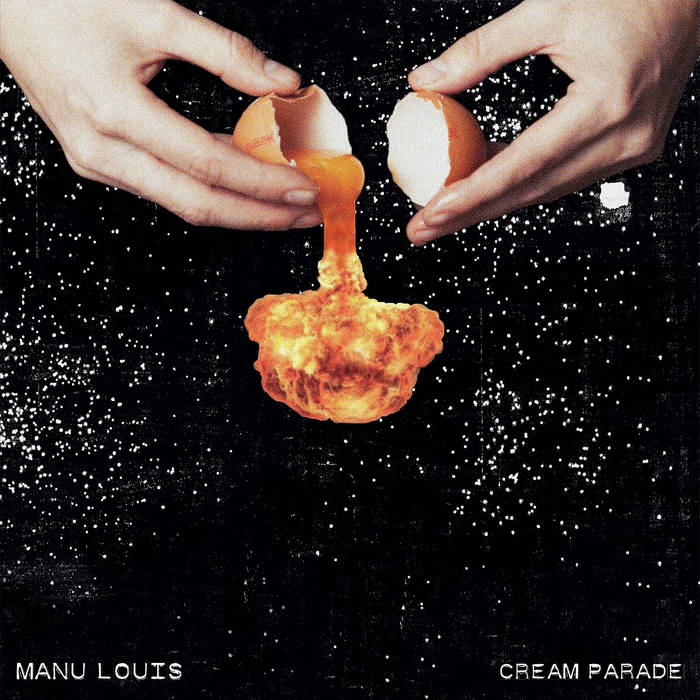 The follow up to Manu Louis’ 2017 debut Kermesse Machine, Cream Parade begins – a little unexpectedly – like the soundtrack of a David Lynch production; a synthetic vibraphone and a brushed snare taking a back seat to virtuoso Greg Tirtiaux’s saxophone bravado. What happens in track two is something else entirely and much more in line with Louis’ frisky, electro-eclecticism. ‘Internet‘ pulses and wobbles with 80s synth flair, only to drop back immediately to a spare rhythm of clicks and pops; not the vinyl kind of course, but something with more traction, and inherently anti-analogue. Louis doesn’t sing on this track as much as speak the lines that will remain a mystery unless you’re fluent in French. Except for the chorus; it seems the ‘internet’ sounds the same in French.

Louis’ selective sound palette means that what could’ve been a disparate collision of cocktail jazz and absurdist electro funk, makes terrific sense thematically across the record, even if you don’t hear it at first. With Adi Gelbart on the electronic church organ and with beats by Brazilian percussionist Nylo Canella, it’s no wonder Louis’ brilliant if eccentric vision comes into such sharp and playful focus on Cream Parade.

While Louis excels at maximalist electro fun, he also has the restrain and confidence to strip it back. A duet with British singer Heidi Heidelberg, ‘Data Farm‘ shows a different kind of musical style coming through, something akin to an avant-garde power ballad with Tirtiaux’s horn lending some extra sass.

“Our current geo-political situation feels very formless and unstable” says Louis “the Cream Parade title is reflective of this fluid and hyper sensitive globalised social environment”. Louis tackles the social and political currents that run through this release with spirited satire, much like Zappa did back in the 80s, which is to say that the super-funky sounds veil existential observations. Manu Louis will be touring the UK in September 2019 at variety of festival and art spaces, it’s probably best you go check him out.

Cream Parade has been available since July on Igloo Records.