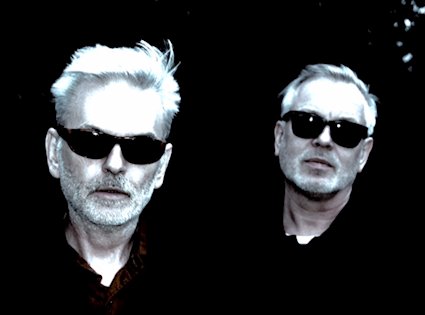 ‘Magical Thinking‘ is the forthcoming EP from Liverpool-based The Room in the Wood and we have the premiere airing of the release, stream it below. Comprised of Paul Cavanagh and Dave Jackson, the duo shall release their debut EP digitally on April 20, followed by an 11-track album, to be released later this spring on vinyl, CD and digitally.

This is the first time Paul Cavanagh and Dave Jackson have worked together since their post-punk band The Room split back in 1985. Reunited under the moniker The Room in the Wood, this past year has seen them write over 30 new songs. Together with collaborator and ace drummer Colin George Lamont, they’ve developed and honed these ideas down to 14 tracks with three included on the ‘Magical Thinking’ EP. and the remaining 11 appearing on the coming LP.

This batch of songs combine Jackson’s lyrical storytelling with Cavanagh’s guitar-stylings and make for a diverse collection that blends post-punk pop, gritty blues-folk, and velvety ballads, variously influenced by Russian fairy tales, Francis Bacon, dead oceans, swimming pool bridges and unanswered prayers. This is eerie space-folk meets bluesy-glam-punk – an eclectic mix of styles, prioritising melodic storytelling and lots of strum and twang. The lead track ‘Magical Thinking’ was influenced by The Fall, the post-punk sensibility of their 80s roots, and the desert blues of Tinariwen & Songhoy Blues. With delta blues riffs and a style that burrows deep into the subconsciousness like Iggy’s ‘Passenger’, it’s a insidious cut:

“Magical Thinking is a bit of a tongue in cheek rant about the weird stuff people believe in to get them through their days. Though the lyrics might come from a ‘spiritually unaffiliated’ standpoint, I wonder where we would all be without our collective storytelling abilities, dream logic, mass hallucinations and dogged determination to make 2 plus 2 add up to 5,” says Dave Jackson.

Dave Jackson has been writting and recording since his teens in bands such as 051, The Room, Benny Profane, Dust, Dead Cowboys, under his own name with former Shack guitarist John Head, and as Dave Jackson & The Cathedral Mountaineers. He has recorded and released 10 albums with these various incarnations and, during the eighties, notched up seven John Peel sessions with The Room and Benny Profane, in addition to appearing on the Whistle Test, Janice Long and Saturday Live.

The Room in The Wood ‘Magical Thinking’ will be available exclusively as a digital download as of April 20. It can already be pre-ordered via the label’s Bandcamp.

0 thoughts on “EXCLUSIVE: The Room in the Wood – ‘Magical Thinking’ EP”