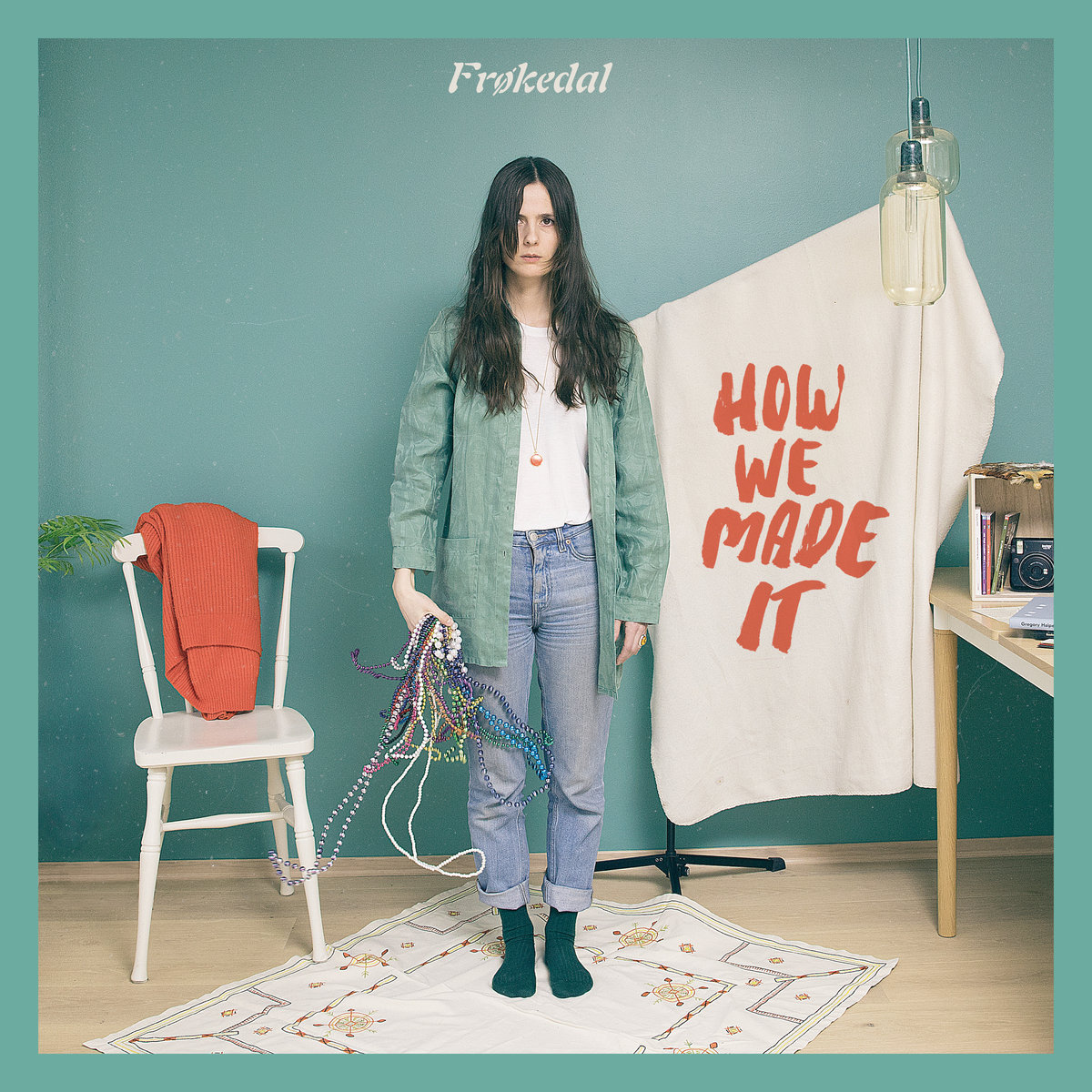 Anne Lise Frøkedal is Norway’s answer to Joni Mitchell, or so they say. Something of a perfectionist – she’s reputed to have made 20 versions of the track list for this album alone before settling on its final format – she shares some of Mitchell’s traits; writing and singing about social and political topics as well her as own situation. Whether she will achieve such greatness only time will tell, but she’ll have a shot at it, for sure.

Having spent time crafting her trade with other bands, Frøkedal’s 2016 highly praised debut album ‘Hold on Dreamer’ was essentially a minimalist acoustic one despite the presence of her trademark gold coloured Telecaster. Watching her perform it in the UK it was clear she could easily evoke the likes of top quality performers such as Kate Bush and her compatriot Susanne Sundfør, while the odd juxtaposition of her own smouldering voice and wistful lyrics and delivery identify her as a character in her own right.

Her Familien (“the Family”) of five musicians figure highly again on this album. They are very much in evidence with their collection of sometimes arcane instruments, which include a miniature Greek bouzouki and they deliver a more extroverted sound this time. One of the Family incidentally is Thea Glenton Raknes, (Thea and the Wild) whose own second album, ‘Ikaros’ was reviewed in GIITTV back in January. Norway is that sort of place. Frøkedal, despite her own album being scheduled for release in a couple of weeks, just turned up at the Øya Festival in Oslo playing keys and guitar for Tønes.

This album was inspired by Frøkedal’s more “immature” personal traits as she describes them; impulsive thoughts and actions fuelled by everything from fear, love and deep passion to blazing anger, and most of those emotions appear in the very first song, the 1960s-ish ‘I Don’t Care’. The song concerns the idea of firmly closing the door to the past, of moving forward in a positive manner, in spite of the naysayers. If Millwall FC fans are looking for a theme song, they’ve found it.

It is perhaps suggestive of this new, more aggressive Frøkedal that she blithely includes the line “Do you worry any minute I might become the c**t that you say I am?” on that opening break-up song, as if she’s challenging the world to be shocked by someone who, if you chat to her, comes across as a woman in whose mouth butter wouldn’t melt. (If you think about it that line is quite a complex piece of grammar too, for a non-native English speaker).

‘Cracks’, released last year as a single, is a lovely little song in a similar vein; a more traditional folk song that sees Frøkedal revisit her Joni Mitchell persona – with the aid of an intricate piece of guitar work and a bridge that seems to feature both an accordion and harmonium. There is also a Cajun Triangle in it, a pretty cool-sounding instrument which resembles the plant pot holder hanging off my outside wall, and that perhaps recognises Frøkedal’s reputation in the universe of cool. “Can you see the cracks in me”? she asks. Well actually, no.

Another 2017 single was third track ‘Stranger’ which, according to Anne Lise “contains traces of the west coast of Norway” as she “leaves this fjord behind”. There is plenty of finger-picked electric guitar along with Familien’s own fingers and voices and a strong melody line and harmonies. It is on this track that you really notice the greater degree of instrumentation compared to ‘Hold on Dreamer’, which sounds patently minimalistic in comparison.

‘Stranger’ was written from the perspective of a young person, leaving behind their childhood and stepping out into the unknown. It is an adventurous song, and looks upon the future positively, but in a sense of leaving behind all you know in hope of what’s around the corner or over the next hill. It looks back on that urge to leave with nostalgia; how being a young dreamer is both a beautiful and naive thing. Millennials take note.

‘Hybel’ is Norwegian for bedsit or studio apartment, or just a living room. The track opens with the sort of old-fashioned organ that conjures up an image of Reginald Dixon on the Blackpool Tower Wurlitzer or dances at 1950s holiday camps; things Frøkedal could have no concept of. It creates an atmosphere in which the sparse lyrics, if I’ve read them correctly, obliquely detail a sort of violent Cathy Come Home or Up the Junction hand-to-mouth existence.

“Oh, the moment I call a flight/ I only wanted to be true/ Falling over I realise/ There’s no way of escaping you”

When the organ – and synths – return, for the final 3 ½ minutes, it builds into an unanticipated prog-like anthem. If she can find venues with pipe organs for her tour this could be something special.

‘Paper Tiger’ appears to identify someone, who, as the title suggests, is not what they seem to be, both good and bad. “Paper tiger, I know your face/ And I know it’s hard to trace/ The lack of kindness in your care/ And the weakness in your stare”. Then, “Everybody wants to know the way you are”. The melody is less dramatic than the lyrics suggest and it is a pleasantly soporific piece.

It would be nice to think that Anne Lise had written the upbeat ‘David’ for me, given the amount of words I’ve penned about her in the last couple of years. In reality it’s a paean to love and hope, the whereabouts of which she finds it hard to identify – “Loving who keeps knocking on your door / Where do you think he lives? / Upstairs, in the street, by the window?” Reminders of her compatriot Ingrid Helene Håvik’s “Lover, where do you live? In the sky, in the clouds, in the ocean”.

Being out of booked studio recording time the track was recorded in several places around Oslo courtesy of various colleagues from her Familien band and her previous one, Harrys gym, and her own sister, who provided the bass. Even then it almost did not make the cut but it suddenly dawned on her that “I missed its hopeful optimism in between the other songs. I needed ‘David’ to shine a little light on the album.”

‘Spinners’ is a short instrumental track with shades of a vocal-less Gaelic lament, while in the title track the acerbic, almost brazen lyricism returns. “There’s vomit in my face and in my hair” she sings, probably not actually about herself. Rather, this song appears to be a metaphor for how she and the Family have battled their way to where they are now: “that’s how we played it, that’s ‘How we made it’”.

When I saw Frøkedal in Manchester in April 2016 in a pub venue that had been taken over by a flamenco-dancing hen party possessing the territorial ambitions of a Panzer Division, one of the Weatherfield ladies advised her, in the loudest voice you ever heard this side of t’Rovers Return bar to “believe in yerself”. (I recall she added “our kid” to emphasise her Manc-ness). ‘Believe’ could be Anne Lise’s riposte to that redundant counselling.

The most tuneful track on the album, with a great hook in the chorus, it is a throwback to the style of ‘Hold on Dreamer’ and concerns “different ages or stages in our lives when our vision gets a little blurred”, which was almost certainly the case with the flamenco dancer, who’d already been there all afternoon. A great song which I’d be pushing hard as a single if it was any of my business.

Cracks in her personality seem to figure highly in the album and they return in ‘Walls’, a slower, painful break-up song. “Don’t know  how  long  it  takes/  for  the  water  to  run  through/ all  these  cracks/ and  clean  out  our  mistakes”.

The penultimate track, ‘Treehouse’, deviates considerably from her usual style, venturing into the fairy-tale territory associated more with her compatriot Aurora or Iceland’s Of Monsters and Men. The lyric concerns a mischievous plot to tear down a tree-topped kingdom and was inspired by a six-year old child who tore his older brother’s tree house to pieces through boredom without knowing he was being watched, though I’m sure he didn’t say “Fuck you all”, which is the opening line.

She says “Even if it seems meaningless and silly, the joyful mischief of it feels strangely familiar. This idea or this way of behaving kind of translates to everyone at some point. Sometimes it just feels better to tear stuff up. Or maybe, tearing stuff down for others feels better than building up your own.”

While it conveys a serious message about vengeance the clever little tune, especially the delightful chorus, is one that might be used in a Toy Story prequel.

The album concludes with ‘You don’t have to’, a more melancholic piece, opened by a groaning harmonium, but one that doesn’t lose any of its melody as a result. One benefit of having a lyric sheet available (I hope one comes with the album or is published online) is that you can quickly appreciate how the lyrics could stand as a poem, without any music at all. They are partly written in iambic pentameters to start with.

Poetry and lyrics are different things. Several artists, I’m thinking especially of the wonderful Swedish one Åsa Larsson, aka Resmiranda, specialise in writing music to other peoples’ poetry, a great skill, and it is almost as if Frøkedal has musicalised her own poetry here.

Frøkedal is a perfectionist who also displays contradictory tendencies; her passionate vocals contrasting with deeply contemplative lyrics. She is quick to appreciate her own failings, but not to force them on to you.

Joni Mitchell once said “I see music as fluid architecture” and perhaps that’s one way to view Frøkedal, as someone who is capable of designing and constructing songs that wind their way from the hills of contemplation through the valley of inspiration to the bay of revelation.

A full European tour is envisaged to coincide with the release but for the moment only Norwegian dates are known.