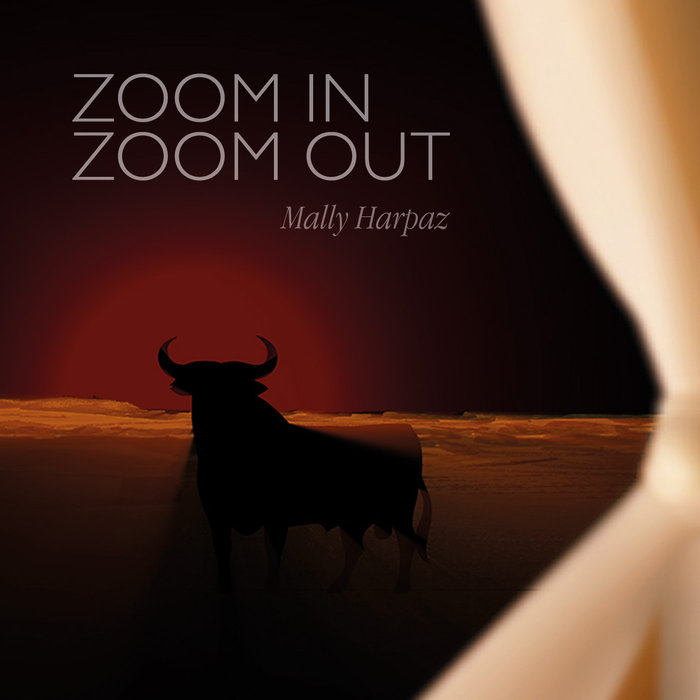 Mally Harpaz, now there’s a name to conjure with. Where have I heard that before, you’re wondering? Harpaz is one of the genuine unsung heroes of the music business, having provided much of the musical backing for Anna Calvi’s three albums and live performances – which takes some doing – for the best part of a decade. She’s a multi-instrumentalist who plays piano, harmonium, drums, various other percussion, guitar, hammered dulcimer, vibraphone, marimba, synths and bass pedals, and often more than one at once.

Indeed it’s accepted in the Calvi camp that if Anna asks Mally to learn and play a new instrument she will do just that, and pronto.

But there’s more to her even than that. Starting life as a drummer in the oddly named Lunatic Crash, with long time collaborator Eran Karniel, she has worked with, inter alia, James Marples (aka Colonial Sun), Ciara Clifford, the video artist ClaRa ApaRicio Yoldi, and the Californian Hazel Iris, to whose ‘Nine Sisters’ debut album she contributed last year, as well as running the art collective Blind Dog Studio (yes, she really has one) in North London.

With all this accumulated experience it was only a matter of time before she put together a collection of her own work. The only real question was what form it would take.

In the opening tracks (there are 10 but one is a reprise and another a live version of a previous recorded track), the emphasis is on textured composition (a phrase I made up) rather than on fully-formed songs and while I doubt it was in her mind, there are surely opportunities for bits to be used for film and TV synching.

That is evident immediately on Track 1, ‘Voices’, where the opening bars are similar to those of ELP’s ‘Just Take a Pebble’ and that will do nicely for me. Voices are provided by Karniel and by Anna Calvi, who offers vocals or guitar on four tracks in all. The building tension is provided by monastical voices and a repeating piano riff supported by vibraphone that collectively might equally underscore a Dan Brown film or be the theme tune to ‘Bay’, ITV’s answer to ‘Broadchurch’, except that series is so poor I’m sorry I even made the suggestion. You have to listen to it a couple of times to appreciate the intricacies of a piece in which Harpaz plays all the eight instruments apart from guitar, herself.

Track 2, ‘Zoom Out’, has Karniel and Hazel Iris providing the unearthly vocals. It’s an extension of the opening track in style with a chamber music feel to it and enlivened by the simple but effective guitar contribution of Iain Ross.

‘ Zoom In’  carries on in a similar vein but it’s a more complex composition with strings (violin/cello), and a musical saw, an unusual instrument but one which adds atmosphere to any piece in a similar manner to that of a theremin. There’s also that tiny glockenspiel that Mally Harpaz used, I think on Calvi’s ‘Blackout’. Speaking of whom, Anna Calvi is credited with a guitar part but I struggled to hear it at all, which is unusual for that lady. The song is reprised on Track 7, as a live recording with additional vocals by Hazel Iris and is possibly slightly the better for it.

The eerie fourth track, ‘Phone Call Away’, takes the album off in a different direction with a vocal contribution written and performed by James Marples with whom Mally Harpaz launches this album together with his EP on 5th April. Marples has a deep bass voice and makes a similar impact to that of Wild Beasts’ Tom Fleming on Emmy the Great’s ‘Swimming Pool’ with Hazel Iris filling the Emmy role– it fits the music perfectly and has an operatic quality about it. I see future collaborations here?  The lyrics have similar sentiments to Peter Gabriel’s ‘Come talk to me’.

Track 5 – ‘Not without Pain’ – opens with a spoken voice part from Mally Harpaz as she plays the instrument she is probably best-known for, the harmonium (she has a hand-pumped Indian one), which bonds into a beautiful synth part from T J Allen. Mally has a heavy accent but one which dovetails perfectly with the transiting sung vocal from Anna Calvi, who provides a dynamic input not unlike the one on her own ‘Don’t beat the girl out of my boy’. An excellent track and one which could have gone on longer than its two minutes forty four seconds.

‘Not without pain’ is reprised on Track 9 but without any vocals and less effectively initially, until halfway through when what sounds like a harmonium chorus joins forces with a tubular bell and a haunting synth contribution, and that is mightily effective. Looking at the few instruments she used to record this I’m not sure quite how she did it; collectively the piece could have featured on the soundtrack to Lars von Trier’s film ‘Melancholia’, it is that atmospheric. I know Mally Harpaz is influenced by films and she repays the complement with this one.

‘Don Quijote’, after an opening section that could be the soundtrack from ‘Texas Chainsaw Massacre’, shifts the album up-tempo and with Mally Harpaz back behind the kit whence she began with some fast drum rolls. For some reason I was expecting lyrics, perhaps ‘Man of la Mancha’ style but it remains an instrumental throughout and does manage to evoke the image of tilting at windmills if that was its purpose.

‘Out from under the shadow’ is a slow burner in which Harpaz again plays most of the instruments. Built around another simple piano riff and mournful strings it picks up a full, powerful, orchestral sound and one in which, this time, you can hear the (subdued) guitar contribution from Anna Calvi.

The album concludes with ‘Starry Night’, which gently plays it out.

I think it’s fair to say that the musical cognoscenti, in North London at least, has awaited this album with as much anticipation as Hazel Iris’ last year, along with Calvi fans around the world who understand what Mally Harpaz is about.

She hasn’t set out to set the world on fire with it and you won’t be tapping your feet to it. What she has achieved is to gain recognition as a serious composer in her own right and to step out, if only fleetingly, of the immense shadow of Anna Calvi.

I’m certain there will be musicians and others in the broader artistic sphere hearing this album and wondering how they can work with Mally Harpaz, rather than the other way around.

‘Zoom In, Zoom Out’ is released on 5th April.