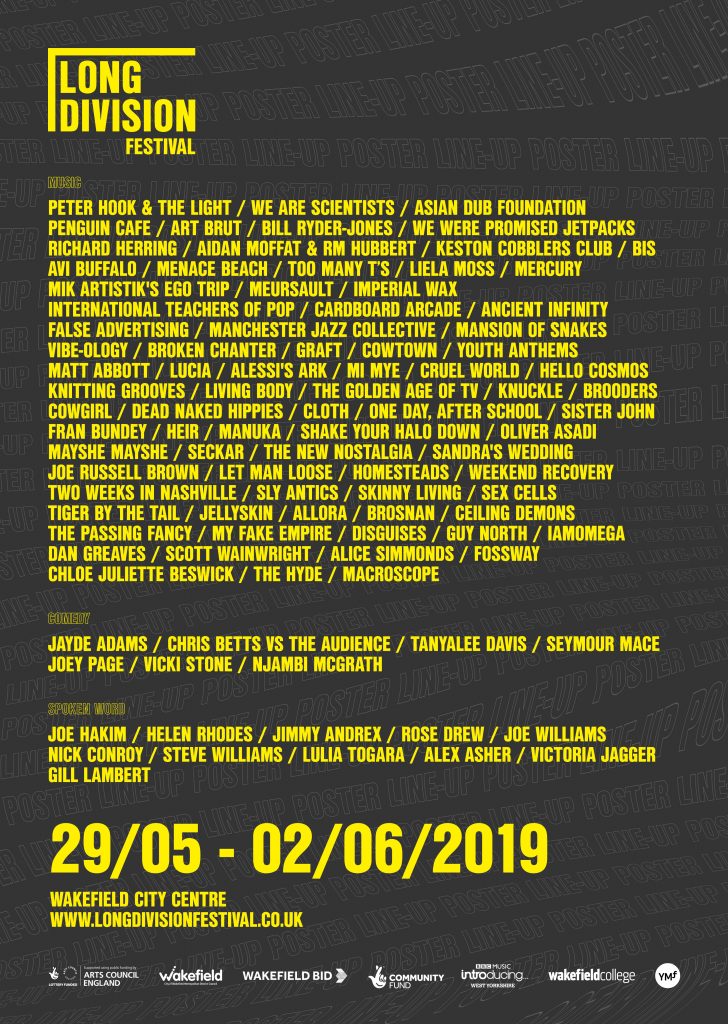 In a little over three weeks’ time the rather wonderful Long Division Festival returns once more to the cathedral city of Wakefield. Taking place in numerous venues dotted across the city centre, the event is a celebration of artistic independence and DIY culture bringing to us what promises to be a tremendous programme of events and activities spread over five days and featuring some truly great musical, comedy, and spoken word acts.

This year’s Long Division begins on the Wednesday evening when it joins forces with Artwalk Wakefield to take part in what is their established, alternative night out in Wakefield, one that features every two months and sees various venues opening their doors for a range of visual arts, crafts, workshops, and live music performances.

The following night we are faced with the first of what will be many difficult choices at Long Division as Ric Neale’s Monochrome – an intimate monthly piano night which is held at The Jolly Tap public house – overlaps with Scots’ musicians Meursault and Mi Mye who will both be performing in The Establishment bar’s monthly music night.

Friday daytime lends itself to a range of community-based activities whilst the weekend begins in earnest at 7pm courtesy of The Big Fat Festival Quiz. To be held in a pop-up marquee in the city’s Bull Ring, this huge charity quiz is in aid of Andy’s Man Club, a charitable organisation set up in response to the significant problem of suicide being the biggest killer of men who are under the age of 45.

Saturday has always been the huge centrepoint of the Long Division Festival and this year is absolutely no exception with more than 60 musical acts scheduled to perform across some 14 venues in the city centre from midday until midnight and beyond, including what will be a number of free entry stages.

Heading up the bill in 2019 are Peter Hook and The Light, with the Joy Division/New Order legend closing out proceedings at Warehouse 23, where he will be preceded by first Asian Dub Foundation with their highly energised and politicised blend of bhangra, hip-hop, rock and dub reggae and then the New York City-based rockers We Are Scientists. The historic grandiloquence of the Theatre Royal plays host to both the fantastic West Kirby tunesmith Bill Ryder-Jones and the highly imaginative Penguin Cafe whilst the Mechanics Theatre will welcome the Berlin-based Art Brut who will be adding even more international flavour to the festival.

Further down the bill and emphasising Long Division’s strong commitment to both grassroots music and the promotion of local talent there will be appearances from the Huddersfield trio Knuckle, whose upcoming debut album Life Is Hard When You’re Soft Inside is released later this month; Cowgirl the ultimate rock’n’roll band from York; the self-described dynamic, over-stimulated indie rock of Leeds’ Cowtown and also coming the short distance down the M1 from the very same city are The Golden Age of TV and Dead Naked Hippies, and not to be outdone, Wakefield is represented by amongst many others, DJ Knitting Grooves and the musical project One Day, After School.

And then on Sunday bringing this year’s Long Division Festival to what is surely going to be a most triumphant close in the Theatre Royal will be the English stand-up comedian, comedy writer and host of the award-winning podcast RHLSTP, Richard Herring.

Tickets are on sale HERE

And just to get you a little more in the mood, why not take a peek at this video featuring some of the highlights from last year’s event: