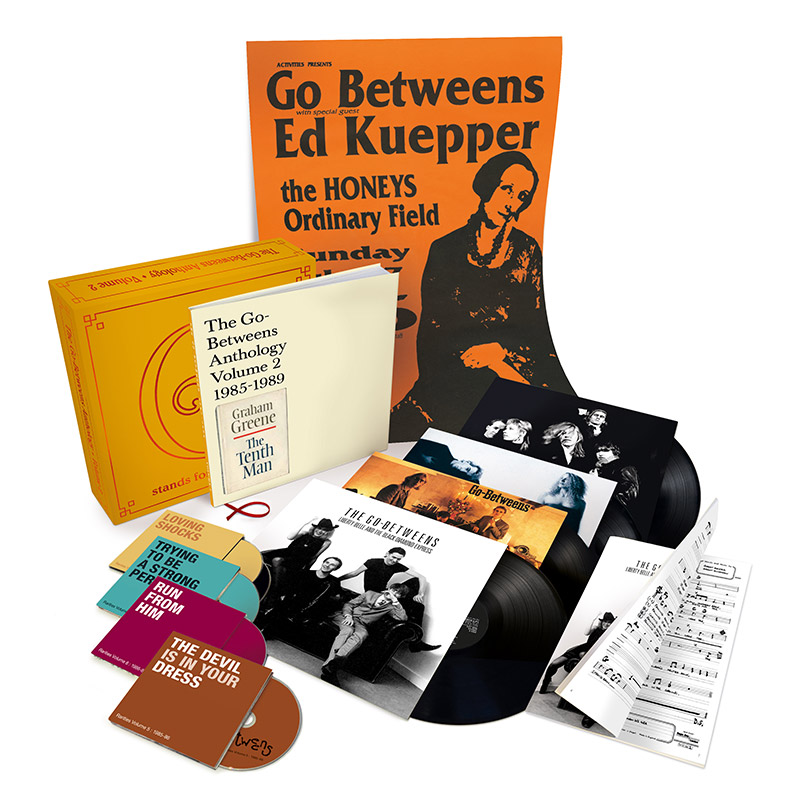 Domino have announced details of the second installment of the anthology series documenting The Go-Betweens. G Stands For Go-Betweens Volume 2: 1985 -1989 released on the 6th of December extensively documents the band’s creative output in the latter half of the Eighties in an ambitious box containing five vinyl LPs, five compact discs and an extensive 112-page book, featuring a trove of archival photos and extensive historical liner notes from founding member Robert Forster, along with additional pieces from guest essayists, fans and contemporaries.

The box set captures the band’s output from 1985 through 1989 and includes the first vinyl re-pressings of the three mid-period studio albums in over thirty years (Liberty Belle And The Black Diamond Express, Tallulah & 16 Lovers Lane), all re-mastered from the original analogue tapes. G Stands For Go-Betweens Volume 2 also includes an eighteen-song double LP of the band performing live at London’s legendary Town & Country Club on May 10th, 1987, on the cusp of the release of Tallulah.

Additionally, the set comes with five compact discs of their b-sides, radio sessions & rare, hard-to-find and unreleased demos, including a collection of 28 demos that McLennan and Forster recorded with old ally Tony Cohen, intended for what was supposed to be the group’s seventh album before the band’s split at the end of the Eighties.  Though some of these songs would materialize on solo albums soon after, this will mark the first official release for many of these rare gems.

For a complete tracklist and in-depth information on this release, please visit the following:

“The Go-Betweens were formed by Robert Forster and Grant McLennan in Brisbane, Australia in 1978 while studying at the University of Queensland. Augmented by various drummers and guests, they recorded a series of acclaimed singles and eventually were joined by drummer Lindy Morrison.  After making a pair of seminal albums for Rough Trade (Send Me A Lullaby & Before Hollywood), the trio became a quartet, adding Robert Vickers on bass.

G Stands For Go-Betweens Volume 2 picks up the story from there, documenting the group’s middle period.  After a brief dalliance with Sire Records on Spring Hill Fair, the band regrouped and secured a new deal with Beggars Banquet in the UK.  Liberty Belle And The Black Diamond Express displays the band rising to challenge with a renewed swagger and Forster and McLennan penning some of their finest tunes.  Wanting to capitalize on the new momentum, the group stretched out literally and figuratively with the timely Tallulah, which saw them add multi-instrumentalist and vocalist Amanda Brown.  Returning home to Australia, The Go-Betweens made what was to be the swansong for the first phase of the group, the graceful and gorgeous 16 Lovers Lane.  Surely ours is the only parallel universe where “Streets Of Your Town,” the lead single from the album, wasn’t a worldwide smash.  Regardless, the success of the album did see the band making their greatest commercial in-roads, including in America, where the album saw its release through Capitol Records.  The campaign saw the band undertake a relentless touring schedule in support of the album, including multiple tours with R.E.M.  The band, exhausted and fractured, parted ways at the end of 1989.

Forster and McLennan went on to extensive solo careers before reuniting in 2000 and making three more Go-Betweens album together (to be documented in G Stands For Go-Betweens Volume 3), including the ARIA-winning finalé, Oceans Apart. Sadly, the reunion came to a sudden end when McLennan passed away on May 6th, 2006 from a heart attack and The Go-Betweens disbanded for good.

In the time since the release of the last box set, Forster wrote Grant & I, a moving memoir that explores both their musical partnership and their lasting friendship.   In addition, 2017 saw the cinematic release of Right Here, filmmaker Kriv Stenders’ documentary about the group. Lastly, Robert released his seventh solo album, Inferno, this year to wide acclaim and his greatest solo chart success in this young century.”

Forster will be touring throughout the year in support of Inferno, including his first US tour dates since 2008: