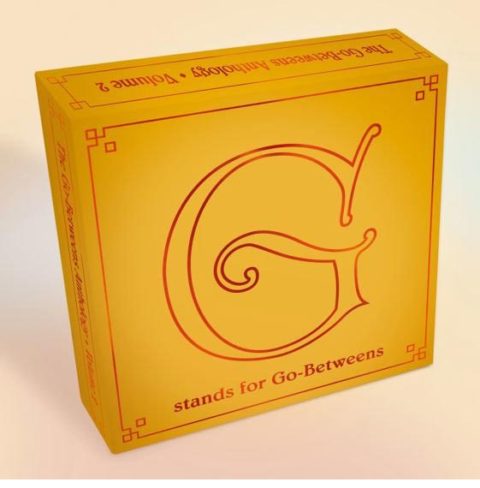 Many artists – New Order, The Cure, Nick Cave, The Smiths, The Cocteau Twins, Talk Talk, Pet Shop Boys to name but a handful – had purple patches in the mid-late 80s, but patches got none more purple than that enjoyed by Brisbane bedsit romantics The Go-Betweens. Critically adored, commercially ignored, they sublimated a love of the Velvets, Television and The Modern Lovers and a literary/poetic sensibility that no band has ever rivalled, into pop music of such touching, understated genius it continues to take the breath away at thirty years’ remove.

This second volume of Domino’s GBs retrospectives begins in 1985 with our heroes living in squalor in various London bedsits (they even houseshared with Nick Cave at one point, surely the greatest fly-on-the-wall documentary never made), newly – and incongruously – signed to goth label Beggars Banquet, and, having already made several fine albums of quirky, angular indie-pop, about to release a trio of records which, although they barely troubled the charts, would cement their reputation as arguably Australia’s greatest ever musical exports.

The first of those records, and the first disc here – Liberty Belle & the Black Diamond Express – is the moment the potential of those early records is finally realised, and their first masterpiece. Jaunty opener ‘Spring Rain’ sets up their manifesto of love, poetry and wonder from the off with Forster’s brilliant line “These people are excited – by their cars!!! I want surprises…”, echoing Martin Amis’ theory that “poets shouldn’t drive”. It’s the same angular, literate indie-pop as before but the sound is fuller, the songwriting more confident, the poetic imagery more striking (did anyone in the 80s write a better lyric than “When the rain hit the roof/With the sound of a finished kiss/Like a lip lifted from a lip”? Of course they didn’t). They write – as they always did – about love, but not with grand sweeping gestures, doomed romanticism or epic tragedy, but in the small things, the barely seen gestures, the little intimacies, and in doing so they just break your heart every time. Just imagine being the subject of a love song like McLennan’s ‘In The Core Of a Flame’, or a mea culpa like Forster’s ‘Apology Accepted’.

1986’s Tallulah adds violinist Amanda Brown to the lineup and sees the band continue to push their art to another level, and in a slightly more commercial direction. How this album didn’t spawn at least two or three hit singles will forever remain a mystery, whether it’s the shamelessly romantic opener ‘Right Here’ (“You say you’re undone by his kiss/But don’t you think that for once in your life it should be like this?”); Forster’s giddy ‘I Just Get Caught Out’, whose line “And then she said hello” crams so much meaning and desire into just five words; or best of all ‘Bye Bye Pride’, for me their greatest song, McLennan at his lyrical peak (“Turned the fan off, and went for a walk by the lights down on Shield Street/The birds in the trees open their wings/He goes home again”) and the ultimate expression of everything that was great about The Go-Betweens in 1986.

1988’s 16 Lovers Lane sees the GBs make a bid for commercial success to add to their already unimpeachable critical status, an entire album’s worth of swooning romantic pop a la ‘Bye Bye Pride’ or ‘Bachelor Kisses’. As I wrote in my 2013 GIITTV piece about the record, when it first came out I HATED it – I didn’t go to the Go-Betweens for slick, largely acoustic pop records – but a week later I’d almost worn the tape out and 30 years on it remains my most listened-to album ever. It’s faultless, the band’s angles smoothed off without losing any of the wit or charm, and both songwriters on the same wavelength, and comfortably the most romantic album ever made. Sadly, despite some minor chart action for the swoonsome ‘Streets of Your Town’ single (like The Triffids’ ‘Wide Open Road’ or The Church’s ‘Under the Milky Way’, one of those great, widescreen, evocative Australian songs) the public didn’t bite and, broke and disillusioned, it spelled the end – for another 11 years at least – of this magical band.

Rejoice ye Go-Betweens completists for on top of the original three albums, G Stands for Go-Betweens Vol 2 adds another seven discs of live recordings, B-sides and demos, a lottery win for fanboys such as myself, though possibly somewhat hard going for casual listeners (not that the GBs tend to have casual listeners, but you get my point). Hard to take in at one sitting, and the endless demo versions of album songs are utterly inessential, so let me sort the wheat from the chaff for you and point you to some wonderful 16LL-era B-sides, in particular the wonderful ‘Casanova’s Last Words’; a sublime 1988 radio session; and best of all, the Loving Shocks set, 28 unreleased demos originally written for a never-recorded follow-up to 16LL, and some of which subsequently appeared on Forster & McLennan’s early solo albums. The demos see the two singers combine the romanticism of 16LL with the more literary, bohemian style of previous records and there is a truly great lost album in here somewhere, with the perfect pop of McLennan’s ‘Easy Come Easy Go’ rubbing up against Forster’s sardonic ‘Art Cinema’ (“$300 in my hand/All the Rosselini I can stand”). But if there’s one telling song here, it’s McLennan’s weary ‘The Day My Eyes Came Back’, the line “Gotta get off this rollercoaster/Learn to use my brand new toaster” expressing his frustration at setting pearls before swine and getting nowhere.

As their first post-reformation song put it, there is indeed magic in here, and lots of it. You’ll laugh, you’ll cry, you’ll fall in love with this band – and your wife/husband/partner – all over again. Stephen Fry once wrote that reading PG Wodehouse makes you a nicer person, and I’ve always maintained that the same is true of listening to The Go-Betweens. 10 discs of this and I feel positively saintly.