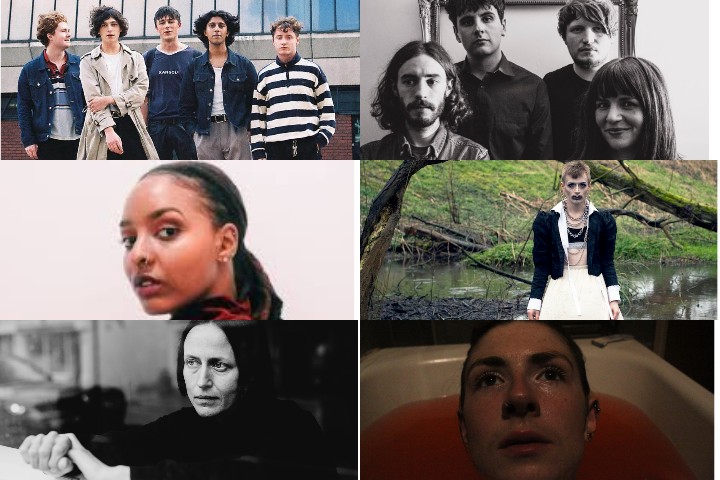 Hailing from Todmorden and Burnley, The Goa Express style themselves as “Brooklyn new wave tinged with the northern psyche.” Although the intensity of their friendship has resulted in the occasional bust-up, along the way, it is outweighed by their chemistry. Together, James Douglas Clarke (Guitar + Vocals), Joe Clarke (Keys), Joey Stein (Lead Guitar), Naham Muzaffar (Bass) and Sam Launder (Drums) craft ever evolving waves of fuzzy noise pop.

Since coming to Manchester, The Goa Express have enjoyed support slots with international bands like The Murlocs, Moon Duo and Mystic Braves as well as performing live with domestic indie champions such as Cabbage, YAK and The Orielles. Whilst at university, The Goa Express have played headline shows at both Manchester’s Band On The Wall and The Castle Hotel, as well as slots at Liverpool Psych Festival and the Leeds based, Karma festival.

Their storming debut single ‘The Day’ released last year, was quite an opening salvo. Hazy, anthemic indie rock is the dominating feature of The Goa Express’ sound and ‘The Day’ is a guitar-driven bullet train careering down a rickety track. Energetic, noisy and catchy with hints of the Psychedelic Furs and the Stooges, what’s not to like? (Nad Khan)

Seatbelts aka James Madden and Ryan Murphy formerly of Hooton Tennis Club, Abi Woods (keyboard, vocals) and drummer Alex Quinn caught our ears with the excellent series of songs lifted from inventive EPs throughout 2019, including the brilliant ‘Spanish Songs’, the sumptuous ‘Content Crush’ and the awesome ‘Capitalist Confession’. A boy/girl seesawing trawl through capitalist confessions and the contradiction and allure of advertising and the system that enslaves us into wanting more. Imaginative and playful it flips between spoken word adverts, and delightful catchy melodies and instrumental interludes, like Ooberman jamming with Blackbox Recorder, original and addictive.

Recorded in the Scottish Highlands and produced by Edwyn Collins – ‘Black Spring’ is a more meditative song that shows off their wistful side. As the resignation drips from this reflective epic. Lyrically inspired by the writings of Henry Miller, the track explores the author’s feeling of ‘great change’, and the notion of a black spring forming. “A dream or a nightmare? When your friends become Uber drivers, Deliveroo drop-ships, and investment bankers, your family see more of you on Instagram, and Brexit promises a ‘progress’ we have yet to clearly define.” This track is also the first of many to be released from a larger collection, cut during a summer session in Edwyn’s studio. This Merseyside bands imaginative brand of always evolving avant-psych pop is reflecting the bewildering contradictions of growing up as a young person in Britain.

Essex native and Liverpool resident courtesy of LIPA – she took to the city’s quirks so keenly she stayed on after graduation– Beija Flo has earned a reputation as its most creative and innovative new performer.  Her live shows are a unique combination of theatre, spoken word – her honest, descriptive and often intimate monologues about herself between songs might be impromptu but are rich with content – and refreshingly honest and expressive songwriting. With BODEGA and Charles Howl support slots in Liverpool plus appearances at Sound City and Futureyard festivals under her belt, Beija Flo as a musician is finding her feet somewhat, but as part of the Eggy Records roster alongside Eyesore & The Jinx, her early singles impress. ‘Mary’ –the tale of her wickedly naughty alter ego – is a sparse, short drama – and more recently the raw and vulnerable ‘Nudes’, a confessional of emotions if you like, Beija lays out the facts baldly over an unsettling electronic bed. The singer, poet, artist, photographer and life drawing model pulls on all her fields of creativity, making her future most intriguing.
(Cath Holland)

Layfullstop made her entrance with 2018’s vibrant ‘Colour Reactions’ mixtape. Her recent EP Cherries showed off all her sides the title track finds her in full flow over an off-kilter beat from frequent collaborator Pitch. It manages to be both immediate and subtle, with Lay sounding at ease over the lush production. It’s a lush summer jam laced with sway and melodies, and glistening rhymes that details a strength and feminism that comes through personal growth. It’s a delicious summery cocktail that blurs RnB, nu-soul and hip hop, into a refreshing cut made for sunburnt block parties. ‘PMT’ meanwhile is more reflective with a quick fire beat is flowing with introspective rhymes, it froths like a pot on the boil. As she asserts her artistry and womanhood in one powerful cut.
(Bill Cummings)

For the last couple of years LOFT, aka Aya Sinclair, has quietly been producing some of the most exciting, mind-bending electronic music to emerge out of a constantly mutating scene of underground, DIY club producers. ‘and depart from mono games’, her new EP, and her debut release on Tri Angle Records, came out last May, an exhilarating continuation of a sound that’s increasingly hard to classify, separating her from the crowd and confirming why she’s undoubtedly one to watch.

First single ‘That Hyde Trakk’, is a stunning example of LOFT’s impressive artistic growth since emerging in 2016, transforming what could have been standard 90s drum and bass elements into genuinely new shapes. Barking, quite bizarre yet utterly thrilling electronic music that turns your expectations upside down. A frantic tapestry of chirping beats gives way to woozy synth blooms, swelling into a glorious ambient crescendo powered by accelerating breakbeat and sun-washed bass. Aphex Twin, Burial an Roni Size turned inside out and it sounds quite incredible. (Bill Cummings)

With her forthcoming LP Debris, Keeley Forsyth promises one of the most artistically ambitious records of the year. Already well-established as a character actor on film and TV, the Oldham artist been circling this musical project for the last several years. Early signs are good. Composer Matthew Bourne is bringing the synths and strings, and there is a Pina Bausch-style theatrical performance of the album planned for later this year.

Her songs venture into the desolate, midnight-coloured territory, places of enveloping transformation and trauma. ‘Is this the remarkable point of no return?’ she sings on ‘Start Again’ in a deep vibrato that somehow evokes both Andrew Eldritch and Nina Simone. If you fell for Kathryn Joseph’s from when I wake the want is you are going to be well smitten with this one.(Colin Bond)