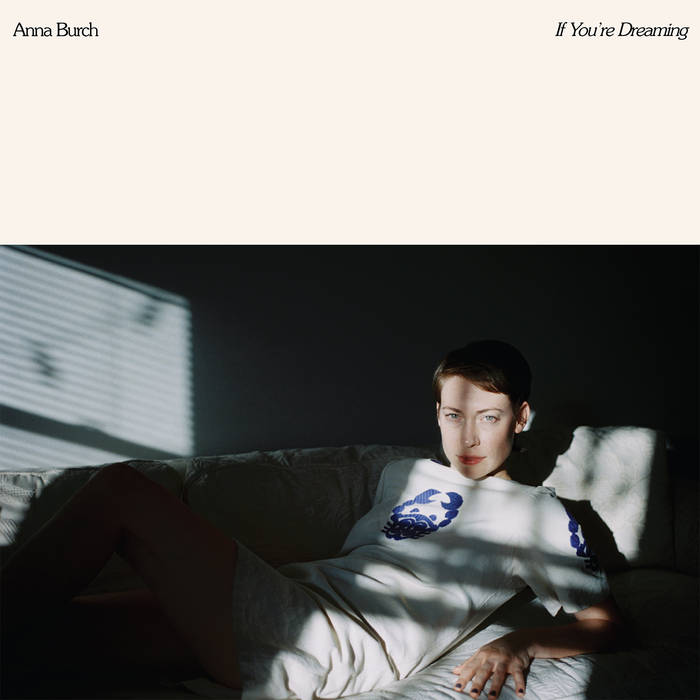 If You’re Dreaming is the second solo album from Detroit’s Anna Burch.

Debut Quit The Curse was very well received. It was a bright introduction to Anna’s indie-pop leanings. It was a politely energetic record.

That is not to say If You’re Dreaming is not. There is a a greater sophistication to the way the songs are built, but there’s more nuance to the interweaving of melodies and the themes being explored are deeper.

The record feels confident, shackles off and feet found.

‘I Can’t Sleep’ is a gentle opening track that focuses on ethereal vocals and an at first simple chord progression. Three minutes into the track you’re greeted with a couple of unconventional chord changes that urge you into an upright position. It’s a theme that repeats wonderfully as the album progresses.

60’s and 90’s guitar sounds splash throughout ‘Party’s Over’, clocking in just under three minutes it could go on for a little longer, but its brevity encompasses the consideration that has clearly been put into this album. Any more and it could be cliched, always leave the listener wanting more.

Only two of the twelve tracks on If You’re Dreaming break the four minute barrier. There can be a tendency to over-create and force songs to be longer than they need, just because as an artist, you feel the need to fill space. Not so with Anna; she’s got the art of the three and half minute(ish) song that is catchy, alluring or provocative down to a fine art.

As direct as the record gets, ‘Ask Me To’ is head-swayer that gives Anna a platform to step away from her softly almost-whispered vocals.

At one hundred and one seconds, ‘Keep It Warm’ is a brief instrumental interlude with a softly finger-picked arpeggio guitar supported with piano twinklings. It could be surplus to requirements on other records, but it’s a neat glue that binds the first and second half of the LP together.

The chorus in ‘Go It Alone’ is fabulous, demonstrating that established expectations of what melodies belong over which chords should be forgotten. The same can be said for ‘Tell Me What’s True’; led by lightly played electric piano, it’s an intelligent, hauntingly beautiful track.

Lead single ‘Not So Bad’ returns to the sound that was present on Quit The Curse. It is the most ‘poppy’ song on the album but again is attentive – the understated saxophony throughout is hypnotic. The accentuation of the ‘c’ of ‘instinct’ as Anna sings “What is this instinct, to hate on everything?” gives a little insight into her exact thoughts on the subject.

If You’re Dreaming is an absorbing listen. It’s a thoughtful, nerveless record that excels as a complete body of work and absolutely must be listened to in its entirety again and again.

If You’re Dreaming is available on Friday 3rd April on Polyvinyl Records.