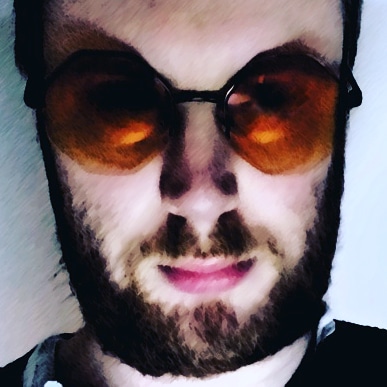 Sunbane is an incredible electronic artist based in Cardiff who creates unique sonic vistas full of experimental sounds and untapped beauty. Their latest release ‘Vondel Park’ was recently included in a recent edition of our Tracks of the Week where we said: “huge, wide vistas of ambient sound unfold into a beautiful ode to Vondel Park, with naturistic sounds juxtaposed with electronic synths and a deliciously soft vocal to create an altogether unique sonic experience.”

I was keen to learn more about this interesting talent so I’ve asked them a handful of questions:

Relaxing for the first time in months – new baby in June, finished the record in July, promo in August, PhD viva in September, all whilst working full time.  I’m having a couple of weeks of rare downtime before starting the next project.

Sunbane is a unique and interesting moniker, where does it come from? Is there a story behind why you chose this name?

I used to go by Eigen Lights, which is an obscure neuropsychiatric phenomenon experienced by people in sensory deprivation.  I got really bored of explaining how to pronounce it so looked for something different.  I happened to be reading The Chronicles of Thomas Covenant by Stephen Donaldson (I am an unashamed fantasy/SF geek and he is probably my favourite author).  Sunbane is the name of the apocalyptic threat facing the world in the Second Chronicles and it felt like a good fit so I ran with it.

Tell me about your new song, “Vondel Park” and the concept behind the song & music video.

It’s named for a sound the I heard during a very… specific experience in Amsterdam’s Vondel Park.  The granulated Ebow guitar that calls and responds to Saccharyn’s vocals is an attempt to approximate that noise.

In terms of the lyrics – the first part of the album is very much about the warm embrace of nostalgia, with a slight melancholy underpinning given that dwelling on past glories is quite a solipsistic way to live, so there is a cynicism there too.  Saccharyn wrote the lyrics with a little guidance on the theme – the only contribution I made was the repetition of the opening line (‘numb your mind’) at the end of the track.

It serves as a gentle entry point to the record – the second half in particular gets far darker and weirder.  It’s nice to welcome the listener in with delicate psychedelic lullabies of unrequited love before you start yelping at them about fascism through guitar pedal.

The video is more of a visualisation really – each part in the song represented by something happening on screen.  This is mostly closeups of synths, or my ebow flashing in front of the camera.  The singing heads are actually my shadow miming to the lyrics.  We had planned to do some sort of live performance video, but lockdown forced a bit of improvisation.  It was fun.

The album (Crooked Timber) came out on 25th September – the main focus will be on finding ways to promote that.  There are a couple more singles (and hopefully videos) with remixes backing them.  Then hopefully a remix album out next year.  One day I will get to play it live too, which I’m looking forward to.  After that – I’ll likely have some new demos to work up by that time.  At the moment the slate is almost clear though.

When I first started producing (on Garage Band, years ago) I ended up with three demos which eventually became ‘The Alchemist’, from my first LP soma, ‘Love Slays the Demon’ which found its way on to the Memory Hole (I) EP and ‘Spend the Summer‘, which ended up on Crooked Timber.  They were really embryonic versions – I had no idea how to use a compressor or an EQ or really anything.

If you imagine the finished version of those tracks with a lot more rubbish acoustic-electric guitar jamming and a whole lot less polish and structure then you’re there.  Now I sort of wish I’d kept the old files but I got rid a long time ago.  I think that ‘The Alchemist’ went through another three versions before it was finished, and two each for the other tracks.  I don’t like to let go of ideas if I think they can work.

There is so much talent out there – I put out a compilation of underground electronica back in June with Cardiff Electronic Producers Network and the quality across the thirty tracks just blew me away. There are some really interesting and talented performers around too and we have been well supported by a couple of venues (Gwdihw RIP and The Moon) in putting on shows.  The scene is still there, waiting, working… whatever happens, there is the will to get things started again when the world re-opens. As with everywhere else, the precarious state of the events industry is obviously a concern though.

My dad is a huge Pink Floyd fan and I was well indoctrinated at a young age. Animals is still my favourite record by anyone. Radiohead, NIN, Primal Scream, Massive Attack and Underworld are probably the biggest influences on the sound I’m trying to make.  Mid-period Kanye West (808, MBDTF and Yeezus) also looms pretty large, although obviously, it’s a little shameful to admit that these days… In terms of more contemporary stuff, Nicolas Jaar and Andy Stott are both phenomenal.

Since starting to release with Disintegration State I’ve been pretty immersed in a lot of the UK’s underground electronica scene and there is an embarrassment of riches out there if you know where to look.  Most recently the new records from Sarmism and Field Lines Cartographer have blown me away, Ghost Halo’s Chemical Rain from earlier in the year too.

From a production point of view, Burial or Four Tet would be great.  I would just sit in the corner taking notes on how they do what they do.  Vocalist-wise… probably Karl Hyde from Underworld.

This is probably the hardest question you’ve asked – I promote gigs as well as playing (or did before the world closed) and honestly I can’t strictly remember which ones I played and which I just watched.  I have to pick someone though so I will go with Pete… aka Sakanaman, aka FPS, aka Amorphis.Alfa… Every time I see him he’s got a different alias and a completely new sound and every time it’s been fantastic.  I’m torn between hoping he settles into something and starts releasing and hoping he keeps on hopping around and surprising me.

It’s been a great month for releases – the new Deftones album is the best thing they’ve done since White Pony, Sufjan Steven’s new release ticks a lot of my favourite boxes as well as the releases from Sarmism and Field Lines Cartographer I mentioned.  Jacob Nico’s Fool Season too.  September was great.

I’m also writing this on the 20th anniversary of Radiohead’s Kid A, so that’s been on today too.