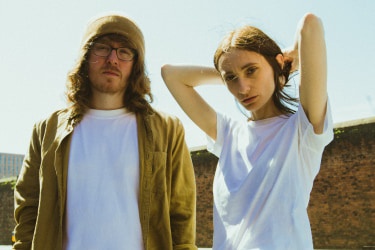 King Hannah led by the creative force of Hannah Merrick and Craig Whittle released their awesome debut EP ‘Tell Me Your Mind And I’ll Tell You Mine’ at the end of last month.

While ‘Meal Deal‘ is insidious and weaving with Hannah’s effortlessly brilliant melody that is part sinister part alluring, it gradually envelops from country scorched riffing and elastic and grooving percussion to crushing guitars into an incredible epic. About finding somewhere to live, it conjures images of malnourished spiders in baths and overpriced flats with too many bathrooms.

For fans of the bittersweet atmospheres of Mazzy Star or the intimate and slowly building sound of Grouper, King Hannah’s first release on City Slang is at once expansive, soothing and intoxicating EP, that possess an intriguing mysteriousness and a vast wealth of promise. We decided to catch up with King Hannah to find out more about this Liverpool based duo.

What was the first song you ever wrote? What was it like?

Hannah – It was aaaaaawful!!! It was about being a tomboy-ish, angsty teenager, not fitting in. Thank goodness there’s no recording of it anywhere!!

Craig – Probably when I was like 13 or 14, when I started writing songs with my friend, Adam. It was probably some soppy, acoustic number but thankfully was lost forever.

How did you meet each other?

Craig – I saw Hannah performing at a University showcase, the music that night was pretty awful, but Hannah was not. She played a folkish song on guitar with no accompaniment and her voice blew me away. Fast forward a few years, I started working in a bar and Hannah was assigned to show me how to clean tables, and I spent the next few months trying to convince her to jam.

Hannah – My confidence was very very low, which is what took me so long. It certainly wasn’t a lack of drive to make music.

Hannah – If you mean my little village in North Wales, it’s not exactly thriving!

Craig – Liverpool scene’s pretty good, though we seem to have a habit of closing down venues, which isn’t so good.

How did you end up signing to City slang?

Hannah & Craig – Well, we originally released Crème Brûlée ourselves back in May 2019. One month later, Krista from City Slang got in touch to say how much she loved the track and asked to hear more music. At the time, we had nothing we loved enough to send her, so we very quickly wrote and recorded a few more songs and sent them to Krista one-by-one, as and when we thought they were good enough to be heard! Thankfully, she liked them!

Tell is about your new EP, it’s fantastic! When did the songs start life?

Thank you very much!! I guess it came about when we realised how big an opportunity we had landed. We originally started with Meal Deal, Bill Tench and The Sea Has Stretch Marks, and then decided to build sounds and a story around them, rather than it being three individual songs.

There’s a real sense of space and atmosphere on the songs do you think its important to let songs breathe and grow?

Yes, yes and yes, space and dynamics are really important to us. The bands we love do this really well, Portishead, Smog, Mazzy Star…to be honest, every single good band in the world! It’s so easy to keep adding layers to hide insecurities in music, which ultimately muddies the waters. It’s something we’re always trying to improve on.

I get a real longing about Creme Brûlée what its about?

Hannah – Thank you! It’s really just about longing for something or someone, and generally just being a bit miserable and not in a great place. It’s a sad song for sure.

‘Meal Deal’ has a almost poetic quality do you write the words before the music or does it vary?

Hannah – It really varies and there’s no right way of doing it either. I prefer it when the lyrics and melody are written at the same time, as there’s a much greater feeling of vulnerability and realness to it, but it doesn’t always happen that way. You’ve just got to keep writing, and whatever happens, happens!

Who did you work with on producing the EP?

There is a real naked brittle honesty to the sound is that what you were aiming for?

Thank you! Yes, definitely. We always want honesty and vulnerability to come through in our music.

Do you write songs as a form of therapy?  There’s a medicinal quality to the words.

Hannah – It’s weird because I’d never describe it that way, though it must be a form of therapy because I’ve always done it and always will. I tried stopping when I was in my mid-20’s because I thought it was making me too miserable but I picked it back up one month later because I missed it too much. So yes, I guess it is my form of therapy. I feel much better after I’ve written a good song.

We’re working on it, but we hope to be honest, vulnerable, dynamic, spacious, dark and tender. That’s 6 but as we said, we’re working on it! If anyone describes us as any of these words, then we’ll be happy!

Hannah & Craig – Anyone who is true to the art they make.

Hannah – I’m reallyyyyyyyyyyyyy struggling on this one!! I mean, singing with Courtney Barnett would be very very cool.

Craig –  I have this fantasy of being invited on stage by Bruce Springsteen and we sing Thunder Road on the same microphone but I’d settle for Dancing with him Courtney Cox style.

Are you working on an album?

Hannah & Craig – Indeed we are! We hope to have something out towards the end of next year.

How are you coping with no shows during lockdown?

Do you have dates lined up for next year? Pandemic permitting?

Hannah & Craig – We’ve nothing set-in-stone yet, though we’re working on it, so hopefully we’ll have a few cemented dates soon!