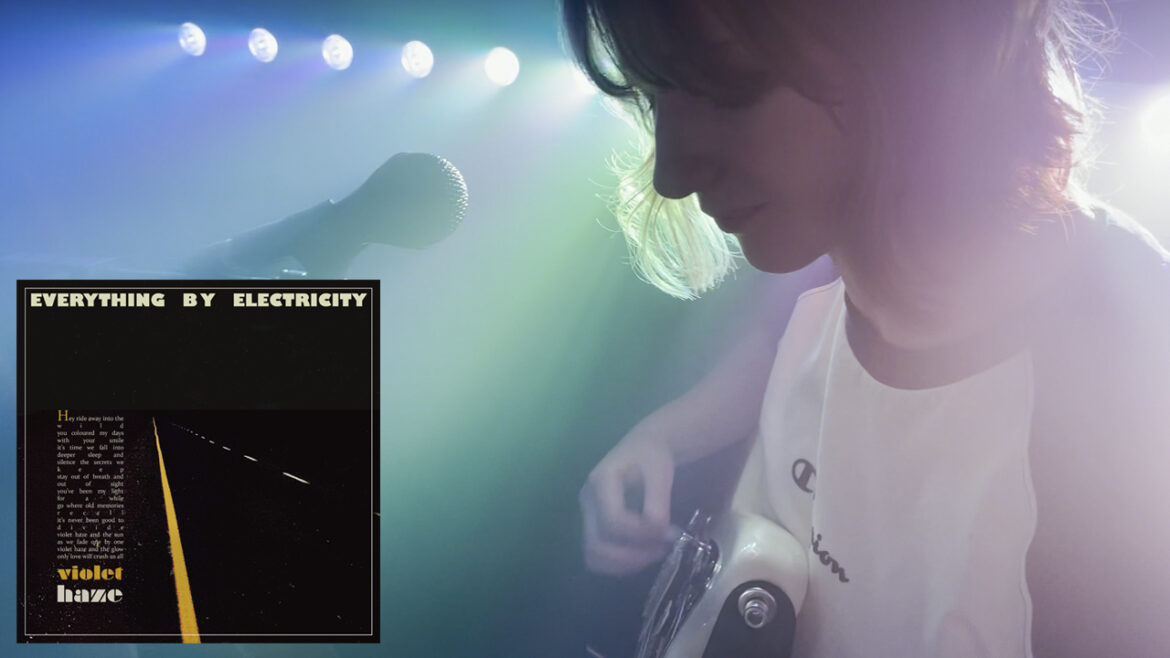 Violet Haze is the beguiling new single release by Everything by Electricity, project of Siberian-born Yulia, out on the 21st January 2021. Today we debut the live video, It’s lifted from the upcoming debut album Time Without Time out February 2021.

It was written recorded & produced by Yulia, and mastered at Metropolis Studios, London (The XX, Lana Del Rey, Oasis + more).

A wave of modular synthesizers, sweeping guitars pierced by icy wistful vocals that hang in the air and are underpinned by an insistent processed beat, ‘Violet Haze’ speeds gloriously to the intersections of dream pop and synth wave, anchoring Yulia’s vocals deep in the composition with its instrumental counterparts. The result is a ghost lost in the machine of sound, redolent of early M83 or New Order.

Here’s what Yulia had to say about the track:

“While this song is fairly upbeat and even uplifting, lyrically, it’s a melancholic anthem of letting go, shutting down the memories and moving on. I wrote this song a few years ago when I locked myself for a week in my room working on the first batch of EbE demos without getting much sleep, it was exciting yet absolutely exhausting too and one early morning when I’ve finished a couple of first tracks, I went to bed thinking that I’m finally getting out of my room as soon as I wake up and as I’ve been falling asleep, this whole new song just came into my head out of nowhere and started with the line: “hey, ride away into the wild, you colored my days with your smile” and so on, with the finished melody, guitar riffs, everything. So I got up, grabbed my guitar and recorded it in “voice memos” on my phone so I could remember it the next day, that’s how I wrote “Violet Haze”. Couldn’t get out of that room for another week sadly but demoed “Violet Haze” instead”

Everything by Electricity is a musical project led by Siberian-born songwriter and multi-instrumentalist Yulia Bizyukova. Yulia grew up in the unremarkable city of Barnaul located in the south of Western Siberia where it snows for a third of the year and freezing cold winters last for up to five months. She began making music at age 10, when she started learning guitar and almost immediately started writing songs and formed a school band. On moving to London, Yulia quietly crafted a collection of demo material in her bedroom studio and expanded the live line-up with the addition of James (bass guitar) and Manoela (drums).

We tipped them a few years ago and said: “Everything by Electricity are redolent of mid-period New Order and the bittersweet majesty of ’80s 4AD groups, with an ambition and widescreen brilliance all of their own, the atmospheric production and spiralling synth patterns give you the feeling of staring into the middle distance at the blinking lights of the city’s winter sky.”