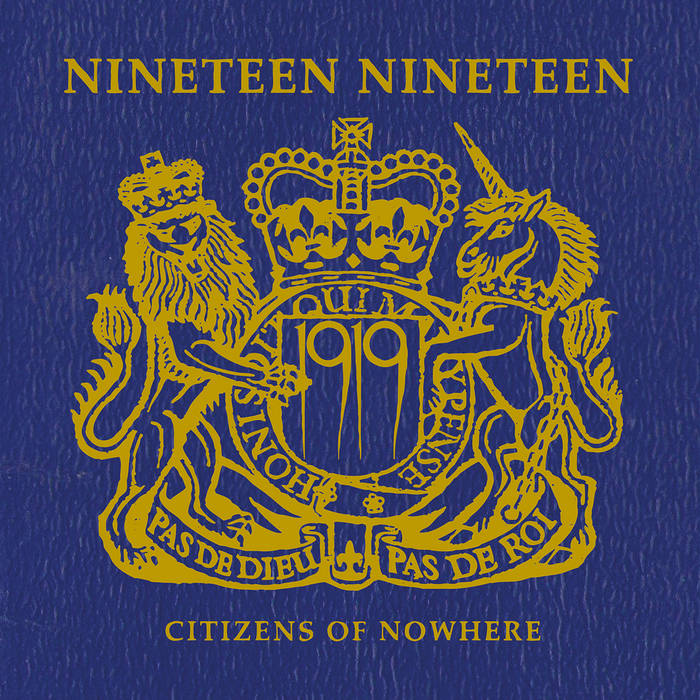 In their early days, they might’ve been described as playing to the same crowd as Killing Joke, Psychedelic Furs or a host of others categorised as goth-rock and were to release only one album, Machine in 1983, before the artists split, to explore other projects. Sputnik (Paul Drake) forming The Hive, as the rest of the band became Another Cinema. Since their re-emergence as 1919, the band were to release a further 2 albums, 2017s Bloodline and in 2019 Futurecide.

This new album, Citizens of Nowhere seamlessly slips from its predecessor emerging from the starting gates with “Borders”, a song that is tinged with political intent, from the lyric “…there’s no borders now, keep the aliens out…” almost unpalatable, but no doubt a prod at those in power.

Moving further into the album, ‘Feels Like Forever’ is like revisiting my favorite 90s slice indie rock, somewhere between Ride and Manic Street Preachers, although this is not copycat, these sounds are totally authentic, a rewriting of history in their own image. ‘Demigod’ continues this journey, as Goldhammer sings “…I’m a god, I’m a godamn dem-demigod…” perhaps something that might’ve worked slightly better in the 80s, but even in Y2K Britain, is maybe an idea that needs a bolt of electricity to rediscover this passionate worship. ‘Only The Good’ follows with the scrunch of musical backing adding to the atmosphere, I’m feeling Blade Runner musically, as Goldhammer sings “…well you know you’re just a nuisance in some old delicious shoes, I’ll let the algorithm lead the way…”, as from here this interesting dialogue just fades into an indistinguishable low murmur. ‘Singing To The Universe’ emerges from these shadows, as the number has the dark intent of Matt Bellamy singing for his absolution, but like ‘Feels Like Forever’, they fail to become just another photocopy and produce their own sound.

This really is another quite stunning episode in the life of this band, as the song ‘Jackie’ takes its first steps as the band stick this charabanc into reverse. I’m hearing shades of 90s indie-rock, interspersed with the memory (be it lived, or just learned), as their font man takes up the dialogue “…wide awake at midnight with an 80s film…”. Hearing this line, got me thinking that this could be autobiographical, having found myself wiling way those wee small hours in exactly the same way. Injecting the youth of musician and filmmaker Goldhammer when the band reformed, was a stroke of genius as he really makes this work. Ending this current chapter in their history, ‘A Guilded Cage’ takes another turn, bringing college rock into the mix. There is humor in the vocal as the chorus sings out “…something about these prison walls, it smells like Hugo Boss…”, again reminds me of the journey Muse had taken and as the clouds part they shine a ray of sunlight onto proceedings. I’m not sure how I feel about this, but there’s no escaping that as an album, I have mark it accordingly. This is one of the most surprising releases I have heard so far this year.