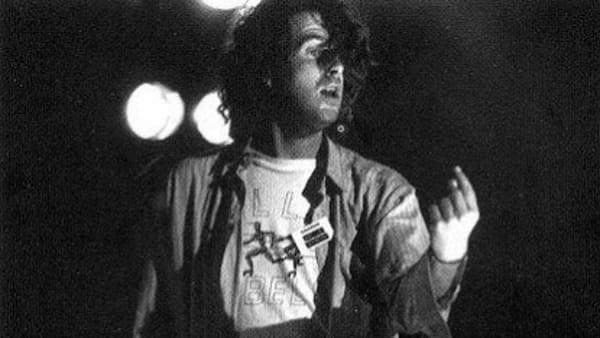 The tragic news emerged last night that he had passed away in Carmarthen over the weekend, aged just 56. He had been suffering from health issues including epilepsy and diabetes.

One of the giants of modern Welsh culture whose uncompromising, challenging and individual talent as a poet, vocalist, and musician made him one of the most idiosyncratic and influential Welsh artists of his generation. His attitude towards the artistic bourgeoisie and politicians in Wales, and his work in his own language at a time when Welsh bands were expected to sing in English, liberated and influenced a whole generation of bands such as Super Furry Animals, Country Teasers, The In Ou, Gorkys Zygotic Mynci, and many more who certainly owe a debt to the work done of the band. They were, in their own words, “non-conforming non-conformists.”

David R. Edwards talked of working in the Welsh Language:
“I’m biased because it’s my first language, but I do think it’s a more beautiful language than English; it works well for lyrics and poetry. And I feel that I can say more in Welsh than I can using English.”

His group Datblygu, (Welsh for ‘progress’, ‘evolution’ and/or ‘development’) started in 1982 while David R. Edwards was still at school in Aberteifi, Ceredigion. At first, it was him and instrumentalist T Wyn Davies before Patricia Morgan joined in 1984. Datblygu’s music was, as their name suggests, often experimental.

In their time they played in such diverse styles as experimental post punk, disco, country, nursery rhymes, crooning and just about anything else. The NME described them as “Kraftwerk with a hangover”. Their debut EP ‘Hwgr Grawth-Og’ was released in 1986 on Anhrefn. The following year they recorded the first of five John Peel sessions. Their run of early albums Wyau(1988), Pyst(1990) a Libertino(1994) serving as touchpoints in Welsh language music.

In a post on Twitter, Datblygu bandmate and friend Patricia Morgan offered: “It’s a huge pain for me to think that David is no longer with us. He was one of the best friends you could ever have. A huge and generous personality; a bear of a man. His writing touched people, to give succour, love, anger and humour.”

Gruff Rhys said: “Devastated, Dave was and is a gigantic figure. His contribution to the Welsh language can’t be overestimated and his work with Datblygu serves as a focal point for its vibrant counter-culture. I’ve no doubt his influence will grow and his songs will continue to serve as moral compasses and as sources of light to guide us through the darkness down the ages.”

A statement from Datblygu’s record label Ankst read: “Since the 1980s the existence of Datblygu made it clear that there was much more to Welsh-language culture and music than some pale copy of Anglo-American culture.

As a poet, David existed in hostile opposition to the traditional establishment and with his music he was determined to drag the ‘Sgymraeg’ culture and music screaming into the modern age in the 1980s. David formed Datblygu as a schoolboy back in 1982 and their most recent album – Cwm Gwagle – was released last Summer in the middle of the pandemic. Between these two dates, David’s voice and words have been a huge inspiration on generations of artists and musicians here in Wales and beyond.

Three of their most important works, the albums –  Wyau (1988), Pyst (1990), and Libertino (1994) – are recognised to be the pinnacle of modern Welsh language rock culture. A body of work that crossed cultures, languages and borders and also made John Peel one of their most loyal fans.

At the height of Cool Cymru in the late nineties, David withdrew from performing and releasing music and began a painful period of treatment for mental health problems. At the beginning of the new century, it was wonderful to see his health improve and David once again living an independent life in Carmarthen and once again releasing music as Datblygu with his lifelong friend and musical soul mate Patricia Morgan.

He also published his autobiography in 2009 – ‘Atgofion Hen Wanc’ – which he described as ‘no fflim fflam, no repetition, no boring bits that will send you to sleep’. Here he could share his feelings about Aberteifi, the love he felt for his parents and his musical heroes like Mark E.Smith, Captain Beefheart, Frank Sinatra and Ryan Davies. It also featured his loathing of authority and the disciplinarian nature of school and work, and also the nature of his life-long love/hate relationship with Wales and the Welsh which fed so much of his creativity.

In the press release for his last album ‘Cwm Gwagle’ released last year, he again re-iterated the unique nature of the band and his work – ‘Datblygu have only one thing in common with other Welsh bands and that is their shared use of the language, nothing else.’

David was a loving, faithful, creative, kind, funny and wise individual whose loss to us all will be immense. Without David, there would not have been any Ankst Records or Cool Cymru and without his friendship, talent and love over the decades life here in Wales would have been so much poorer and duller. His voice and his words will definitely live on and continue to astonish. Our debt to David is enormous and we thank him for sharing his life and talent with us. Our condolences go out to his family and friends as we deal with this heartbreaking news.