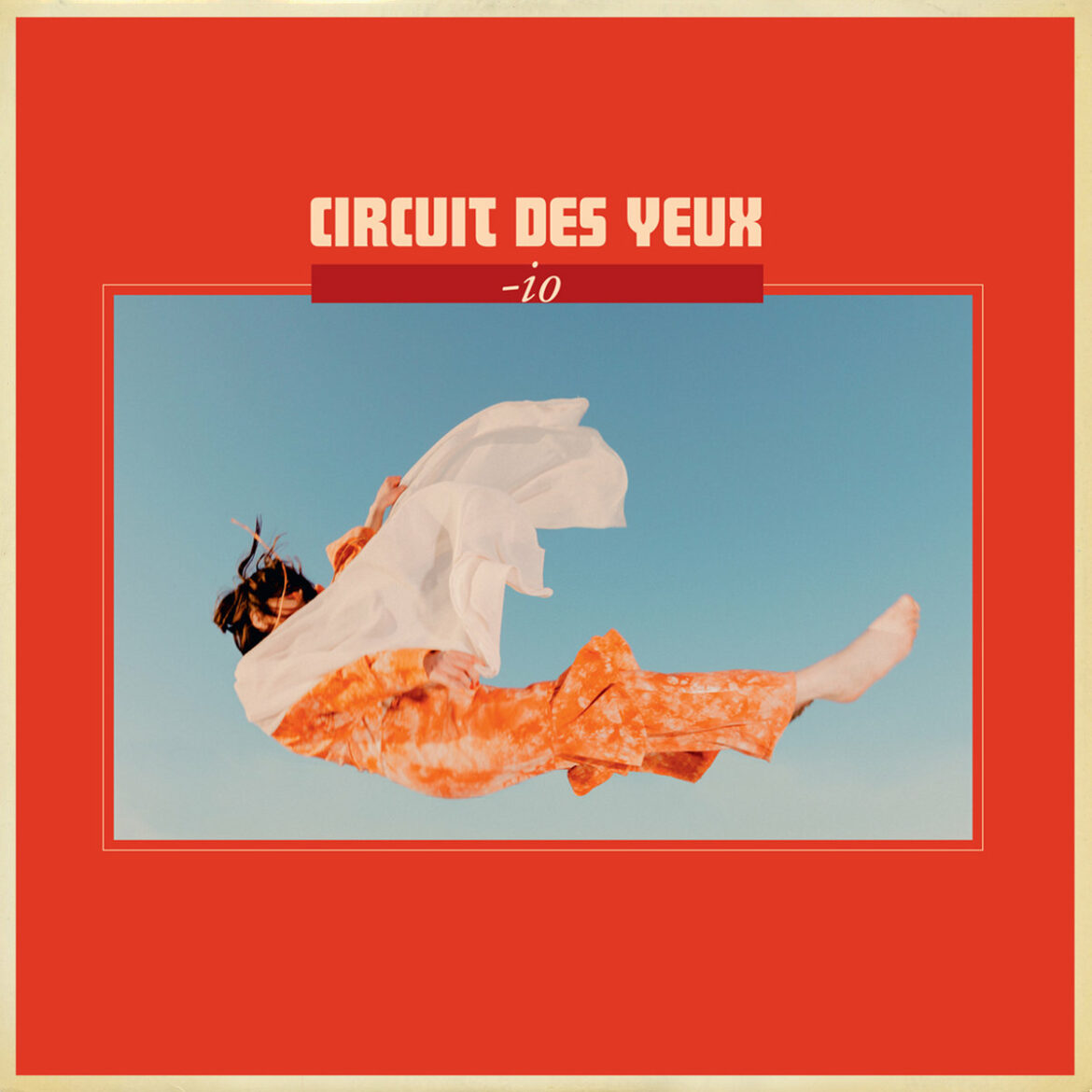 If this is your first encounter with Circuit des Yeux and multi-instrumentalist, composer, artist and producer Haley Fohr‘s provocative four-octave vocals, I envy you. Regular comparisons to Scott Walker or Diamanda Galas don’t really capture Fohr’s extraordinary baritone and her almost shamanic stage presence as she reaches notes that shake the fabric of reality. On sixth album, -io, this singular voice is matched for all its intensity by Fohr’s 23-piece orchestral arrangements, channeling the album’s harrowing context with painstaking details.

Going into this album, it is essential to understand what it represents and where it came from. -io (ee-oh) is not an easy ride. It resonates with Fohr’s profound interest in understanding suffering. Her lyrics are sometimes very personal, sometimes oblique, but at all times -io boldly explores the emptiness and overwhelming isolation of grief. It is the suicide of a close friend. It is losing a beloved grandmother to Parkinson’s. It is sequential mental health crises and PTSD diagnosis. It is enduring a pandemic and hurtling headlong into environmental disasters.

‘-io’ might sound like an unassuming, dispensable term that means nothing on its own, but wrapped in those three characters is an expanding concept. Fohr realised -io felt like an actual physical place about mid-way through creating the album. Inspired by her artist’s residency at Rauschenberg’s home on Captiva Island, Florida she imagines -io as somewhere devoid of nature, with constant burnt orange skies, slashed by the metal and glass of skyscrapers; somewhere where everything is deteriorating and decelerating towards (but never quite reaching) a point of resolution or destruction. Yet -io is also about healing and sense-making. Fohr finds meaning and language for pain through a fascination with black holes and the intersection of mysticism and science, where physics, mathematics, and astronomy go some way to explain the emotional loss, denial and anguish we feel individually and collectively.

Circuit des Yeux prepares visitors to -io through its point of entry, ‘Tonglen | In Vain’, a reference to the Tibetan Buddhist meditative practice of exchanging the self with the other, or breathing out loving-kindness and inhaling the suffering of the world. We hear a long exhale, slowly overtaken by the rising anxiety of strings peaking to their discordant climax. There is a beat of silence, barely enough to contemplate the words ‘in vain’, before ‘Vanishing’ drops suddenly into the empty space. The self-directed video (above) delves further into the song’s environmental themes through the lens of four characters played by Fohr, each representing a side in the climate change narrative. Beginning as a purposeful march of percussion and vibrant strings, Fohr’s voice rushes through like a cyclone, scattering the rhythmic scaffold holding it together. “Zero axiom is our hero” she booms, the first of many metaphors questioning the dangerous arrogance of absolute truths. This theme continues on ‘Dogma’, with its Morricone-style guitar flourishes and skittering percussion looping their descent into the echo chambers of blind faith: “If it’s good for you | It’s good for me”. Fohr says of ‘Dogma’, “where there is faith there is violence. The story of civilisation is complicated and layered with dogmas… Society is a necessary subversion of the self. It is through time that our quiet alarms grow with great intensity until emancipation through implosion or explosion become imminent.”

Throughout -io it’s as if we are being suspended in amber, trapped in some slow motion paradoxical tension between breaking out and breaking down. Submitting to the fear of what might come next is a critical step in the healing process. In that respect, ‘The Chase’ feels much more personal. Its claustrophobic guitar is discordantly woven into Fohr’s harsh, close-mic whispers, simultaneously intimate and dissociative. Zooming in, closely, on the flight of a young woman escaping a traumatic event, Fohr cries “help her outlast, help her run, as far as she can, 2 legs under 1 sun”, before panning out and back, turning attention on herself in a longing, reflective lament: “I could not stop until the moment passed from my own heart”. Similarly, ‘Sculpting the Exodus’ is expressed exquisitely in a visually stunning video showing Fohr’s slow-motion fall from a rooftop. This act of submitting to gravity (something she repeated tens of times during filming), conveys so much meaning and speaks to the helplessness and isolating force of depression. Insistent organ apreggios weave a lattice of gravity around Fohr’s languid, yet angelic delivery, dividing the scene into graceful millisecond frames, delaying an inevitable but unseen landing.

Pausing here (as recommended in the album’s accompanying listening notes) before we continue into -io, we’re left questioning the intent behind the ambiguous beauty of this moment.

‘Walking Toward Winter’ feels like a coda to In Plain Speech‘s pivotal track ‘Fantasize The Scene’, or at least the conclusion of the loving sentiment in that song and of the inevitability of endings. Against a rising, cosmic synth drone Fohr sings her devotional hymn, “our voices meet in the dark / first close, then closer, then your words become mine and I’m walking toward winter with you”. Its comparable simplicity against the chaotic underpinnings of -io is a tender, heart-bursting distraction that melts all too quickly. ‘Argument’ slides into its wake, splicing orchestral and electronic textures. Dramatic strings and brassy howls meet glitching 8-bit distortions and vocoder to expose the song like an apocalyptic mini-concerto, with three discrete sections, each revealing its own truth.

-io‘s last few songs venture through more of the complex arrangements Fohr penned alone at home, note by note on a sheet music program. Once written,  the next challenge was selecting each musician, recording their individual takes in layers in the studio under covid restrictions, poring over the details of how it would all piece together. Each creative iteration meant going deeper into this destructive, conceptual space. ‘Neutron Star’, a clear stand-out moment, is an oddly uplifting, even romantic-sounding track, until you learn that a neutron star is a collapsed core, born from the death of supermassive star. Its poignant symbolism becomes evident, though cryptic, through Fohr’s words “you’re heading out now and I miss you, even when you caved into that mess, you became atrophied astronomy, a neutron star is born”. A more exposed and contemplative stage is set next on ‘Stranger’, as piano and cello guide us gently at first through labyrinthine passages of dark memories. Fohr’s vocal closes in, escalating in desperation as the song ends with disturbed and harrowing effect.

Final track ‘Oracle Song’ juxtaposes classic pop balladry with nostalgic, waltzing melodies alongside incisive recollections of abuse: “I saw figures forming around you / And i’m worried that they’ll kill / Your glowing skin, unknowing eyes, what hasn’t happened to you yet / You’re surrounded by the same men / That ended me when I was 17”. As -io‘s closing cadence, ‘Oracle Song’ offers no conclusions, no sunset ending or gestalt satisfaction. Just a saddening, regretful sense of powerlessness. But then, that’s the point. Circuit des Yeux strides over the ‘tortured artist’ paradigm altogether, co-creating with the listener a humbling, healing experience through music and wild imagination. -io is a place all of us go to, Fohr reminds us we don’t have to stay.

‘-io’ is released on 22nd October via Matador Records.