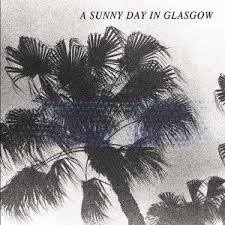 A Sunny Day In Glasgow‘s decade-long existence to date has unfortunately been a tale of obscurity and misunderstanding. The three albums which precede Sea When Absent have been both sadly overlooked and categorised incorrectly as “nu-gaze”, listed alongside the scores and scores (and scores) of acts that merely rehash the work of My Bloody Valentine, Cocteau Twins, Slowdive et al.

On Sea When Absent there are obvious, unashamed nods to the early nineties. However, they are made in the direction of the small cluster of British ‘experimental rock’ bands that existed in the same time-frame such as Flying Saucer Attack, A.R. Kane and most identifiably Disco Inferno. On their fourth album, A Sunny Day In Glasgow take the luxurious palette and cut’n’paste song-writing template of the long-deceased Essex trio and combine it with a penchant for slick modern R&B hooks.

‘Byebye, Big Ocean’ is an ideal introduction to A Sunny Day In Glasgow’s kaleidoscopic world: twin female vocals cooing and sighing around sparkling electronics and crashing percussion is ASDIG in a nutshell. However, it is on following track ‘In Love With Useless’ that they truly set out their stall with a dizzying sugar-rush pop gem that could sit happily and comfortably on mainstream radio summer playlists were it not in a process of self-immolation, cutting out when the chorus reaches its stunning climax.

It is here where the comparison to Disco Inferno is most apt; they also clipped the wings of one of their catchiest songs at base level (‘DI Go Pop’) to the point that it would be completely unsuitable for an ascent to the mainstream, but in both cases the butchering performed onto the songs accentuates their pleasures rather than hinders them when they are given more than a cursory listen.

Later there are instances where Sea When Absent finds itself in the same head-space as the future-pop of Sky Ferreira‘s debút full-length Night Time, My Time, particularly on ‘MTLOV’ and ‘Boys Turn Into Girls’, the latter of which could be traced almost perfectly onto Sky’s ’24 Hours’, though there is no suggestion that this is anything more than a coincidence.

With the exception of the roadblock of ‘Double Dutch’ as the album reaches its’ final third Sea When Absent is a glorious journey, and although it may be a commercial failure like their previous work A Sunny Day In Glasgow’s fourth album is a success by any other measure.

1 thought on “A Sunny Day In Glasgow – ‘Sea When Absent’”