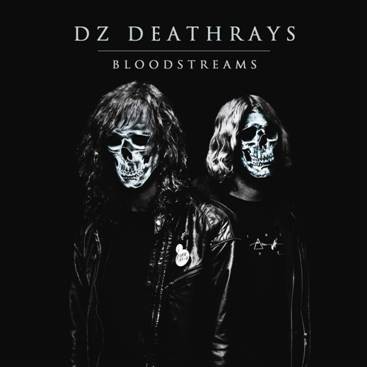 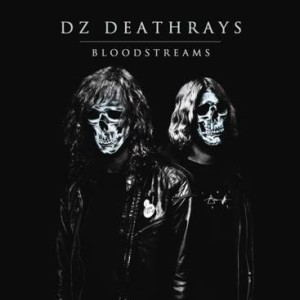 Should you judge an album by its’ cover? Jokes about The Beatles‘ White Album aside. you may well be able to get a feel for something on what the album cover is like. And with two skulls with biker jackets, long hair and -of course! -black t-shirts, even if you’ve never heard a note of DZ Deathrays‘ music, you presumably aren’t expecting Cliff Richard‘s Greatest Hits.

What may give a better insight is what it says on their Tumblr page: “thrash pop band from Brisbane, Australia. Started playing house parties will most likely end at one. This is the middle part.” And mighty fine it is, too. They probably have more in common with AC/DC than Brisbane’s much loved The Go-Betweens (well, there are blokes in both bands, and they use guitars and…er, well, it probably finishes there, to be honest), but there’s also a nod to Death From Above 1979. Proof that two people can be a band, make a glorious racket and sound like a great act.

It’s not all endless thrash –‘Play Dead’ with its’ organ sounds nods just as much to Suicide as any guitar outfit. But then tracks like the opening ‘Teenage Kickstarts’ take no prisoners whatsoever.

This may well be the middle part, though when I checked just now they didn’t actually have a wiki page. Whatever. I’m guessing quite a few people are planning on sticking around at this particular house party.