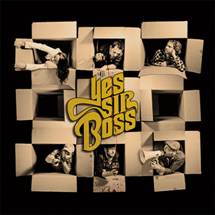 Before becoming the first act to sign with Joss Stone’s label, Stone’d Records, Bristol based ska/rock band, Yes Sir Boss, first made waves within the music scene earlier this year with their four-track EP Desperation State.

Capitalizing on the success of said EP and a reputation for delivering highly energetic live performances, the assorted six-piece act have set their sights on taking their music to the masses with their debut album, the innovatively titled,
Desperation State.

An ecstatic blast of offbeat rhythms and catchy rock hooks, the album boasts heavy influences from the British ska and reggae movements from the 1980s with delightful intersperses of classical jazz and Eastern European vibes.

Opening with the title track, the album pulls no punches with an impactful vocal harmony that forces the listener to take immediate notice before being subjected to an eruption of horn driven melodies that reek off sweaty male bravado. A sly, cool groove underlines most of the track, which along with an incredibly attractive chorus makes this a compelling and insightful start to the album.

The energy and dance-friendly sensations continue with the band’s first single, Not Guilty, an impressive combination of music genres held together by an infectious spiky brass riff. Clearly orientated around live audience participation, the track dips and peaks in all the right places leaving the listener immensely satisfied.

Serving as a perfect accompaniment to the opening tracks, Pretty Thing showcases the band’s ability to construct mature and exceptionally orchestrated
tunes with a strong New Orleans jazz element and sinister yet playful chorus.

It is at this point that the album takes a much-needed breath and lowers the pace slightly with arguably the bands only mainstream track, Mr Happy. Though evidently poppy, the strong vocal performance from frontman Matt Sellors, injects plenty of vigour and intrigue that holds the listener’s ear till the end.

Having seemingly recovered, the album kicks back into high gear with Never Know, a fun and highly animated track that serves well as a tribute to the gruff dirty ska groups of the 80s such as Bad Manners and The Selector. A live performance highlight for sure.

Stepping back from the vigorous temperament of ska, the band takes time to explore influences from Eastern Europe first with My My, an exceptional piece of songwriting that rests on a soft haunting melody and an enthralling vocal performance that gradually builds into a spellbinding grand finale, and again with the carnival-esque Na Na Ooh.

These outstanding songs are unfortunately followed by two of the albums more inferior tracks, the Spanish horned Till you Get Yours and the closing Lose No More feel awkwardly out of place amongst the cavalcade of well-written material and serve little as album filler.

Mrs #1 manages to alliviate any indifference the listener may have towards the album’s end, featuring the vocal talents of Joss Stone. The superb back-and- forth between Stone and Sellors and the complimentary nature of their voices
generates an intense sexy raw vibe making this one of the stand out tracks.

Despite a few minor inconsistencies, this is a fantastic debut album full of heart and character with heaps of fun-loving rhythms so infectious that one is almost forced to danced along.

Some may find it repetitive in places but longtime ska/reggae lovers will enjoy this fresh take on a beloved genre and commend the band’s efforts for intermixing it with various others.

Essentially, Yes Sir Boss are a band that needs to be seen and heard live to be fully appreciated however, the remarkable production on this album does well at capturing the band’s attitude and energy; preparing the listener for what would undoubtedly be a gig to remember.