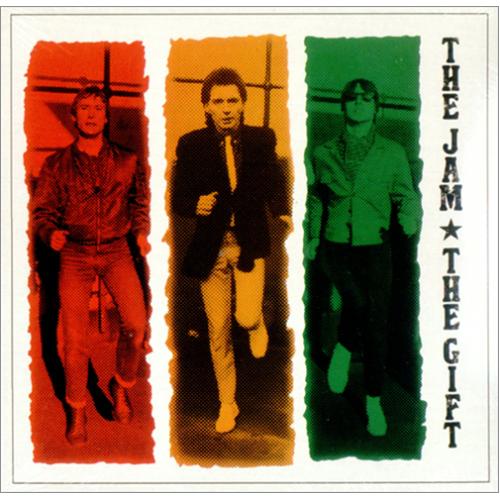 Contumacious and indecorous to the critics and fans who held The Jam with such high reverence, Paul Weller’s decision to bring the power trio to an abrupt end now seems the act of a misunderstood genius.

After six years of vitriol stuttering angular punk rock and ‘maximum R&B’ (not the only thing they borrowed off the Who), Weller chose to ‘move on up’, and to follow his more leftwing rhetoric soul dreams with the Style Council. Acrimony between his sparring compadres, Bruce Foxton (bass) and Rick Buckler (drums), on the direction they were being guided, threatened to spill over. Being a highly successful and constantly praised class act with a non-stop touring and recording schedule, these fits of opprobrious dissension and ill-feeling were always kept simmering until 1982. Much to his brethren’s surprise and shock, Weller suddenly announced that this would indeed by the last furor for The Jam, their last LP being the accomplished swan song, The Gift – Foxton and Weller maintained a twenty-year silence until the bass-player was asked to contribute to a couple of tracks on the modfather’s Wake Up The Nation LP in 2010.

As it was, they bowed out on, arguably, their greatest grand opus. The Gift marks a pinnacle in the post-punk music era. Graduating from the sneering, trebly fighter-jet strafing Rickenbacker sound of the late 70s to a sophisticated, more pronounced, mix of Stax, Motown and quasi-funky Sly Stone chops. Though this step-change isn’t entirely out-of-the-blue, those spiky heralded horns, Booker T Hammond hooks, steel drums and wah-wah licks had always been nipping at his Chelsea boot heels.

Aware of his ennui, Weller in evangelical state of fervor ploughed it all into this last album, along the way maturing as both a songwriter and musician. Yet despite the musical shifts, that same old passion and spirit remained, even as punk lost its lustre and rock music became passé – a shift in taste, which can’t have escaped Weller.

From romantic beguile and anguish (‘Ghosts’, ‘Carnation’) to shoe shuffling sociopolitical resentment (‘The Planners Dream Goes Wrong’, ‘Just Who Is The 5 O’clock Hero’), The Gift, from start to finish, sheds its evocative track list one memorable tune at a time. 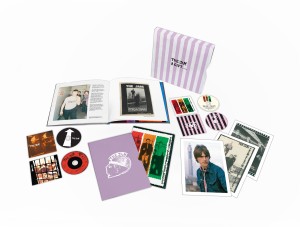 Thirty-years later this rightfully exalted album is now being treated to an extensive overhaul – a weekly if not daily marketing exercise, as every record ever recorded is given the same treatment and re-examination.

A “super deluxe” anniversary package, comprising of three audio CDs and one DVD brings together all the various singles and demos from that pivotal period alongside the original album. There’s also the previously unreleased ‘Live at Wembley’ performance from December of that same iconic year, which opens with the synonymous excited introduction, “Presenting to you live and direct from Woking, Surrey, often imitated, never duplicated…The Jammmmmm!!!”

Disc one of this worthy set is given over to the album, singles, B-sides and a few miscellaneous tie-ins. The most obvious inclusion is the triumvirate run of the double A sided ‘A Town Called Malice/ Precious’, ‘The Bitterest Pill (I Ever Had To Swallow)’, and, their last ever, ‘Beat Surrender’ singles – arguably one of the greatest and most accomplished runs in recent music history.

Debts are paid-off with the trio’s soul covers (all originally featured on the Beat Surrender EP). Not exactly a curveball choice, their versions of Curtis Mayfield’s ‘Move On Up’, The Chi-lites’ ‘Stoned Out of My Mind’ and Edwin Star’s ‘War’ are quite slack and relaxed: auguries of the impending Style Council.

Two versions of the more rare ‘Pity Poor Alfie’ are thrown into the bundle; the first integrates an indolent slinky outburst of ‘Fever’, whilst the second is a ‘swing take’ on the original, which should keep completest happy. 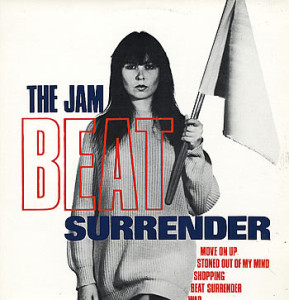 Disc two unearths a welcoming, if not sometimes interesting peak into the recording process. Loose trials and run-throughs of familiar songs show Weller and company tentatively experimenting with the principle foundations: entitled ‘Skirt’ here the eventual ‘Absolute Beginners’ shows a more lamented and casual swooning Weller and bass-probing Foxton work their way through a demo, whilst an instrumental cut of ‘Ghosts’ tugs at the heart-strings despite its stripped-back form.

Even when timings go awry, notes are dropped, or when Weller – dry as an oven chip – coughs and has to break-off from singing (Just Who Is The 5 O’clock Hero), there’s an endearing quality to everything, especially on the beatific and intimate, string-heavy, demo of The Bitterest Pill (which, rather unceremoniously, is cut-off as the recording tape runs out), and the tenderly harped Northern Soul alluded, ‘Solid Bond In Your Heart’.

Splitting on a high, the Jam’s Wembley appearance on December 3rd 1982 would be their last waltz. A solid twenty-three song packed running order of all the hits (well nearly) B-sides, covers and album track favorites are all noisily ripped through with a corrosive venom and stubbornness. Raw as ever, and equally primal in places, they mix the spit and sawdust of ‘Start’ (their tommy gun opener), ‘Down In The Tube Station At Midnight’ and ‘All Mod Cons’ with the soulful Gift material; bringing on the brass and backing singers as they move away from their punk garage roots.

Every album and seasonal change is near enough represented, and there’s even room for a bit of Mayfield and The Who – pretty much a staple of their set over the years, The Who’s ‘So Sad About Us’ is given a raucous send-off.

They finish as they start on one of their earliest blasts ‘In The City’, perhaps in recognition of how far they’d travelled, and as a final glorified nod to a past Weller soon wished to forget.

Unfortunately missing from my preview copy, the fourth disc is a collection of live performances, promo videos, a Danish TV special, and a few Top Of The Pops appearances. From the look of things the Danish Special sounds the most promising. Recorded live in studio 3 TV-Byen, Copenhagen on April 19th 1982, and broadcasted four-days later, the band plough through The Gift LP, and throw in a few surprises like ‘Pity Poor Alfie/Fever’ and ‘In The Crowd’. Something else I’ve never seen before is the ‘Trans-Global Unity Express’, a live video from Birmingham, March 1982; hopefully it will be worth the admission price.

Of all the re-issue and re-packaged releases that regularly pass through my hands, The Gift Super Deluxe is among the most worthy. A timely reminder and celebration, even if nostalgic, this marvellous box set demonstrates that why Weller may have been correct to call it a night, he’s never quite captured or bettered it.