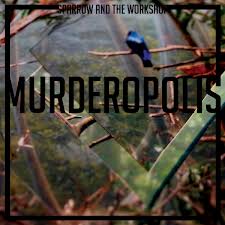 Another fine selection of releases plucked from the outer reaches of the musical quadrant, including a Caledonia showcase from Song, By Toad Records; a Portuguese chanteuse and national hero; the aftershocks from the Libyan war; woozy 80s synth-pop; and Belgian morose. 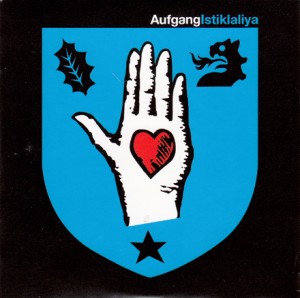 Equally keen to soak up the fervent city club scene as study the fundamentals of classicism, Aufgang’s founding fathers, Rami Khalifé and Francesco Tristano, shared an enthusiasm for fusing both vaporous piano concertos and Baroque dance together whilst attending the prestigious Juilliard School of music in New York in the early noughties.

Striking a covenant with drummer Aymeric Westrich, the dual pianist strike force of Khalifé and Tristano first began knocking out the Aufgang musical ascetic in 2005; dividing their time between solo classical composed projects and eclectic production duties for a range of artists.

Starting as they mean to go on, their latest ‘Bach meets electro’ suite draws inspiration from a host of spiritual and exotic sources, opening with the venerable sweep through the Christian Liturgy of ‘Kyrie’ – the group are in good company, both the David Axlerod era Electric Prunes and the hallowed Popol Vuh have played with the Greek appellate call to prayer. The voyage continues aboard a gypsy caravan through the Digitalism jig ‘Balkanik’, and takes a flight of fantasy on a Cathy Pacific airliner over Mali with ‘African Geisha’.

Off-kilter jazz breaks and bombastic live drums add some oomph to proceedings; especially on the rousing tribune to ‘Diego Maradona’ and the spiraling dizzying claustrophobic paean to vertigo, ‘Vertige’.

Suffused with trembling, sometimes stirring, piano led prowls, the trio marry their stonking, bounding melodies with Ed Banger Records, Simian Mobile Disco and Battles to forge something fit for the new and avant-agarde’s’. 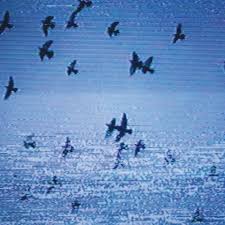 Unashamedly bathing in the afterglow of the 80s and early 90s, Glover’s memories of more innocent times are sound tracked by allusions to Depeche Mode, The Human League, Soft Cell and OMD. Wearing that old heart of his on an ever-wetter sleeve, he pines liltingly over a crystallised vista of warm ambience and melodious textures.

Echoed droplets, sweetened Eno-esque soundscapes and soft motoring Moroder synths work through hints of chillwave to create gentle vapourous atmospheres. Sometimes drifting a little too close to somnambulism at times, my ears were piqued by the despondent duet ‘Happenstance’, and the fantastical shoegaze ‘Kessler’ (which sounds like Glenn Tilbrook fronting Hot Chip).

Already featured as ‘track of the day’ on God Is In The TV, the standout glittering electro paean ‘Everyone (edit)’, with its extended dancefloor drum break finish, proves to be the albums most celebratory highlight.

Those ‘pining’ for ‘honest electronic pop’ or the missing video game sound tracks of yesteryear (for some reason the classic driving booth game Outrun keeps popping into my head) than look no further. 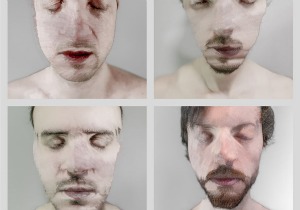 Known for taking and manipulating, to their logical conclusion (and sometimes beyond), nuanced clips of audio, inimitable electronic pioneer Mathew Herbert breaks and refines extracts of both the most fleeting and most extreme sounds to produce unsettling or thoughtful moods.

Previous ventures have followed the same pattern but perhaps the closest example is the highly rated ‘One’ triumvirate (One One, One Club and One Pig albums) series which chose a single entity with which to base an entire LP and suite around: One One was based on the artist himself, One Club took a single night at the Robert Johnson club in Frankfurt as its theme and One Pig was dedicated to…well, a pig.

His latest project literally centres on a more explosive subject, namely an episode from the Libyan civil war. Sent a recording made by the photographer Sebastian Meyer, taken during the battle of Ras Lanuf on the 11th March 2011, Herbert as an unofficial war artist in sound takes the menace, stress, threat and devastation of an aerial attack on a sonic journey. Meyer’s source material itself is transduced in the studio, ‘atomised’ into separate instrumental parts and then extemporised by Herbert’s band (Yann Seznec, Tom Skinner and Sam Beste) to form three uncategorised sections.

The original whistle and imploding rush of a bomb falling and then hitting an unspecified target is broken down into finite parts, some very subdued, whilst others hint at an ominous hell, as our ears search out recognizable hints of bird song, a barking dog, distant voices – a parallel from the surroundings of the barn studio’s ‘witness mics’, located to pick up the docile contrast – amidst a nervous silence.

‘Part 1’ begins with the payload falling to the ground and causing untold damage upon the poor unfortunates below. Rather than hearing a harrowing primal aftermath of screaming and death, we are instead enveloped by the reverberations and fed a slow tentative suspense of minimal drifting atmospherics, over an epic 25-minute investigation. A momentum slowly builds from the looming presence of machinery and subtle ‘music-concrete’ as a threatening pulse rumbles through the strewn debris to let out a gasp of movement. Morphing into ‘Part 2’, the chugging cycle thumps out a ‘meat beat manifesto’ of chaotic grinding, whilst a whimsical melodic narrative crawls out of the vacuum.

However ‘Part 3’ merges the mechanical with flitting echoes and strange escapist aquatic sirens from the sea of tranquility to create a trance like cathexis. That is until a repeated chorus of unidentified strafing objects rain down upon the poor listener, breaking the monotony of low hums and blowing windsocks to launch a last resonating offensive.

Not the most pleasant or engaging of albums, the experience is only enriched when you are made aware, conceptually, beforehand of Herbert’s source material and methodology, otherwise you’re grasping at intangible clips of oblique and obscure audio and left wondering what it all means. 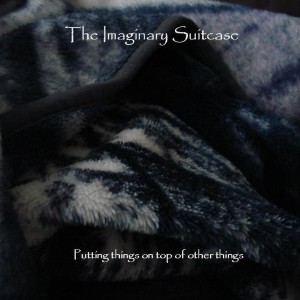 The Imaginary Suitcase Putting Things On Top Of Other Things

Leeman’s almost atavistic burr is put to good use on the second of his recent mini-album showcases, Putting Things On Top Of Other Things. A rawer, forlorn atmosphere now prevails through a sound palette imbued by the e-bow wanes and scratching snarl of Scott Walker and the esoteric brooding morose of Nick Cave.

Though indeed clichéd beyond the pale yet entirely appropriate in these circumstances, Leemans latest collection of hard worn laments is a real ‘labour of love’: apart from a horn part from Jean-Baptiste Delneuville on the Tom Waites-esque Louisiana salon diatribe – aimed at a ‘toxic’ former love interest – ‘Zombie For You’, and the re-arrangement of the traditional ‘Wayfaring Stranger’, Leemans both writes and plays everything.

Left to breathe naturally, stark and wallowing in despair, the vocals are striking throughout as Leemans travails a debris-smattered landscape, populated by Depeche Mode (hints of a Flanders sounding Dave Gahan on ‘The Punchline’) Rowland S. Howard and The Levellers (especially on the country twanged but folksy dark balled ‘Blink’).

Ceilí Moss fans will of course recognize the former lead singer’s trans-European accented delivery, even if the lights have been dimmed, the curtains pulled and the whisky poured solemnly into a cup of resignation. 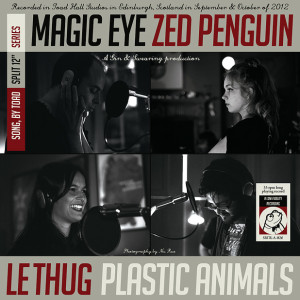 A double-bill this month from the fondly admired Song, By Toad Records stable, with the latest showboat revue of upcoming Scottish talent, Split 12”, and, newly coaxed to the label Sparrow & The Workshop, Muderopolis album.

Purveyors of esoteric, edgy and diaphanous folk, SBTR are a small but important concern, working on a low budget to produce one of the most evocative fuzzy-amorphous country and indie twanged musical soundscape catalogues.

Though a fan of Glasgow trio Sparrow & The Workshop from an early date, SBTR weren’t able, until now, to offer them space on the roster – devoid of the synonymous sums and recognition that hinder many burgeoning ‘rookie’ labels in the tentative first years. However they’ve caught the group whilst in a state of flux, as they move away from the lamented folk template laid down on previous releases for a heavier ‘live’ feel: one that bulges with spit and curled lip confidence.

Scattering caution to the winds, the Sparrow are brave enough to bend their sound to fit many genres, including traversing country and even dare I say, an agreeable up-tempo style of Britpop and shoegazing – especially the lilting melodious ‘Avalanche Of Lust’ and early 90s beaten tom paean, ‘The Glue That Binds Us’.

Peaceable and rousing in equal parts, the Sparrow’s latest opus, if you can call it that – an agreeable 38 minutes, though it feels a lot longer – proves stirring, intricate and full of vigour.

Not sure if it’s the whiff of an independence vote, or something in the Highland waters, but Scotland is producing an abundance of quality music at the moment. Song, By Toad Records collating and presenting many of the most worthy acolytes not only bring us the Sparrow’s latest gilded release but also bring to our attention a Split 12” of four other notable bands from beyond Hadrian’s Wall.

A showcase then that promises to introduce the listener to an obscure Caledonian brood of talent, plucked from Edinburgh and Glasgow; ranging from the Cocteau Twins imbued somnambulist haze of Magic Eye, to the ‘slushy’ collage radio rock of the Plastic Animals.

Adding an air of breathtaking and touching psychedelia  – via the wooing garage of Deerhunter – Zed Penguin’s esoteric reggae-gaited driven ‘Wandering’ and No Age with soul ‘Heathens’ prove illuminating, whilst Le Thug’s contributions sigh and mourn indolently over expansive guitar-textured vistas on the swan song opus, ‘Sense In Scotland’ – a resigned vocal repeats the woozy delivered mantra of “I don’t sleep well, I don’t eat well, I don’t choose well. Underneath is the floor, up ahead is the sky.” 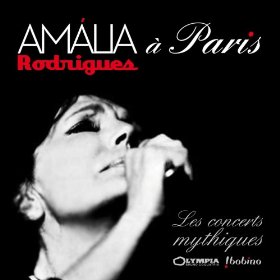 Embodying the forlorn determination and very soul of Portugal both at home and abroad, unofficial musical ambassador Amália Rodrigues was elevated to the highest echelons on the strength of her plaintive chanteuse performances and acting skills.

Sensually pitched between romantic lament and resigned tragedy, the ‘Queen of Fado’ – indigenous to Portugal, this centuries old form of mournful reflection and loss is the countries most popular folkloric style of music – is cherished, nee exalted as a heroine; her career stretching across a span of fifty years, with appearances made right up until her death in 1999.

From the honest toil of impoverishment to global fame, Rodrigues performed internationally, translating her songs into Spanish, French, Italian and English as she traversed the global circuit. Chosen for their ‘legendary’ status amongst fans and advocates, Milan Music presents two iconic concerts recorded three years apart in Paris: April 1957 at the Olympia (the single most important showcase the singer gave, later immortalised in a special documentary) and February 1960 at the Bobino.

Up close and personal Rodrigues earthy but graceful timbre swoons and pleads openly on the themes of heartbreak and injustice with just a bare minimum of rustic, threaded Portuguese and acoustic guitar to accompany her. The first of these ‘testimonials’, at the Olympia, features such notable songs as ‘Casa Portuguesa’, ‘Coimbra’, ‘Lisboa Antigua’ and ‘Barco Negro’. Whilst the Bobino features a lively Parisian crowd – a standing ovation for the French-language ‘Mourir Pour Toi’ – appreciatively applauding a concatenate of sad soliloquys: ‘Lua, Luar’, ‘Quem O Fado Calunia’, and  ‘Guitarra Triste’ to name just a few.

Amália Rodrigues connoisseurs should make room in their collections. And those yet to be beguiled by the Portuguese songbird, should at least entertain the idea.