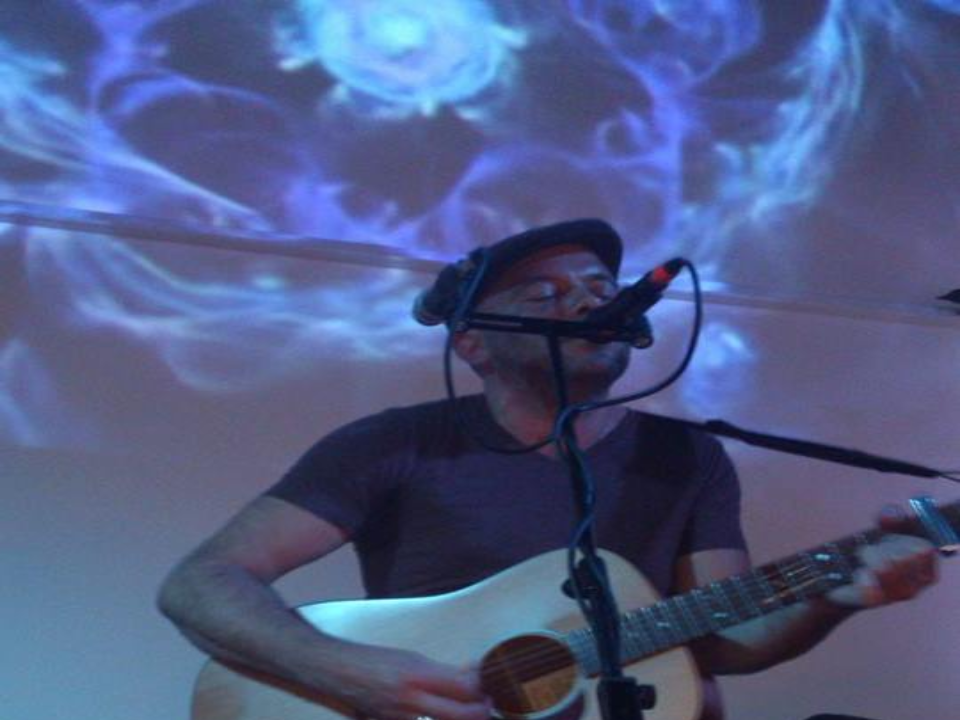 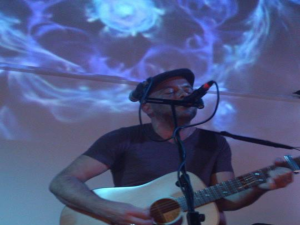 Talgarth, just north of Brecon, might usually be considered a little too far to drive to from Cardiff for a gig of this size, but with ticket prices set at a mere £3, this certainly made the prospect more inviting.

The Reverend Alan McGee, as Mark Gardener would refer to him, who now lives in this area, bought up the Tabernacle church and has converted it into an attractive micro-size venue, with a seated capacity of not more than around 100 (maybe more if the upper tier was opened up). He had set ticket prices at “1970s prices” for a reason – he knows that everyone knows he can hardly be short of a few bob, he wants people to come to the gigs at this new venue, why should he charge more? Not for him the “jumping round in glee” at the prospect of selling 200,000 tickets at £60 a pop – he’s been there, done that!

There is certainly an air of secrecy about the whole project; the question of how you might have heard about this gig arises. Evidently, even some of the locals in this tiny town have not had the place brought to their attention – both ourselves and someone who’d travelled from Gloucester had drawn a blank when asking for directions!

The DJ played familiar-sounding indie tracks, but I must confess, I can barely remember recognising the song or artist of any of them! Far better, I think, than if you go and see a 90s band and the DJ plays “all those favourites from the era that you’ll know and love” (groan).

Support act, Christian Pattemore and Phil Andrews, now known collectively as Thieves of Time, put in the kind of headline-like performance you might expect from a duo that, with Phil, included the one-time mandolin player for Page and Plant. There were certainly echoes of that other legendary duo, most particularly, the only instrumental song they played, which was reminiscent of “Gallows Pole”. Happy to chat outside, I had a photo of them beneath tonight’s super moon, and with the Tabernacle’s gravestones also forming part of the backdrop, this seemed fitting.

I had spent much of the early part of the evening looking around the small gathering of people wondering which of them might be Mark Gardener – these stars are not always immediately recognisable 20-odd years after their heyday, and indeed, that was true in this case, perhaps mainly as the former lead singer of one of Creation’s most successful groups, Ride, has lost his long locks, and sports a flat cap in their place.

Ride were like a poster-boy indie band (even with obligatory “ugly one”!), Creation-by-numbers, I sometimes felt, but they enjoyed a shortish spell of huge popularity, and one of their biggest fans happened to be one of my friends who’d come along with me, and who even insisted that we have front row seats (not that there were a huge number of rows to choose from).

The set, as with the support, is entirely acoustic, which is a bit different to how Ride used to do things – as Mark himself says, they did like a bit of feedback back in the day! It comprises a few songs that, he said, “some people will know” (although he also acknowledged that there were a good number of “in the know” locals in the crowd who may not actually have even been aware of Ride), as well as some from his more recent, not so well known, solo career. This included opener, “Universal Road”, about his dad passing away, which can’t be an easy one to sing, but was delivered with rectitude. He is due to release an album with ex-Cocteau twin, Robin Guthrie, and a couple from this forthcoming release were also tested.

Another extremely accomplished performance – very nice vocal, and only a perfectionist would have noticed a wrong note emitted from Gardener’s 12-string guitar (probably, there were none). Vague psychedelic images are projected behind, which I have to say was possibly the only weak part of the whole night – perhaps more imagination could have been used, as they had the look of something as familiar as the default Windows Media Player visuals.

Tonight was not quite the rock’n’roll night you might expect from anything to do with Alan McGee, but was instead proof that sedate can be great too! It’s a venue that is well worth a visit, especially given the treats that we were promised are in store – if you can imagine the type of contacts Alan McGee has, then you can imagine the sort of acts he informs us he has lined up for further acoustic sessions – everything from The Jesus and Mary Chain to Courtney Love (they’ll struggle to keep that one from getting into the public domain!) He also insists he’ll be keeping the door fee at £3! The man truly is a genius.