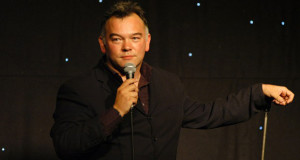 Don’t make Stewart Lee angry. You wouldn’t like Stewart Lee when he’s angry. And tonight, Stewart Lee is very angry indeed. (Fans of the comic will know the antagonistic stand-up is both a huge Incredible Hulk aficionado – having won celebrity Mastermind with the green monster as his specialist subject – and has a previous routine involving film director Ang Lee which went along the lines of ‘Ang Lee … you won’t like me when I’m Ang Lee …’)

In his second sell-out show at the Brighton Dome, Lee has finally run out of patience with his audience, and resorts to calling one member the ‘C’ word, after he has left the auditorium for a ‘comfort break’.

On one hand you can have a certain sympathy for the caustic tongued entertainer; despite the first half of the show only running to just over an hour, pre-gig drinking and/or very weak bladders has meant a succession of jack-in-the-box jumping up and down from all over the theatre, disturbing audience and performer alike.

Or is Stewart Lee just tired? Constant reminders from the man himself of just how many times he has performed these routines suggest a weariness leading to lethargy in the presentation.

Tonight’s (admitted) work-in-progress, in preparation for the next BBC2 series of ‘Stewart Lee’s Comedy Vehicle’, begins with some familiar material – the controversial subject of politically correct, 80’s alternative comedians dealing with the thorny issue of Muslim observational comedy. Lee’s metropolitan audiences recognise his stance on mainstream, TV panel show-cum-‘Live At The Apollo’ performers, (usually called ‘Russell’), whom he despises for their ability to state the bleedin’ obvious, remark upon the things they’ve seen that are the same as you and remember things from the past that you remember yourself … (ha ha hilarious!)

On this cold, wet, blustery Brighton evening though, the joke falls flat – Lee seems sapped of his erstwhile energy. I’ve seen this routine where he’s flown about the stage in mock-Michael MacIntyre flight, flapping his arms, free-wheeling to and fro before stumbling exhausted to the mic and posing the punch-line question with a supposedly observational delivery. Tonight he stands statuesque, making funny noises and pulling funny faces like a grotesque, but it lacks the vigour and oomph of the MacIntyre spoof.

The second routine falls even flatter – a take on the ‘water off a duck’s back’ maxim – involving Stew’s grandfather and a urinal somewhere overseas. Verging on the surreal, again the denouement falls pancake flat as audience bobbing is disrupting, distracting, unsettling and frankly utterly annoying.

Familiar as I am with Lee’s work, I know that blaming the audience is part of his shtick but on this rare occasion I honestly believe that he is truly infuriated. For a brief moment there is tension from within the Dome’s cavernous walls. Lee, irritated, aggressively yanks at the mic stand, considering his options. Will he let this go or, (and if I have permission from the Oxford educated comic to badly mix my metaphors) does he have the beginnings of a vented spleen moment germinating inside his furtive imagination?

He begins slowly, deliberately, playing on the audience’s guilty conscience while suggesting it is they, the lazy laughers and apathetic applauders who killed the careers and ended the lives of luminary comics such as Robin Williams. Despite Lee’s affected grief onstage, people are still escaping to the toilets and this finally tips him over the precipice.

Far from the unsatisfactory and frankly flat first half of the show being the fault of an under-par Stewart Lee, it is our mistake for not being intelligent enough to grasp the complex structures of stand-up comedy, however much Lee deconstructs the form right under our noses.

From here on I’m losing the comedian Stewart Lee; the man who promised never to sell-out, never to play large venues, instead concentrate on a core following, admitted to his shows via cheap-as-fish-and-chips ticket prices on the understanding that all his material is handwritten and not cobbled together by a bunch of failed stand-up comedians, paying off their debts inadvertently incurred while pursuing careers as stand-up comedians.

The Brighton audience is not Lee’s adoring, municipal fan club, doting on his every utterance. Instead they are (probably) drawn from his work on TV and live DVD, raised on a sickly diet of ‘Mock The Week’, Jimmy Carr and the unfortunate target that is Jack Whitehall.

The second half is a scatter-gun affair … loose ends and some seeds of ideas (I’m running out of metaphors) … and an attempt, in an election year, to make political, comedic capital from the indefatigable rise of UKIP that neither says very much nor is particularly funny, beyond the kind of toilet humour employed in the 80’s by the man that Lee holds in so much disdain, Ben Elton.

Yes, the sell-out show is a work in progress but it also leaves me wondering whether Stewart Lee has sold out, at least in the eyes of the small group of devoted followers who kept him in Ginster’s pasties and crisps and beer in the early part of his career revival that has led to (admittedly) one of the funniest parts of his recent routines when folk remark in somewhat dismay, “Terry Christian / Edwyn Collins / et al has let himself go.”

Lee rounds off the evening by laying down an open challenge to reviewers, who he seemingly openly despises. Well, I for one am not afraid to say what I think – Stewart Lee may or may not see this but if he does, I hope he can see things from a fan’s viewpoint and that not everything is our fault.