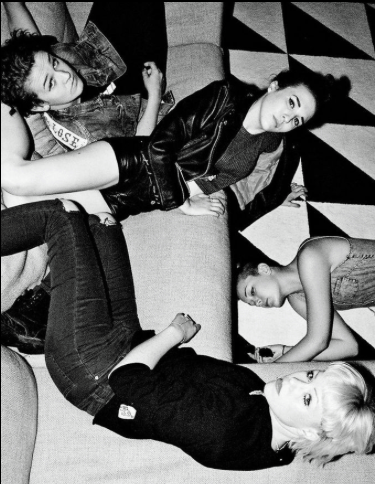 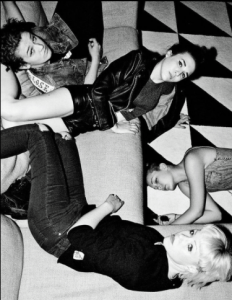 I must be the only person who thinks that the idea of doing a Misfits cover ought to come with a big bold ‘beware’ warning, written large in neon signage.  Alluding to the old adage about fixing things that aren’t broken, the classic Misfits back catalogue is rested upon hallowed ground; what these horrorphonic, psych-o-rama dudes didn’t do or say on a particular cut probably wasn’t worth hearing, or there at all in the first place.  Each escapee from their darkly twisted b-movie obsessed vault was signed by a trademark finality. Therefore, it takes a certain amount of nerve or foolhardy naivety to embark upon such a studio venture.

PINS, you’ll be happy to hear then, sit squarely in the former camp. You’ll find ‘Hybrid Moments’ staking out the groove lines on the flip-side of their new single ‘Too Little Too Late’ released just ahead of a new full length for Bella Union entitled ‘Wildnights.’ It’s a ramped up slab of rowdy retro ram-a-lama purred and shimmied in a killer 50s pogoing popsicle, candy-cute grooving.  It’s haloed by honey tipped harmonies and awash in an impishly infectious three chord blitzing that doffs its collective hat to the Ramones, whilst echoing to the butter wouldn’t melt, femme fatalism of the Shangri La’s and Shonen Knife.