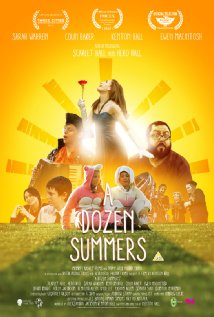 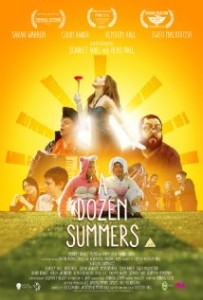 There is an awful lot going on in this, the directorial feature length debut of former Ist frontman Kenton Hall, for a film where not a great deal actually happens. This is not a criticism, far from it, as it is, ostensibly, a character study of two twelve year old girls – hence the movie’s title – trying, in their own way, to come to terms with their parents’ separation.

It’s a real family affair, with the lead roles being filled by the Hall dynasty itself – Kenton as the estranged husband Henry McCormack and his real life daughters Hero and Scarlet as our main protagonists, Maisy and Daisy.

The director himself displays a not unformidable grasp on the world of acting – his character here, for instance, would slot perfectly into an episode of Midsomer Murders, though at this point, I am unsure as to whether he’d be the eccentric owner of an olde tea shoppe with a penchant for the macabre, or a cross dressing vicar with a cocaine habit. I’m fairly sure he could pull either role off with ease.

All the child actors here give decent accounts of themselves to varying degrees, but way out in front on her own is Holly Jacobsen, whose portrayal of school “biyatch” Jennifer is coupled with an understanding of pathos and empathy – a surefire indicator that the girl has a bright future ahead of her. Despite being the sole “villain” in the piece, it’s also hard not to root for her at certain points and it takes true talent to achieve this balance. One to watch, methinks.

Endearing though ‘A Dozen Summers’ undoubtedly is, the most pleasing aspects of it are the movie and TV homages, which are plentiful and sometimes splendidly sly. Some of it is bludgeoned home with a sledgehammer – you’d have to be either a child or an absolute buffoon not to notice the proverbial cap doffing towards Stanley Kubrick‘s ‘The Shining’ or the 1957 Swedish classic ‘The Seventh Seal’ for instance (the latter, incidentally, provided me with real belly laughs) but there are other, more subtle moments that will be a joy for fellow members of the anorak brigade.

All this, and I haven’t even mentioned the film’s most celebrated players: Colin Baker, who, in a David Attenborough type voiceover, bookends the obviously Tim Burton influenced opening credits (you’d be forgiven believing Danny Elfman had been commandeered at this juncture) and its closing epilogue. But this is a voiceover with a twist, which I won’t spoil for you here!

Then there’s the inimitable Ewen MacIntosh. “Who?”, I hear you cry, and I reel off countless TV and film roles to your blank face until I eventually concede and say “Oh sod it. He’s Keith from ‘The Office’“.

It’s a small role and I can’t help thinking this may have been an ‘in joke’ by the director to stay in synch with the latter show’s largely cameo character. Either that or he’d have been too expensive otherwise, anyway!

My one criticism is the occasional burst of over the top morality which is forced upon us like a late episode of ‘Only Fools And Horses’, dripping with schmaltzy sentiment. There’s really not much else wrong with it, and while its plot is not going to win any awards for originality, it has a warmth and charm all of its own which implies that Kenton Hall is capable of going on to bigger, and better, things.

I caught up with the director for a chat:

The Seventh Seal bit made me laugh out loud…

If you only knew how much of a headache I caused everyone to get that joke in!

That was the best bit! Well, my favourite bit anyway.

I think it would look decidely dodgy if I did that…

Yeah, I sent my producer. Our very non-threatening, DBS-checked producer!

Great find in Holly Jacobsen as Jennifer, by the way. I thought she was very natural and convincing in the role. Go on, you know you want to say “but MY kids were better”, don’t you?

Hah. They’re getting their fair share of plaudits; they will manage. Holly is a very driven young actress, she’ll go far. We had a nice mix of kids. It was almost as important that they all enjoyed the work.

It certainly looked a lot of fun to make. Just out of interest, the “long” shot of Ewen in the shop towards the end of the scene reminded me very much of one of Shaun Williamson’s moments in Ricky Gervais’s ‘Extras’, and I wondered…

Nicely spotted. That was my Gervais nod even before Ewen came on board. Turned out to be kismet. I told Ewen as well.

I think those little trainspotter vignettes were one of the reasons I enjoyed the film so much, plus, being a father myself, I could relate to some of the embarrassing “dad” comments that Henry makes here and there.