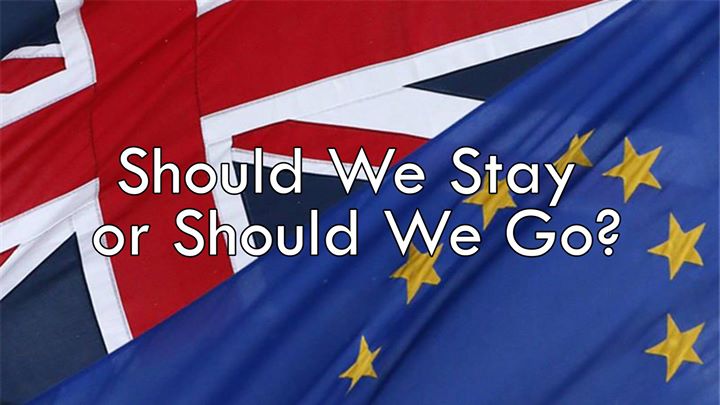 We’re in the final countdown.  This week the UK will make a big decision on its EU membership: in or out?  You decide!  Sick of conflicting smears from the rival camps, sick of division and scaremongering of immigrants?  Sick of being frightened into a decision?  Well forget messers Cameron, Farage, Gove, Galloway, Borist et al for a minute or two – let’s look at the some of the songs of the EU referendum campaign 2016 to help us decide.  Should we STAY or should we GO now?

The truth is the British songs of Brexit are rather thin on the ground, and the ones that exist are at excruciating levels of naffness.  So thank god then, for those parody pop scamps The Iain Duncan Smiths who produced a whole album of puntastic Brexit related songs in the form of a sixteen track album entitled ‘Now That’s What I Call Brexit!’

The highlights of which include the down-tuned version of ‘Killing in the Name of’ by Farage Against the Machine replete with the catchy lines like ‘some of those that are none Brits are the same that claim benefits’ replete with all the riffing and huhs of the original but with extra amusing Faragisms.

Meanwhile the excellent Borrissey provides two cuts including the chucklesome ‘First of the Chaps’ dripping with pathos and poshness it gives Boris’s possible reasons for heading up the Brexit campaign “the first of the gang with a cunning plan/ The first in the fray to go for the power play” before turning his nose up at the EU super state “I don’t like being dictated to by the EU/We could branch out on our own/Oppressors overthrown, left with their Eurozone.”

The Iain Duncan Smiths also produced an album of parody sounds about the bremain side, but more of that shortly.

Back to the feeble efforts from the leave side, Grassroots Out campaigner and former UKIP Stockton North Parliamentary Candidate Mandy Boylett‘s produced an ill thought out anti -EU themed version of ‘Four Lions’ by Baddiel and Skinner.  Boasting a video that looks like it’s been done during a fag break in happy snaps, and all the musical quality of a pissed up karaoke night it’s laughably dreadful.

Many on the left also have disquiet about the speed of European convergence, the corporate interests of the EU project.  Indeed, their harsh treatment of Greece is but one example of the heavy-handed austerity that the EU comission sometimes brings to bare on its often quite different member states.  There are songs on the European mainland that reflect this skepticism, one such is this anti-EU corruption song from German TV a pulsing early 90s dance beat ridden by an anti-EU diatribe.

Who can forget the legend that is the ill-feted ‘UKIP Calypso’ by Mike Read, let’s try and forget for a minute the hilariously unaware bad faux-Carribean accent, the dreadful sight of an aged radio one deejay mate turning up like an unwanted bad smell to deliver a patronising load of claptrap?  But the nightmarish idea of Farage as PM?  Come on.

Metamono have produced a wonderful cover of Kraftwerk’s ‘Europe Endless’, and here’s what Jono Podmore of the experimental electronic duo said about the EU: “Metamono would like to contribute musically to the debate.  Britain is part of Europe, the EU and must remain so.  Our survival as a band has been ensured by our EU supported ties in neighbouring countries – Holland, Germany, Denmark in particular.  So this cover version of the Kraftwerk classic is dedicated to the nihilists, conspiracy theorists, xenophobes, little englanders, badly educated, profoundly selfish, bitter, twisted and just plain potty who, like turkeys voting for Christmas are prepared to thwart our progress as a society.  Don’t be one of them – vote REMAIN on the 23rd June.  Thanks to Electronic Sound magazine.”

The Iain Duncan Smiths are back this time with Now That’s What I call Bremain! Daft Junck features an amusing riff on the president European and the argument he had with Farage is brought to life with their brilliant ‘Stronger, Safer, Better. ‘

Meanwhile, Kurt Corbyn‘s ‘Stay as We Are’ perfectly illustrates the impossible position Labour leader Jeremy Corbyn has been in during this referendum, advocating an EU system he doesn’t actually believe in because of his party, and that he can’t really win either way.

Manchester art-rock types Billy Ruffians meanwhile have teamed up with Indiepop superstars Nye Todd (spook school), Ian Cockburn (seven inches), EEmmi manteau (baby brave), Pete Adams (hey you guys), modern day chanson Philip Jeays and several others for the track “Exit Pursued by Boris”. A witty, satirical, scathing tune with PiL-esque vocals recorded into phones and scratchy Wire-like guitars, according to them it: “tackles the EU Referendum, its most outspoken fan, Boris Johnson and the hypocrisy we see in his “beliefs”.”

Brighton folk-pop outfit Buriers spend a lot of time touring the EU and have delivered their opinion on the confusion caused by either sides claim and counter claim:

“Our opinion: This should not be happening.  The referendum only exists as the result of a promise made by David Cameron in order to win votes from the right and will be terrible, especially for the poor in Britain, also potentially resulting in the eventual break-up of the EU, which aims to ensure and monitor fair trade and treatment of people.  BURIERS get to see a lot of the Europe that most British people never get to experience.  It is a wonderful place and we’re privileged to be allowed to visit freely.  More should and long may it continue.  Vote stay.”

With the upcoming EU referendum this week, erstwhile Super Furry Animal Gruff Rhys who delivered a luxurious love letter to the EU (“a 60 year old woman with ideals“) and the genuine “friendships I’ve felt as a touring musician living in the EU, as a child of the 1970s is all I’ve ever known”.

With an undulating Casio bed of synths and a multicolored carousel of bleeps, it’s clear it’s a song that nods to Jarvis Cocker’s politically charged solo debut ‘C*nts Are Still Running the World’ and the sophsti-pop of latter period Roxy Music.  While Gruff tenderly croons sensually about the EU, personifying and extolling her cultural “sophistication and panache” and “diversity“, glorious sights and scenes, and wittily, how she liberating him from “pie and mash“. Crucially, how she protects our human rights, from city bankers running riot, and most importantly, strengthens bonds between us as people. The repeated chorus of “I need EU/ I Love EU” sounding without the words at hand like he’s singing “I love you,” it’s another typical vocal and harmonic slight of hand from the master Rhys.  As Gruff puts it best himself: “It’s basically just an attempt to make an emotional case for mother Europe, this flawed, fantastic, potentially Utopian mega-club that I’ve been lucky enough to grow up in.”

It’s an achingly prescient and touchingly gorgeous antidote to Brexit, from a marvelously idiosyncratic songwriter.  Well, he’s convinced me.

2 thoughts on “Should we STAY or should we GO? Songs of the EU Referendum”