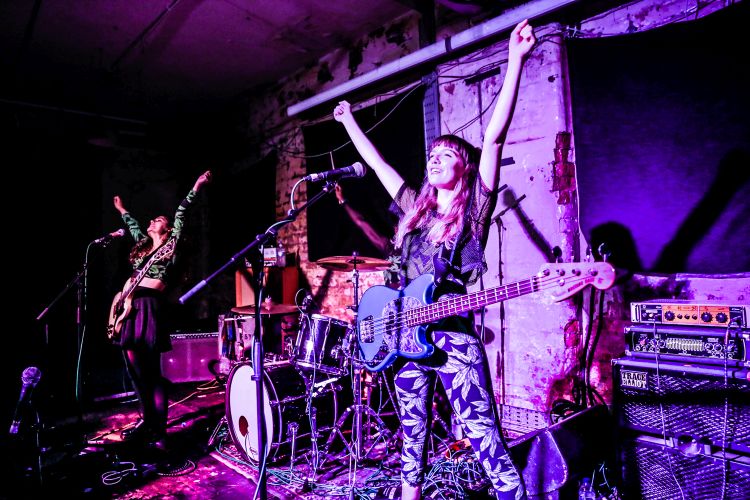 Now in its sixth year and bigger than ever, DIY Indie festival Carefully Planned returned to Manchester’s Northern Quarter this 15th and 16th October. Hosting over 160 acts across nine venues plus two after-parties and DJs, the set up was evidently one of much careful planning. Named after a song by those math-rock pioneers Faraquet, Matthew Boycott-Garnett is the main man behind this celebration of the underground. Along with a growing team of devoted helpers, he has nurtured this event into the success it is today through a strong sense of placing talent before profit. As Boycott-Garnett says himself: “The performance of live music is a wonderful and valuable thing. It should be cherished and respected as such.” Valuing the performers individualism is certainly at the core of Carefully Planned. With a price tag of just £20 for the weekend, fans can be part of a like-minded group of people, enjoying their own selections of independent music.

Gulliver’s bar was festival HQ and with wristband collection came the opportunity to scour the lovingly designed festival leaflet. Reading through this is an entertaining activity in itself, as each year Carefully Planned boasts a plethora of new genre descriptions unlike any other. With slightly bigger names such as Laura J Martin described as “abrasively famous”, these tongue-in-cheek descriptions were as helpful in their ‘tips’ sections as they were hilariously facetious.

Before Miss “Abrasively Famous” hit the stage on Saturday there came the musical delights of front man Nicolas Hirst’s outfit, the London-based Bearpark. They are redolent of the prog-rock stylings of a bygone era, with a lyrical melancholy of the modern age. Bearpark brought the crowd together with their multi-instrumentalism and floaty rhetoric in songs such as ‘What are we going to do?’. Following them was Laura J Martin herself, who despite her elfin soft-spoken persona packs a musical punch from start to finish. Her jazzy flute riffs were unnervingly complex and delivered with such gusto. Intertwined with a soulful Banshee-esque voice and you have a winning formula that kept everyone on their toes. Laura’s latest album, On The Never Never, sees the Scouse beauty go from strength to strength with stellar toe tappers such as ‘Do It’.

Following the festival’s ‘tips’ section to the small downstairs room of Gulliver’s on Saturday saw Welsh solo ‘sadpop’ performer Rosie Smith – also known as Oh Peas! – working her magic. The endearing meanderings of this delicate acoustic set were set off with bouts of dry wit. Songs from Oh Peas! wondefully titled Difficult Second Chair album, muse about broken TVs and spending days in bed in a quirky style that takes influence from other Welsh talents such as Gorky’s Zygotic Mynci. She’s an understated pleasure and one to look out for.

For something altogether more high octane, there was the punkish sensibilities of three piece Cowtown. As darkness prevailed outside 57 Thomas Street chilled audiences were soon warmed up by the thrashing two-minute wonders of this constantly evolving group. Founded by Hilary Knott, the cool New York vibes of this band certainly don’t betray them as hailing from Leeds. Their album Paranormal Romance is very effete yet upon closer listening, distinctly northern too. Cowtown are just one of the great musical juxtapositions in a festival of contrasts.

Girl band The Tuts playing at Soup Kitchen had a reported near run-in with the law on Saturday as they apparently nearly suffered a van collision in a bustling alleyway, trying to arrive for their gig. How more chaos did not ensue was a mystery, as most of the venues could barely cater to the burgeoning crowds that turned out. It was here at Soup, if timing and fortune were on your side, that a pint of  hand brewed A Carefully Planned Ale could be yours. Deliciously citrusy and refreshing, this was brewed by members of the team the week before in Marble Beers Microbrewery. The only trouble seemed to be, there was scarcely enough of it to go round!

One of the live acts rounding off proceedings on Saturday was the drum and guitar duo of Alimony Hustle. Playing under the crumbling ceilings of the charmingly fire-damaged Crown and Kettle pub, they really stonked their set through to midnight and beyond. Alimony’s Leah and Matt purportedly see “the guitar/drums duo reclaimed from crown prince jemble Jack White; and minions” which is just as refreshing as it sounds. Tracks such as ‘Zero Chill’ off their All Strikes No Gutters EP were a particular highlight, with the Bristolian pair indeed providing “the non-White Stripes” listening experience that they clearly set out to achieve.

Saturday’s after-party in Aatma was an affair to remember, despite the amount of craft ale consumed, with great DJ sets from Underachievers, Dots and Loops and Super Smash Hit Records. It was a thoroughly joyous affair of dancing and wristband losing that saw the festival go over the hill of the first day.

As the cracking hangover of Sunday loomed, it was a thankfully more subdued turn out for this second day of shenanigans. Recently revamped club, Texture, hosted the incredible stamina of Vibracathedral Orchestra. Melding psychedelia in a new and accessible way, this Leeds collaboration was an hour and a half of aptly meandering melodies that reflected the bleary eyed delirium of much of the crowd.

Brunch, playing back at 57 Thomas Street, was another of Sunday’s highlights. The London quartet admitted a crushing hangover after a wedding the night before, yet still managed to storm through their set of so-called “Pavement-esque” tunes. Their bittersweet lyrics of misguided romance warmed the cockles of audience members’ hearts. Songs such as ‘Taxi Feelings’ seemed to strike particular chords and nods of recognition.

Night and Day was perhaps a less well-attended venue of the festival, but still one where exciting things were going on throughout. One such exciting thing came in the form of Fishtank on Sunday. Providing polished tunes and a very neat ensemble this band from the coastal Kent town of Broadstairs sung out coming-of-age melodramas in the form of songs such as ‘The Bends’ in rousing fashion. Flitting between venues were the tirelessly busy volunteers of the festival who really seemed to be holding everything together in a remarkably capable manner despite the scale of this year’s event. It was truly impressive.

As one of the organisers, Tilly Makemson, said on Sunday “I was watching Rice Milk earlier and nearly just had a little cry to myself thinking, look what we’ve achieved.” It is this devotion from organisers and festival goers alike that sets aside Carefully Planned as a thoroughly nurtured labour of love. It is a festival that sings birthday accolades to Dads in the audience as well as embracing the wonderfully weird. Everyone can come along and feel at home in Manchester’s Northern Quarter for the entire weekend. No judgements are made and there are some damn good beers to boot.