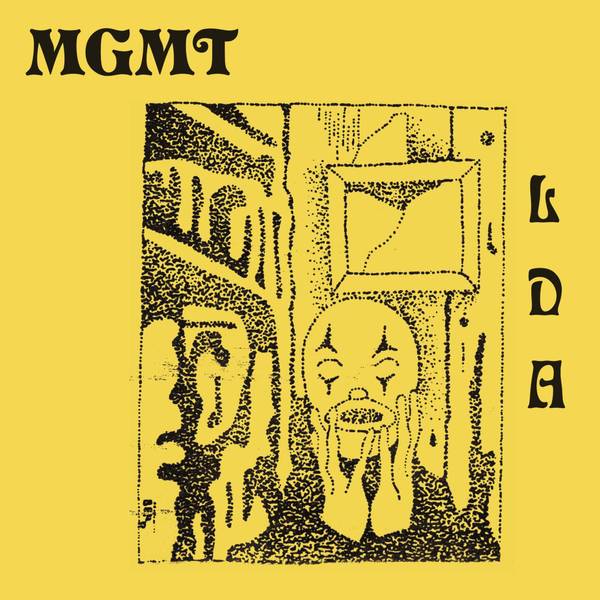 “Get ready to have some fun!” When musicians sound like they’re having fun making a record, this can infectiously transmit to the listener. Although their two previous experimental psychedelic rock albums should gain respect for their unpredictable ambition, bravery, arty inspirations and uncompromising anti-acquiescing, those records felt directionless, overbearing and contained often forgettable introspective self-indulgence. In a good way, Andrew VanWyngarden and Ben Goldwasser don’t appear be taking themselves too seriously on their new album Little Dark Age, MGMT’s first album in 5 years. The record is entertaining with a drastic switch to a toe-tapping twinkly 80’s-inspired synth pop and yet at the same meaningful and relevant, which is something their antecedent fans connected with on debut Oracular Spectacular.

From the moment a female voice (Allene Norton) instructs “Get ready to have some fun!” on opener ‘She Works Out Too Much’, MGMT’s playful mood is clear. The song is a tongue-in-cheek commentary about aging people exhaustively trying to keep up with the latest generation’s gadgets and apps, with the male protagonist conceding defeat to her energetic partner in a whiny manner. “I can never keep up. Sick of liking your selfies/I’m constantly swiping it, tapping, it’s never relaxing.”

Modern technology is also narrated about on the appropriately acronym-titled ‘TSLAMP’– which stands for Time Spent Looking At My Phone – in which self-confessed cellaholic Andrew Wyngarden laments about the worrying smartphone epidemic “Turn you off but can’t detach/Signing in. Signing out.”

Furthermore, ‘Me and Michael’ is as comical about modern life as it gets. The sparkly buddy song is surprising straight-forward for MGMT. A complete u-turn from their mature serious art to 80’s dream pop cheese. However it makes more sense if you watch the music video. The song could be an Arcade Fire Everything Now style critique on how it easy it is to view a YouTube song from a foreign country (in this instance Filipino rock band Truefaith), copy it and claim it as your own. The lyrics are pretty woeful even if it’s meant to be ironic and when you pair this with the lethargic rhyming on ‘When You’re Small’  and the sugar sweet twee ‘James’, then you might miss the surreal if incomprehensible space prose from their previous records.

However, ‘When You Die’, the title-track ‘Little Dark Age’ and ‘Hand It Over’ make up for it with their deep psychological and meaningful intentions. ‘When You Die’ is about the afterlife. The song’s character can be bit confrontational and vulgar but its colourful instrumental accompaniment, including evil laughing, oriental Aneka‘s Japanese Boy keyboard and wayward country twang, make it sound like a lost soul travelling through a Tim Burton-stylized circus paradise.

‘Little Dark Age’ and ‘Hand It Over’ attempt to reflect the current mindset of a disillusioned and confused America. The latter targets Donald Trump’s presidency, “The joke’s worn thin, the king stepped in“, and like ‘Little Dark Age’ (about a new wave of personal and global depression caused by modern factors such as cyberbullying, anxiety and police brutality), it’s both gloomy and optimistic, by suggesting that the madness may now be present but it’s only temporary and will soon come to end. What a peaceful thought on a fun and purposeful release.