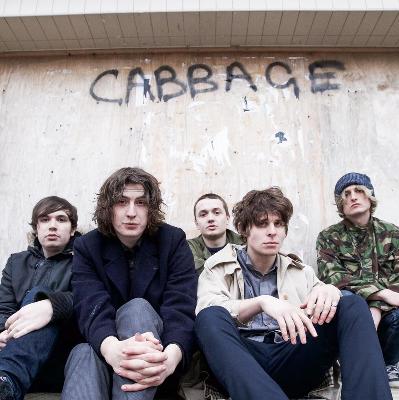 It’s always a special night when Cabbage are in town, and tonight they are appearing at Birmingham’s excellent Castle & Falcon venue, a long thin sort of a room, but with plenty of atmosphere. The band tend to draw quite a disparate array of people to their gigs: from the very youthful to the not-so, there’s a man over there who looks like one of the 1980 Dexy’s Midnight Runners line up, in donkey jacket and black beany hat; another who looks like the 1985 version of Marc Almond. It’s not a very ‘laddish’ audience.

Before Manchester’s finest (well, almost) take the stage, though, The Rhythm Method make the place their own: the keyboard / vocal duo coming across like a cross between Pet Shop Boys and Sleaford Mods. They are quite captivating and display a dry sense of humour, at one stage name-dropping Elton John: ‘It doesn’t matter if you like us, Elton John likes us and you’d never be able to write the songs that Elton John writes’. It’s probably a fair comment. They manage to win over the crowd quite comprehensively despite being almost as different to the headliners as they could possibly be, though almost certainly even more different to Sodomized Cadaver, who my gig buddy has watched perform this very afternoon, down the road at the O2 Academy.

Cabbage play a selection of 80s pop before entering (and almost filling) the modest Castle & Falcon stage, ripping straight into their gloriously grooving new single, ‘Arms Of Pleonexia’. It has a stadium-sized chorus, and is greeted warmly by the packed audience. It comes from the band’s first ‘proper’ album, the wonderfully dark Nihilistic Glamour Shots, which is due to be unleashed on the world on March 30th (their previous LP, Young, Dumb and Full Of Cabbage, was a Hatful Of Hollow-style collection of singles, B-sides and E.P. tracks).

‘Necroflat In The Palace’ is already a firm ‘old favourite’, with it’s pre-chorus of “I was born in the NHS / I wanna die in the NHS” heartily sung back at the band. You can even buy an ‘I was born in the NHS’ T-shirt, if you so desire. The Cabbage classics keep coming; ‘Fickle’, ‘Indispensable Pencil’ and former single ‘Terrorist Synthesizer’ keeping the crowd on their toes. The band, who perhaps unfairly have something of a shambling image, sound invigorated and stronger than ever; there’s a real sharpness to their tour-hardened sound.

The band perform just four songs from the new record, probably because it isn’t out yet, but they pick the right ones, a rousing ‘Preach To The Converted’ a highlight, a short, sharp song showing the very essence of Cabbage. They don’t bother with the two previous singles, ‘Gibraltar Ape’ or ‘Celebration Of A Disease’, despite both being on the new album.

The epic ‘Tell Me Lies About Manchester’ is significantly overhauled, with a lengthy drum machine intro. The lyrics are typically Cabbage, who else would include lines such as “I’m John The Postman’s nephew / And Stephen Hanley’s niece”. It’s no surprise that they reference The Fall, as there are definite echoes of that band in the Cabbage DNA, though they are nowhere near copycats.

‘Tell Me Lies…’ is sandwiched by the always-welcome incendiary ‘Dissonance’ and fan favourite and early single ‘Uber Capitalist Death Trade’, which is announced as the last song, but then followed by the band’s Nancy Sinatra cover ‘These Boots Are Made For Walking’.

As they leave the stage, the glorious sound of Beach House‘s ‘Myth’ permeates the venue, another unexpected twist in a marvellous night’s entertainment.