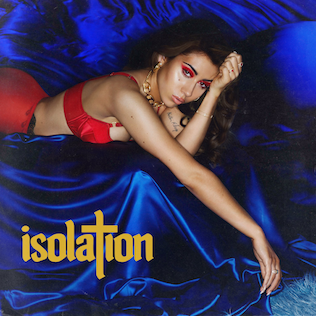 Isolation, the debut album by Colombian-born Kali Uchis has been three years in the making. It arrives six years after her mixtape Drunken Babble. In that time she has released several singles, an EP and worked with artists as diverse as Miguel, Gorillaz and Tyler The Creator. She’s obviously well-connected — Isolation is full of guest spots. Time taken and collaborations are often a sign that an artist might lack confidence and need a helping hand, but this is not the case here. Uchis has put together a gorgeous, genre-hopping record that’s the strongest and most refined debut in years.

Isolation begins with the breezy ‘Body Language’ interlude which features a trademark twisting bassline from Thundercat and a sweet bossa nova rhythm. ‘Miami’ follows and oozes Uchi’s nonchalant attitude, “ain’t here to be cute, I ain’t here to impress”. She addresses an ex-boyfriend as she recalls, “he said he’d want me in his video like Bound 1, but why would I be Kim? I could be Kanye”. Her charisma and vibrant personality is on full display.

Last summer’s should’ve-been-a-hit, ‘Tyrant,’ makes an appearance and is her unique take on the reggaetón scene. The bouncing bass-line and textures paint a colourful background for Uchis to play with. She fully embraces reggaetón on the feel-good, ‘Nuestro Planeta’,where she sings in Spanish.

She shifts gears and reveals her versatility with the early-80s synth-pop of ‘In My Dreams’, which features Damon Albarn. The cartoon-like keyboards and cooing backing vocals are glorious as she blissfully sings, “everything is wonderful here in my dreams”. ‘After The Storm’ has the elegant neo-soul groove of Erykah Badu. Uchis offers a message of positivity as she sings, “the sun’ll come out, nothing good ever comes easy. I know times are rough, but winners don’t quit, so don’t you give up”. The sincerity in her delivery is powerful and endearing. The icing on the cake is the typically on-character cameo from P-Funk hero, Bootsy Collins.

‘Dead To Me’ uses swirling keyboards and a brilliant synthetic bass-line to give the song a touch of 80s upbeat funk. It’s a contrast to the fiery lyrics, where she suggests it’s not a good idea to get on the wrong side of her, “you’re obsessed with me, just let me go, you’re dead to me”. The end results are highly addictive.

‘Feel Like A Fool’ is tinged with cool retro jazz that has understandably earned her comparisons to Amy Winehouse. She sings about infidelity over a catchy brass-led melody. ‘Flight 22’ is a traditional soul ballad that has the perfect amount of nostalgia, without sounding too cliche. It features the moving couplet, “baby we’re not going to make it, at least I’m going down with you. Our baggage just be too full on flight 22”. ‘Coming Home (Interlude)’ has the same airy sun-kissed romanticism of KING’s masterful We Are King. The lush and dreamy production is as much of an asset as Uchi’s confident and revealing performances. No matter if she’s in introspective mode or singing of uplifting escapism, she’s convincing and always compelling.

With last year’s strong releases by SZA, Kehlani, Moses Sumney and the ever-reliable Miguel (plus an imminent release from Janelle Monae) it’s a plentiful time for modern R&B records. Uchis’ eclectic approach makes her harder to categorise than her contemporaries. Isolation succeeds as a whole album because she flitters through different genres with apparent ease. No matter what she attempts, the songs are brimming with ideas, memorable hooks and gleaming production. They are enhanced by her adventurous and fearless spirit which shines through on this incredible debut. I’ll be surprised if there’s a better album released all year.

Isolation is out now on Interscope.