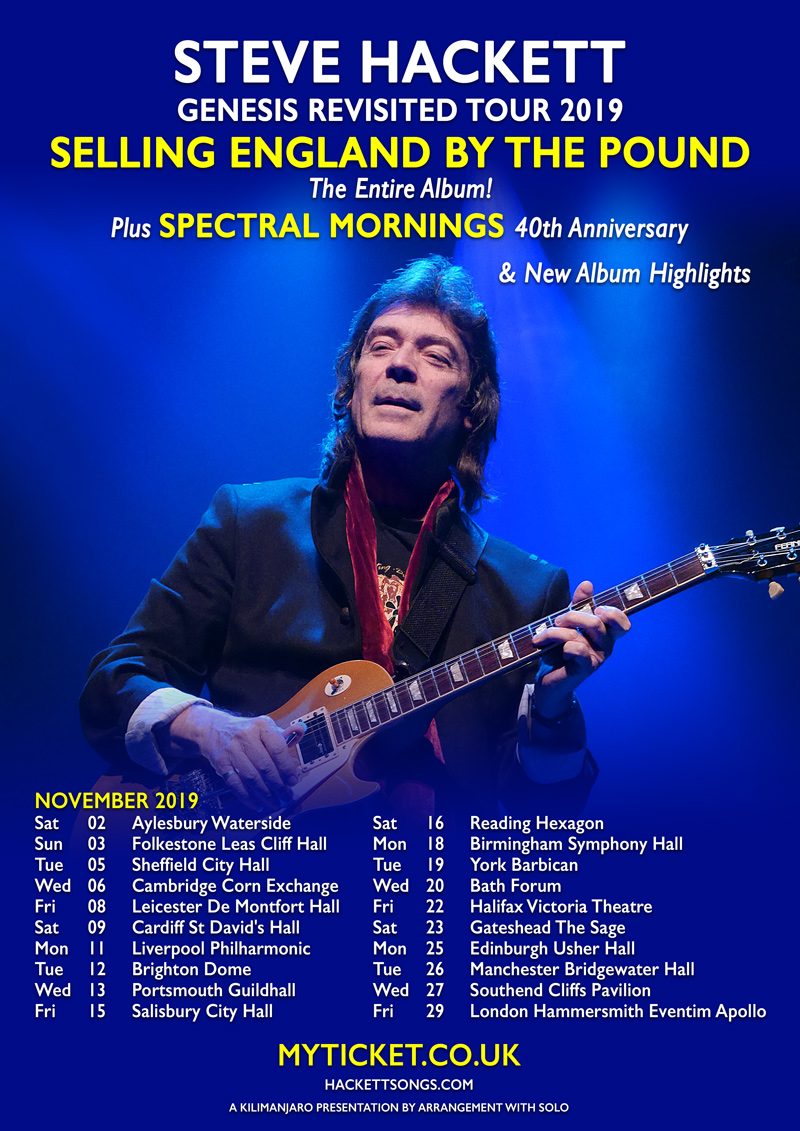 Readers of this august publication will probably fall into two camps where progressive rock music is concerned: those that are familiar with it and those that aren’t. After all it is a genre which fell out of fashion dramatically from the early 1980s.

Nevertheless it still has millions of followers and its main exponents have never really gone away entirely, at least where they are still standing. A version of Yes still tours from time to time, as does Steve Howe on his own, also Jethro Tull (who are celebrating their 50th anniversary). Some can’t. Sadly, only one third of Emerson, Lake and Palmer remain, for example.

While Genesis hasn’t toured in its core format since the 1990s one of its early members, Steve Hackett, is keeping the flag flying for prog music more comprehensively than probably anyone else. Considering that he’s close to 70 now his touring schedule is immense. He’ll be crossing Canada and the USA in September and October but returning to the UK for a series of concerts throughout November before heading off to Australia next year.

Hackett joined Genesis as a replacement for original guitarist Anthony Phillips in 1971, leaving in 1977, during which time he played guitar on seven albums, from Nursery Cryme to Seconds Out.

He’d already got his solo career under way before he parted company with Genesis, in 1975, with Voyage of the Acolyte and in total he’s recorded 25 solo albums, the most recent of which is At the Edge of Light, released in January of this year.

Over time he has come to be recognised as one of the most highly skilled guitarists this country has produced, developing the two-handed fret board ‘tapping’ technique that was to influence other guitarists such as Eddie van Halen and Brian May. Bear in mind that he’s completely self-taught; having received no formal tuition.

In 1986, Hackett formed the super group GTR with veteran Yes and Asia guitarist Steve Howe, releasing a gold-selling album, and out of which his highest-ever charting single reached #14 in the Billboard Hot 100. Later he was asked to form another super group with Keith Emerson and Jack Bruce but declined. I’m drooling at the mere thought of what they could have done.

It was in 1996 that he began to ‘re-work’ Genesis songs and some of them made it onto the album Genesis Revisited that year.

Since then Hackett hasn’t looked back and his stage shows now typically include both Genesis material and his own, the Genesis albums revolving so there is a new show each time.

His band has changed many times over the years since he first formed one in 1978. Today it includes such luminaries as Roger King (as Tony Banks), Rob Townsend (sax/flute), Lee Pomeroy (in the Mike Rutherford role), Gary O’Toole (Phil Collins) and Nad Sylvan taking on the almost impossible to recreate role of Peter Gabriel. He makes a pretty good fist of it and even manages to look like a young-middle aged Gabriel.

The forthcoming tour will be a reprise of Selling England by the Pound, Genesis’ fifth studio album and will also feature songs from Steve Hackett’s own Spectral Mornings album on its 40th anniversary and selected other songs both from the Genesis era and his own back catalogue.

There are excellent Genesis tribute bands of course, such as ReGenesis, Mama and Canada’s The Musical Box, which is officially endorsed by Genesis, but as I’m sure this video proves there’s nothing like the real thing. Or should that be the Rael thing?

As a Genesis fan and a veteran of Gabriel’s Peter Pan-like ascent to heaven at the end of ‘Suppers Ready’ at the Theatre Royal Drury Lane – still the most spectacular thing I’ve ever seen at a live music show- I’m looking forward to this immensely. Not only  that – and Genesis fans will know what I mean by this – Steve Hackett actually stands up now.

‘Dancing with the Moonlit Knight’ (from ‘Selling England by the Pound’)