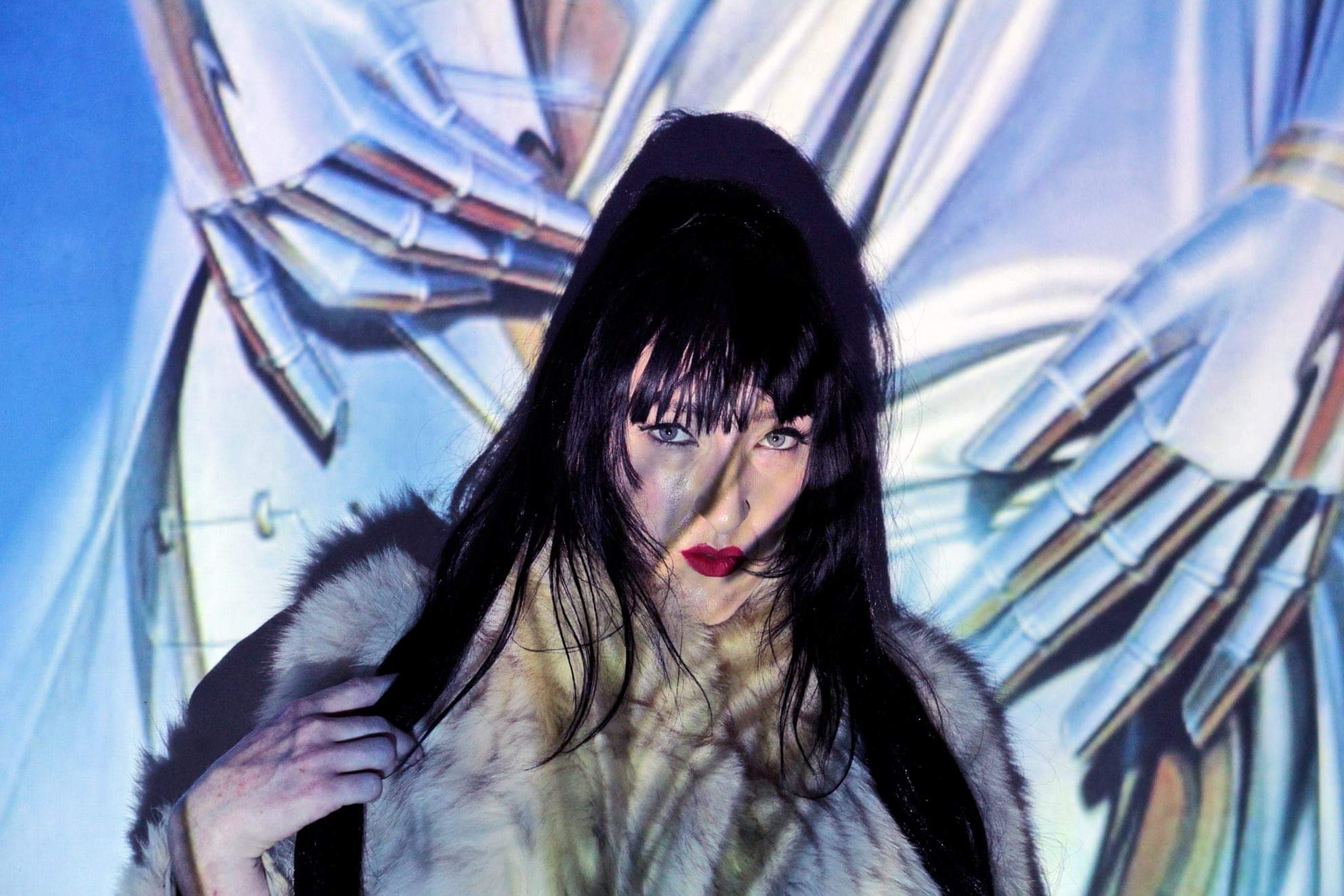 “I liked the idea of talking about those everyday rituals, eating, work, sleeping, sex, but also getting on the bus, the really unromantic mechanical things we do every day.” Emily Breeze, discussing her glorious new solo album Rituals this autumn, a luxurious lounge pop record that simmers with Breeze’s narratives that artfully sketch out tales dysfunction, death cults, serial killers, sensuality, glamorous fantasy and every day alienation.

Emily’s gift for storytelling might well be genetic – legendary Irish rebel, writer (and drinker) Brendan Behan is her great-uncle. But she’s a fantastic songwriter in her own right, an artist with a rare depth, one you can almost smell has soaked in her world of longing, insecurities and escapism as it punctures her music throughout Rituals. The first time I saw Breeze live at a Peppermint Patti show in Cardiff she captivated, wielding a guitar and a statuesque poised stance she looked every inch the 50s idol, with devastating songs to boot.

“I think as you get older you can be a little bit more honest with what you want to say with your art. I was trying to write more in the way I would speak rather than a songwritery tone, so it’s more conversational.”

Rituals ripples with elements of lounge and artful rock music, but also echoes of the cynical pop of Blackbox Recorder, the seedy kitchen sink romance of Pulp or the glamourous artful tragedy of early Nick Cave, it’s the kind of Lynchian noir pop that’s ripe with deeper meanings, cutting and knowing lyrics, always teetering on the edge of disaster but able to pull you back in.

“I was going for exotica like Les Baxter and lounge music and John Forde and Mary Paul and Chet Baker. I wanted to make a lounge album with very cutting lyrics, you know that beautiful sensual sound you get when you are drinking wine. I think that was the aim but I don’t think it turned out like that.” Laughs Breeze caustically. “It’s dysfunctional pop. there’s a song by Timber Timber called ‘Hot Dreams’, I was like ‘this is fucking the best song ever, everything I do is going to sound like this song!'” She remembers. “I’m really proud of it! We hadn’t done any gigs and I was tentative because I hadn’t been gigging very much but now we are really robust and confident. So the next one will be even better.”

The lead single ‘Limousines’ is a sumptuous tragic- Hollywood drama in a dimly lit microcosm, a spindling soundtrack to the city nightlife provided by her band is pierced by Breeze’s exquisite vocal performance’, as she sketches a letter from a fading starlet to a young drama queen. “I put loads of literary references in my songs and quotes in my songs, and often I haven’t even read the book. I must come across as really smart and pretentious but largely I have just seen something I like.”

Breeze tells me, “It’s an Elizabeth Taylor quote she says “Put on some lipstick, pour yourself a drink and pull yourself together.”  I thought that’s devastating I will use that and I though I love all that Sunset Boulevard and those very arch faded siren characters like Miss Havisham. It’s about a fading star handing over the baton to a young beauty queen, so it’s about glamour and self-pity really, it’s about entitlement and waiting for someone to come and change, it was about pulling you out of the mundane into a ridiculous setting.” She reveals.

In one of the most ridiculous yet brilliant rhymes on the record Breeze sings “these are the strangest days I’ve ever seen/give me CBT and Sertraline/ its “sashay through the decades on a vast indifferent sea” on majestic opener ‘Call in Sick Today’ that lurches from glistening torch balladry that pulls itself out of despair upon waves of flights of fantasy. “A lot of the songs are about ageing actually. I had just split up from this long-term relationship, it was really far away from my mates. When I was writing ‘Call In Sick Today’ I’d finish work I’d go downstairs drink wine play the guitar and just think ‘what the fuck has happened to my life” I wasn’t in a band and I hadn’t been involved in music for a while.”

Previous single ‘Work’ is another majestic track underscored by the creeping existential dread of modern labour. With elements of the noirish stream of conscious pop of Blackbox Recorder mingling with a widescreen ballad that has echoes of Patti Smith, framed in a shimmering pop string backed epic. It’s the soundtrack to the world gradually falling apart in an absurd state of late capitalism, insurmountable admin, antidepressants and unreachable targets. ‘Work’. The glossy sonic exterior and radio-friendly chorus acts as a foil for the ice-cold cynicism and pitch-black humour of the lyrics “which were inspired by Patrick Batemen (American Psycho) and my own experiences of hauling herself out of bed every morning to make a pointless profit for somebody else.”

“I need to pay the rent so I don’t know why I’ve released a song called ‘Call in Sick Today’ and another (Work) which is a really biting commentary on capitalism.” She laughs “Then I’m talking about it in the press and I’m thinking ‘oh god!'”

In the modern age of music being increasingly millennial, they define their identity by their online lives rather than through music. But Breeze sees the generational divide as disappearing as a consequence.

“I think that young people…. they’ve got a certain energy which is really interesting but it’s like ‘sorry kids it’s not yours any more it’s all of ours now.’ We don’t have that generation gap, so they can’t do anything to shock us anymore. But because of the social media and streaming older people can find what they want.” She observes.

Emily concedes being an older female artist isn’t always easy but she has the attitude of an artist that transcends such concerns.
“It’s hard because the industry is even more stacked against you if you are a woman rather than a guy, but I am not letting anyone tell me when and how I can make music so I am completely ignoring all of that.”

Age is a issue often ignored in music. Where the persuit of youth, youthfulness and the new is constant. Theres a pressure to be relevant. Even if you aren’t that young or new anymore. But what about artists that endure?

“I really love hearing songs written for older women like I am, my music is in no way gendered because the older I get the more dangerous I become.” She notes “I see younger girls watching me, they know I’m not 18, I’m not 25, I’m not 35. I can see their faces and they are listening and watching. That’s interesting and something quite powerful.”

She continues “Because I teach loads of teenagers they fucking love it and their motivations are they just want to make music. I think the biggest shift and why a lot of people fall off is the energy when you are young you don’t think about touring up to Blackpool for a gig on a Tuesday night. But when you are older, you think ‘oh shit nobodies going to come along and give me a suit case of unmarked bills and a private jet'”.

Seductive as it is cynical, another album track ‘Ego Death’ is a misanthropic fantasy inspired by  Emily’s unsavoury internal monologue during her bus ride to work through the bowels of Bristol town centre to an industrial estate on the outskirts of the city.  This song sees the band in full synth sleaze mode to offset Emily’s tragi-comic lyrics such as “I drink a joyless cup of Gregg’s coffee” and “Today’s specials are ego death coupled with a side of nameless longing” a tale of dysfunction garnished with Emily’s monologue that switches from brutal inner voice, it ripples with a black, irony-laden existential dissatisfaction with the mundanity of life. Its framed in the kind of delicious noirish pop that Luke Haines specialises in. If there is a soundtrack to gradually falling apart, this would be it.

“I must admit I’d never heard much of him until last year but Luke Haines is fucking brilliant and he writes just the kind of lyrics that turn me on. I like Jarvis too, I am honoured to be mentioned in the same breath as him. I like Father John Misty as well, most of my male friends are like he’s a prick, my less macho friends like him too, if you are into lyrics he’s really good. he’s a polarizing figure”

Closing the album is ‘Love song for Aileen Wuornos’ trembling reverb smeared in almost 50s guitars, frame this urgent tale about a serial killer and her tragic true story. “That one I was really moved by. I watched the documentary about her, its by Nick Broomfield. It’s very sympathetic towards her” expands Breeze. “Her girlfriend
who encouraged her to go out hooking to make money for them both, then sold her out because she had a tapped wire. Then you see her weeping in the dock because she was so in love, so it just touched my heart.”

Breeze’s sumptuous new single ‘Heaven’s Gate’ is a queasy, woozy doo-wop tune with a touch of the Western about it, her vocal is worthy of its own devotion.

Laced with Sci-Fi propaganda which was inspired by a documentary about the 90’s Christian U.F.O cult of the same name. “I am the least cosmic or spiritual person you will meet, but I love eating fast food in bed and watching YouTube documentaries about serial killers and cult leaders; who doesnt right? And I watched a really low budget film about the Heavens Gate Cult, its batshit bonkers.” Breeze recalls.

“This was in the 90s’, it’s a Christian UFO cult. They all committed mass suicide by drinking apple sauce laced with cynocide. They were all wearing identical black Nike tracksuits and trainers, those trainers were discontinued. Anyone who has got one now they go for hundreds of thousands on eBay”.

“One of the phrases I got off their website was ‘cast off your earthly shells/ become new creatures’ it’s full of this early 90s iconography. So it’s this tragic incident that I’m turning into a very camp sci-fi melodrama, the end says “drink the Kool Aid” which is a reference to the Jonestown massacre as well.” She explains “It’s interesting how people hand over all responsibility, there’s something really kinky about it and it’s also quite seductive because I don’t want to think for myself, its exhausting. So I wrote the song from the perspective of the leader of the cult.”

“I wanted it to be a little bit more honest in the songwriting, I will never be that honest because I like quite grand ridiculous narratives. I always think about the song ‘Rhinestone Cowboy’ that tomorrow he’s going to be a huge start and everything is going to be wonderful but actually he’s just a fucking loser”

Emily Breeze plays London at The Lexington on 19th October