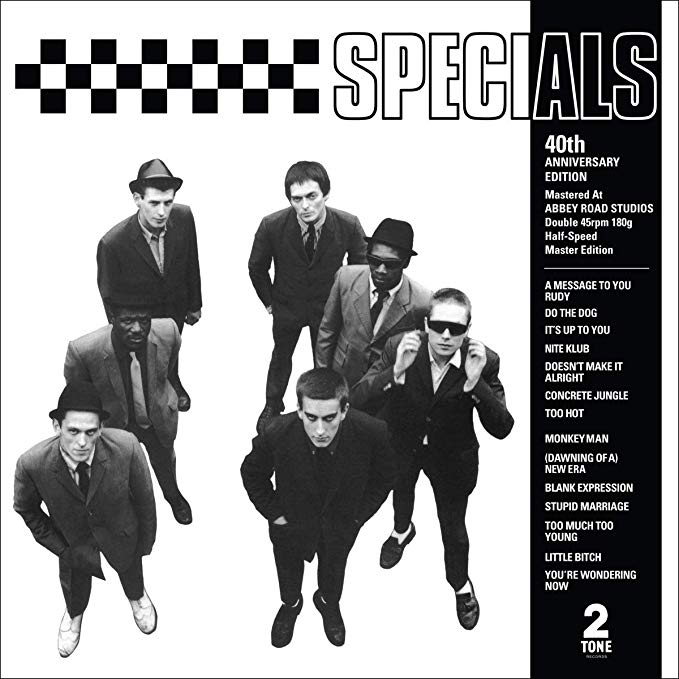 It’s a bit of a shocker when you realise that, not only is the seminal debut album from The Specials a whopping FORTY years old, but it’s also absolutely littered with rather misogynistic lyrics, from “I know you, you’re just a Little Bitch!” to “I won’t dance in a club like this – all the girls are slags and the beer tastes just like piss!”

The thing is though, the band somehow gets away with it, because Terry Hall is often merely playing a character, and not a very likeable one at that, so even if he ISN’T ‘in character’, we still think he is. And that, my friends, is why The Specials has been an ever-present in many people’s ‘Greatest Albums Of All Time’ top tens, including mine. That, and the fact that it refuses to sound dated. Ever.

It’s a little odd, it must be said, for a 40th anniversary release not to contain any bonus material, the only thing remotely ‘special’ (no pun intended) about it being that it has been remastered at Half Speed in the legendary Abbey Road Studios. If the lack of extras seems disappointing, especially as most of us can rarely tell the difference between remasters and their originals anyway, then I would urge you to purchase this version, because this time around, the difference in sharpness is abundantly clear. Where previously, the band’s take on Toots And The Maytals‘ career defining ‘Monkey Man‘ was brilliant but a trifle cluttered, here the sound is pure crystalline. Similarly, on ‘Nite Klub‘, now you actually feel like you’re there at the club with Terry, rather than just the amused/bemused observer peeping through the windows.

Musically, of course, this is the height of perfection, my only slight niggle being that the live recording of ‘Too Much Too Young‘, which topped the UK singles chart in 1980, is infinitely preferable to the more sluggish version included here, but then, that’s hardly a valid criticism because the album take had already been recorded and released before that hugely successful 7 inch dazzled us with its frenetic energy.

There’s not really much that needs adding. The Specials remains spectacular in its urgency, and joyful in its rightfully contemptuous slamming of far right, violent and/or racially prejudiced factions of society on songs like ‘Do The Dog‘ and ‘Concrete Jungle‘. And of course, The Specials’ message of love and inclusivity, which has always been obvious to anybody paying attention, comes through loud and clear. It’s just that, with this anniversary edition, that message is ten times clearer still.

The 40th anniversary edition of The Specials is out now on Two Tone.