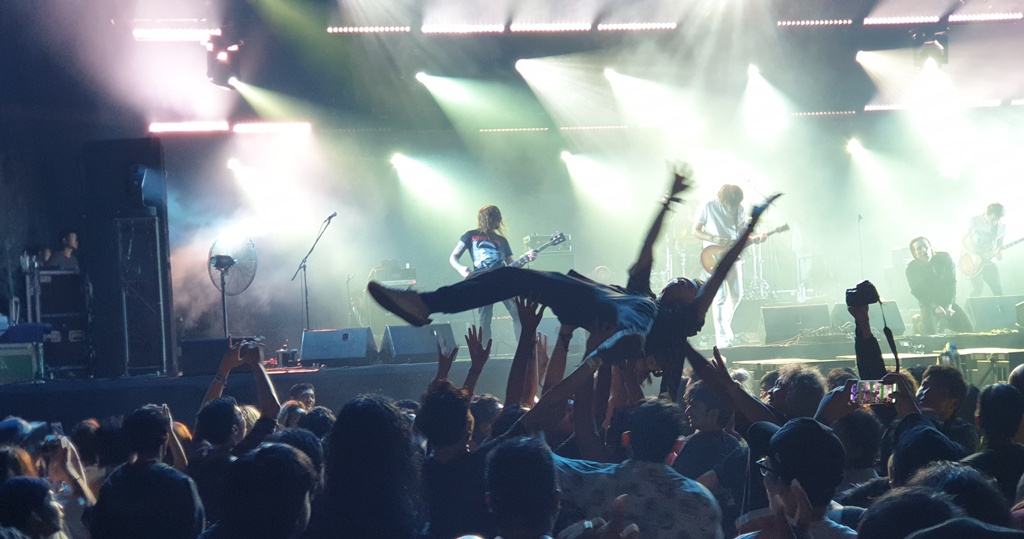 We foreign residents love to have a good laugh/moan at how disorganised Thailand can be, so the slick operation that is Maho Rasop 2019 comes as a very pleasant shock. A quick & easy wristband collection process, no beer or food queues even at its busiest, a simple electronic payment system, and a quick walk between the two main stages. Is this really Bangkok?

Well, yes it is. The festival site is something of a dystopian concrete wasteland sandwiched between two flyovers – there’s no chance of mistaking this for Glastonbury; the food stands are selling khao soi burgers (more on that later); and the only beer on sale is rough & ready working class Thai favourite Leo.

But, for once, there are some great bands in town. Now in its second year, Maho Rasop does a terrific job of bringing decent-sized indie & alternative bands to a city starved of decent alternative gigs – Slowdive headlined last time, and this year’s lineup is the best festival programme Bangkok has seen in many a year. So time to crack open an ice cold Leo and enjoy the ride…

The passage of time, and the inevitable dying out of survivors, dims the memory of atrocities and dooms humanity to repeat them. So not only is fascism on the rise in Europe and the US, but so apparently is the number of bands who sound like Level 42. I was there man. I lived through the horror of ‘Lessons in Love’ and ‘Running in the Family’, and I don’t want to go through it again. Youthful Thai/NZ popster Phum Viriphut wasn’t, and so has no qualms about holding his guitar at waist height or encouraging his bassist to embark on yet another slap bass solo. To be fair his lightweight pop-funk goes down a storm with the locals and is probably the ideal soundtrack to a sunny festival afternoon, so the opinion of a miserable old fucker like me won’t affect him one iota, but I really thought we’d killed this sort of thing off back in the late 1980s.

Over on the second stage, Isaan musician Ton Trakul is much more like it, blending the traditional melodic strains of mo lam music with more contemporary electronic sounds to beguiling effect, to a sadly fairly sparse crowd. The kind of thing that would go down a storm at WOMAD, he appears to leave the locals rather cold which is a shame, as he’s really very good indeed. 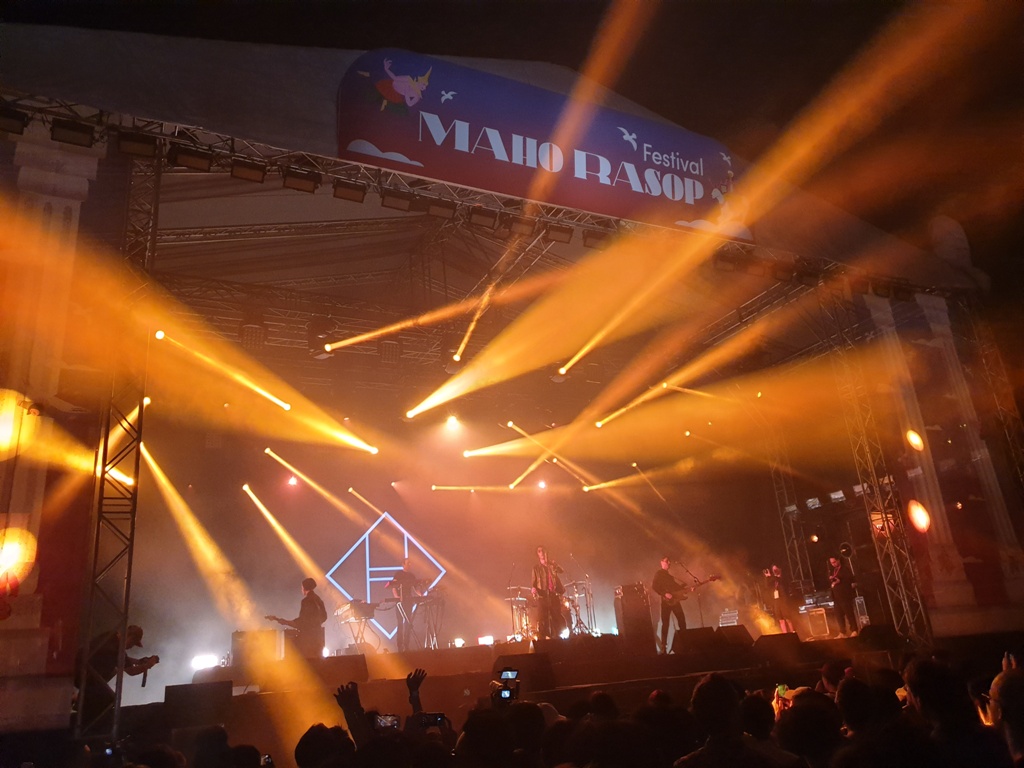 It’s telling that The Horrors begin their set with no fewer than five songs from an album that’s now over a decade old – after the brilliant double-whammy of Primary Colours and Skying they should really have kicked on and become planet-shagging stadium-filling electro-goth behemoths a la Depeche Mode, but it’s never quite happened. Apart from a couple of moments – the ever-lovely ‘Who Can Say‘ and the decidedly Mode-ish glam stomper ‘I Can’t Control Myself‘ – they just don’t have the songs: they come across as a band who spend more time practicing their rock star poses in front of a mirror or comparing dry ice machines on Amazon than actually writing decent material. There’s little interaction with the audience and it’s a strangely cold, uninvolving experience. Things only catch fire with the final song, 2018’s hands-in-the-air goth-house belter ‘Something to Remember Me By’, which sounds like the mighty Dead or Alive and is a possible way forward out of their creative torpor. 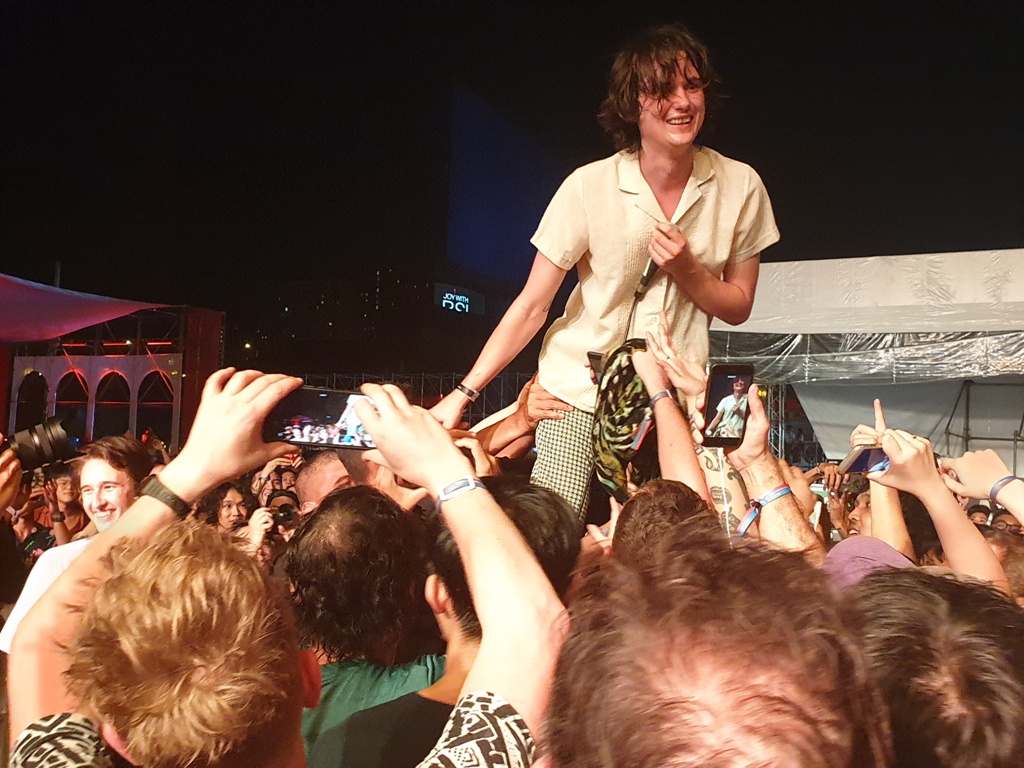 Torpor is not a word one would ever use to describe prolific Aussie polymaths King Gizzard & the Lizard Wizard, and their headlining set is an hour of pure, sustained brilliance. Kicking off with an epic ‘I’m In Your Mind’ which sparks the first moshpit action of the day, their set draws heavily on their most recent albums, with tracks from this year’s thrash metal album Infest the Rats’ Nest going down a storm with King Gizz neophytes, and a trio of songs from their 2016 masterpiece Nonagon Infinity – ‘Robot Stop’, ‘Gamma Knife’ and ‘People-Vultures’ – bringing your correspondent, and many around him, to the point of absolute hysteria. I even manage to lose my left shoe at one point. Keyboard player Ambrose ends up crowdsurfing, they end with a blistering ‘Self-Immolate’, and I go home delighted that I’m still not too old for moshpits, only for an horrific Sunday morning to remind me that I most certainly am. Bugger.

Having been well and truly King Gizzarded the previous evening, any hopes I might have had of getting to the festival early go right out of the window, and it’s almost dusk by the time I limp into the venue in time to catch Austin’s Summer Salt. Their breezy, tuneful indie-pop and summery Beach Boys harmonies, combined with more cold Leo, act as soothing balm to my aches and pains, and, with Matthew Terry’s angelic voice and a clutch of three-minute guitar pop gems, they really should be better known.

I make the mistake of leaving them early in order to see BADBADNOTGOOD on the main stage, attracted by their excellent 2015 Ghostface Killah collaboration. What I get is a Fast Show Jazz Club nightmare, a passionless exercise in formless noodling that provides ideal ammunition for people who think they don’t like jazz. My GOD they’re shit, yet their tedious, cackhanded jazz-funk is inexplicably well-received by a depressingly large crowd for what is essentially a cruise ship lounge band who’ve lucked out and landed big festival slots. “We’re going to ride this one out a little and then take it up!” announces the drummer. Not on my watch son. 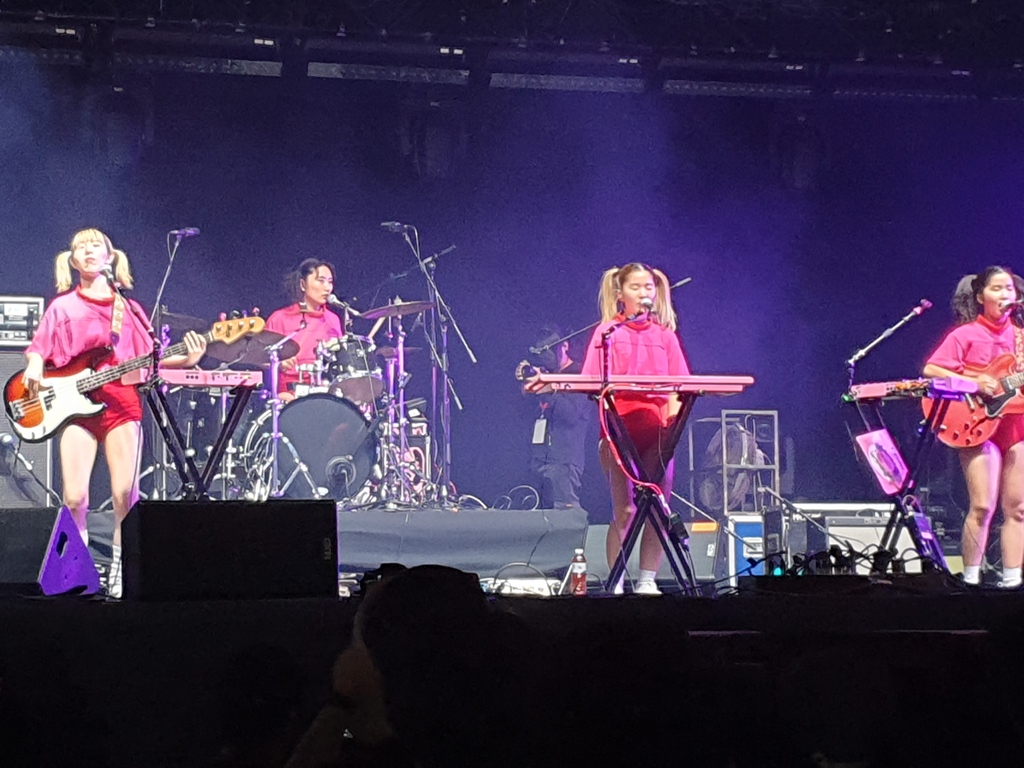 Thankfully the perfect palate-cleanser is on hand on the second stage, in the form of Japanese all-female punk-funk phenomenons CHAI, whose album PUNK is one of my favourites of 2019. Half of Bangkok’s Japanese expat community seems to have come out to welcome them and as they run out to chants of “C! H! A! I!”, it’s clear this is going to be fun. Ridiculous fun in fact – rarely have I seen a band show so much sheer joy at performing and effortlessly transmitting that joy to the crowd. A band singing ‘”I’m boring” should be an open goal for a cynical reviewer such as myself but they are the least boring band on the planet right now, whether they’re performing anti-consumerist anthem ‘Great Job’, covering Culture Club’s ‘Karma Chameleon’ in Japanese whilst waving copies of their album around, or dressing up as giant Christmas trees (obviously) for ‘This is CHAI’. By the end of their set, Japanese flags are being waved in the crowd and everyone is grinning like loons.

After all that a bit of food is required, and I opt for Soul Food’s khao soi burger, a piece of evil culinary genius which transforms the classic Northern Thai chicken curry noodle soup dish into burger form, complete with lashings of raw onion and garlic. Food purists may not approve but I most certainly do. 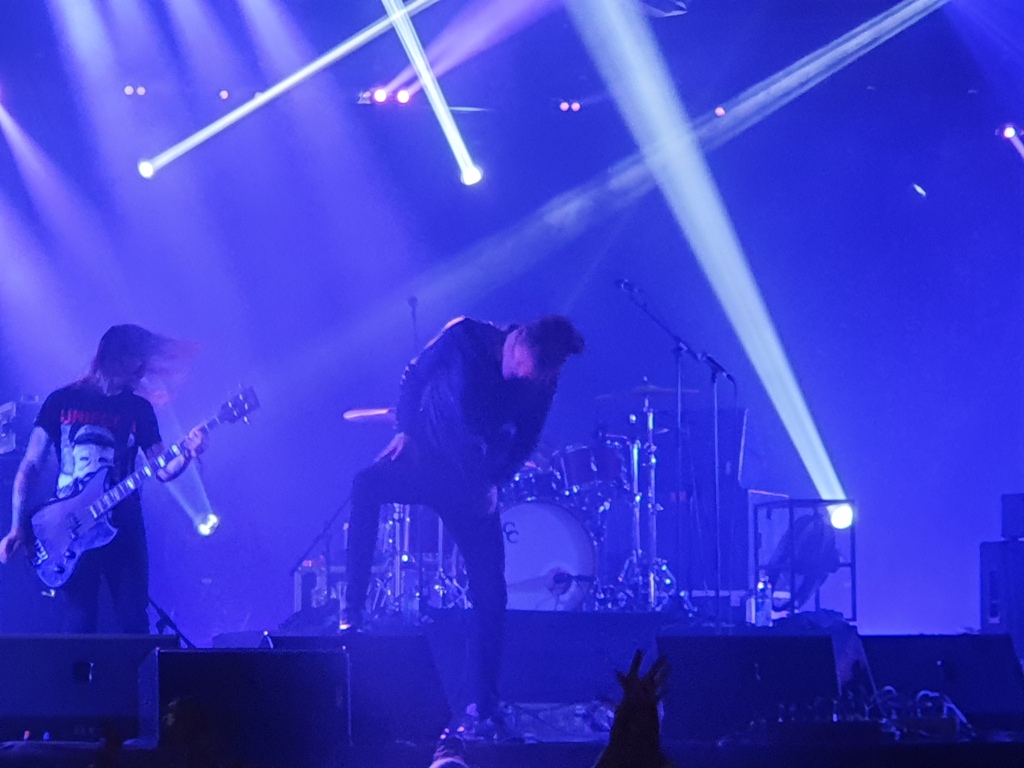 Back to the second stage, where the cartoon Japanese cheerfulness of CHAI is replaced by the glowering bad vibes of black metal-shoegaze titans Deafheaven. I come to this gig having never previously heard a single song by them, and leave as a convert. Clearly not your typical metal band – their latest album title is taken from a Graham Greene novel and their guitarist sports a Portishead t-shirt – they switch between pummelling black metal and passages of ethereal beauty, and whilst they may apparently have their doubters in the metal fraternity, Bangkok’s own metalheads go absolutely nuts for them, and rightly so. They frequently reach pitches of frightening intensity where there seems nowhere left to go, only to find another level to crank it up to, and just watching and listening to skinny, black-clad, screaming vocalist George Clarke is exhausting in itself. The closing ‘Dream House’ is an absolute cataclysm and we all walk away with thousand yard stares. What. A. Band.

How can you follow that? You can’t. Main stage headliners, the recently reactivated Bombay Bicycle Club, certainly can’t, though they give it a pretty good go. Looking like the teachers’ band on school gig night, they perform their rather dated dance-rock with considerable gusto to the biggest crowd of the weekend who clearly adore them, and even get my non-fan feet tapping on occasions. But after the sheer joy of CHAI, and the magnificence of Deafheaven, it all feels a bit flat – BBC are simply not a headline act, and I make for the exit well before the end of their set.

Well done to all involved in this fantastic event, and see you in 2020!