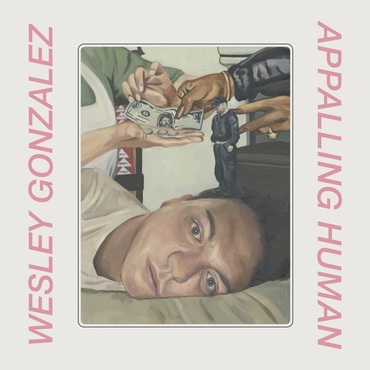 Having released 3 incredibly underrated indie- rock albums in Let’s Wrestle, Wesley Gonzales eschewed his signature sound on 2017’s Excellent Musician– inspired by Beatles style melodicism, Stevie Wonder, Al Green and early electronic music. It’s arguably Gonzales’ defining statement as an artist- his best songwriting to date and as much as his sonic palette had changed, his sense of humour and eye for detail remained very much intact. Appalling Human is very much a sibling of Excellent Musician – it moves away from the 70’s MOR of it’s predecessor and moves towards Gainsbourg funk and I’m Your Man -indebted Casiotone, a more sonically textured affair. There is something to be said for the purposefully lo-fi electronics on the record- timeless and nocturnal; embodying the melancholy of last orders and chucking out time, the ringing in the ears on the solitary walk home.

Lead single ‘Change’ is the most convincing stab at a komische-flavoured electronica on the record – its glacial synths and locomotive beat are absolutely mesmerising, but the sonic austerity, compared to his previous efforts, is something of a double edged sword. The warmth and humour of Excellent Musician is in much shorter supply. Gonzales seems in more subdued form. I’m not sure how much it suits him. Excellent Musician dealt with difficult, existential issues, but with a good dose of wryness. It still pops up in places: ‘Used To Love You’ uses thoughts about a granola bar as a beautifully poetic image, for example. Largely though, the record’s themes of routine, disappointments and interpersonal mishaps cut quite close to the bone. Some of this a real emotional trudge. ‘If I’m Sad’ is a meditation on mutual damage inflicted in a relationship, it’s tense, austere and unflinching.

‘Come Through & See Me’ probably bears most in common with Excellent Musician, a melodic bedfellow of ‘Not The Kind Of Guy’. Its flamboyant crescendo and heart-on-sleeve sincerity is something of a high point, and a rare maximalist moment on a record that is melodically sophisticated and sparse. Opener ‘Tried To Tell Me Something’ is another rare moment of sonic brightness – fluid, densely melodic and eminently danceable.

This is far from the overriding tone of the record, though.‘The Mice’, glichy and fidgety, is surreal and nihilistic – a spiritual comedown on a record that’s relentlessly naval-gazing. Musically, it’s among some of the best work he has ever produced, but it’s an unsettling, spindly little tune that doesn’t encourage repeated listens. Sometimes, the introspection really works. ‘Did You Get What You Paid For?‘, in which Wes wrestles with his self-worth and mortality, is a proper torch song, Sinatra-esque in its bruised masculinity.  Weeping brass and gorgeous backing vocals propel it into the stratosphere – it’s an album and career highlight for Gonzales.

Perhaps the most obvious shift in gear is that Gonzales’ observations are more general than usual; in some respect writing a more personal record has made the detail of the  songs less idiosyncratic. You assume offhand similes about ‘feeding sugar to a diabetic’ would have ended up on the cutting room floor in his teens. As much as this is his most musically ambitious release, it’s a hard record to genuinely love: prickly, distant and serious. These aren’t words I’d normally associate with Wesley, whose knack for light and shade is incredibly well balanced. Perhaps some time in the doldrums has proven cathartic, but this feels more like a stepping stone in Gonzales’ artistic trajectory than an essential destination.

Appalling Human is released on 12th June through Moshi Moshi.