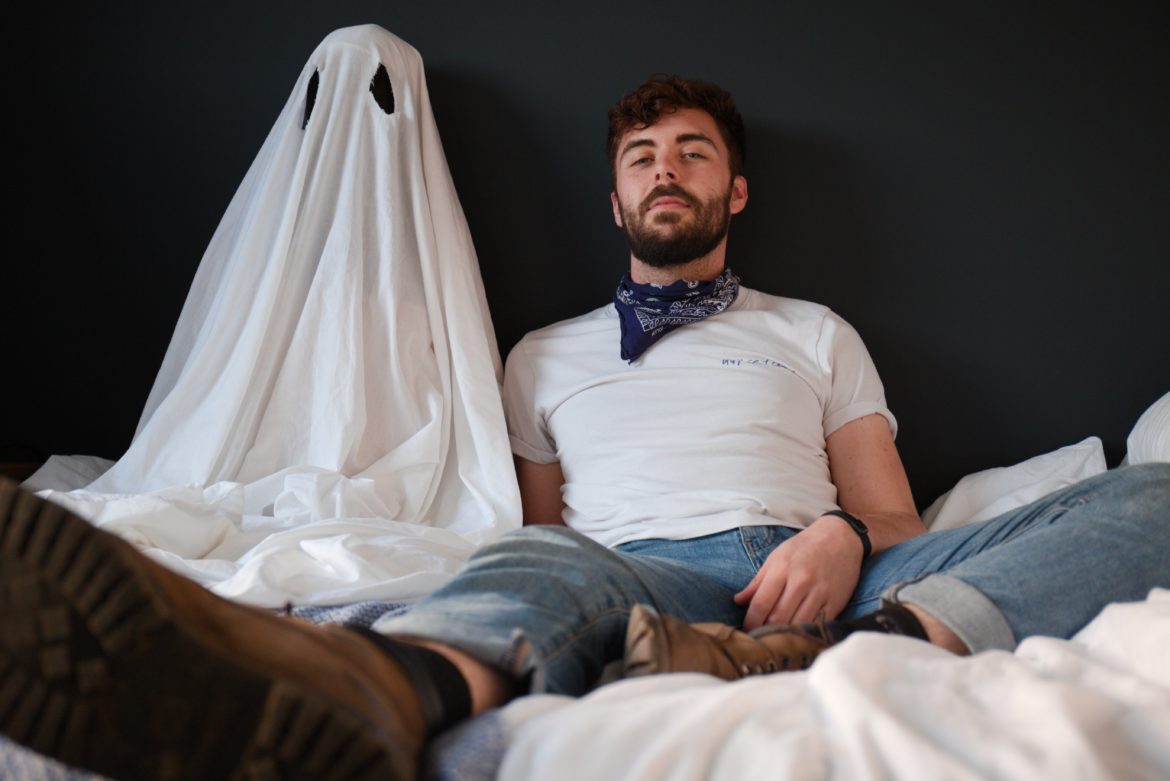 Haunting electronic soundscapes with strong pop hooks and tender vocals, Joe Hythe is a force of talent with a belt full of torch songs that will not fail to tug at your heartstrings. His latest offering ‘Ghost‘ was recently included in our Tracks of the Week list where I said: “tender and tinged with sadness, this ode to being ghosted is beautifully crafted with an anthemic chorus that feels like an instant classic. The mash-up of sadness with a synth-pop vibe is the perfect combination”. I wanted to know more about this fresh talent so I whipped out the spirit board and summoned him to ask a few questions.

Hey, I’m great thanks, just having my morning coffee before work.

Tell me about your new song, “Ghost” and the concept behind the music video.

It’s a sad-bop, a little bit spooky, a little bit kooky. I was being ghosted by a boy and at the same time- (having just got really into the occult)- I was equally frustrated about never having seen a ghost. I was like, “Huh, I’m being ghosted by ghosts… there’s a song there.” I wrote it on the piano and when I hit on the hooky chorus the door to the room swung open by itself and I was like: “OK, this one’s a winner.” Since that it’s just been a kind of magical song. The first demo on Garageband came together that same evening and it’s stayed pretty close to that original mix since.
When it came to the video I wanted to streamline the initial concept and really play off the idea of getting more attention from the dead than the living: “When you’re ghosted by a crush, get crushed on by a ghost!” I also loved the idea of the unreliable narrator, the twist at the end, the idea that I’ve been driven to madness by love to the point that I’m seeing ghosts- dancing ghosts!

It was a lot of fun. I went to school with Jonty (Director J. R. Dawson) and we’ve worked together a lot since then on other people’s music videos or short films. Our aesthetics and storytelling are pretty closely aligned too and that allowed me to put a lot of trust in him and not stress about having to explain every detail.
It was all a little bit up in the air the whole time because of Covid but by keeping things small (skeleton crew of four!) we were able to safely create the video within the government guidelines.

I have an E.P. coming out (hopefully) the first week of December, and then I’m working on a music video for it’s title track to come out at the start of next year. This first E.P. will have Ghost and Dorian on it and two new songs that tie everything up nicely. I may have already finished the following E.P. and the singles that lead up to it… I may already be prepping for more music videos… and I may be thinking about an album… you’ll have to wait and see.

I really love your song ‘Dorian’, can you tell me a bit more about the concept behind that song and what inspired you to create it?

Thanks man! I’m a big gamer and a big reader of fantasy fiction and both those genres have a really heroic roster of LGBT characters. In many ways they’ve been years ahead of TV and film when it comes to representation. I’ve felt intensely close to a number of characters in games and books over the years (at some low points they were my best friends), but I didn’t really start to examine this as a phenomenon until I played Dragon Age Inquisition. There’s this character Dorian right, and in many ways he’s nothing groundbreaking, in fact in a lot of ways he’s quite reductive: run away from a disapproving family, quick-witted, sassy, fashion-conscious… but he’s so well written and so beautifully performed and animated that I just adored him. It was like having a real crush, all I wanted to do was get home from work so I could go hunting dragons with him.

When it came to writing the song though, it was never going to be purely about that one character. I wanted to capture that feeling, that bittersweet ache that comes from being so happy but only in the realm of fantasy. That line: “grab what we can steal, f**k like what we have is real…” that’s like- the joke, that’s the punchline that I don’t think people really get: the song is a fantasy just like the love affair it’s written about.

Hard to remember… the first song I wrote on guitar was a cute Patrick Watson inspired sleepy piece called ‘Almost Heaven,’ I was about thirteen I think.

Reasonable… decimated by Covid of course and saturated with rock and metal bands, but it’s respectable, we have some great venues for a small town.

Omg… can I play Alexandra Palace? With all my friends as my band and backing singers. My producer Wikihow Adventure Cruise can be my support act.

I haven’t been able to play live as Joe Hythe yet. This summer was when I always intended to start testing things out before the singles dropped. Thanks ‘rona. So I’ll have to dig a bit further back into the memory banks and say all my teenage friends in the High Wycombe music scene.

Who would be your dream collaboration?
Orville Peck and I are gonna do the most incredible album/film when we’re married.

Right at this second I’m listening to ‘Movies’ by Weyes Blood off Titanic Rising.

Thank you so much for the support and love man!